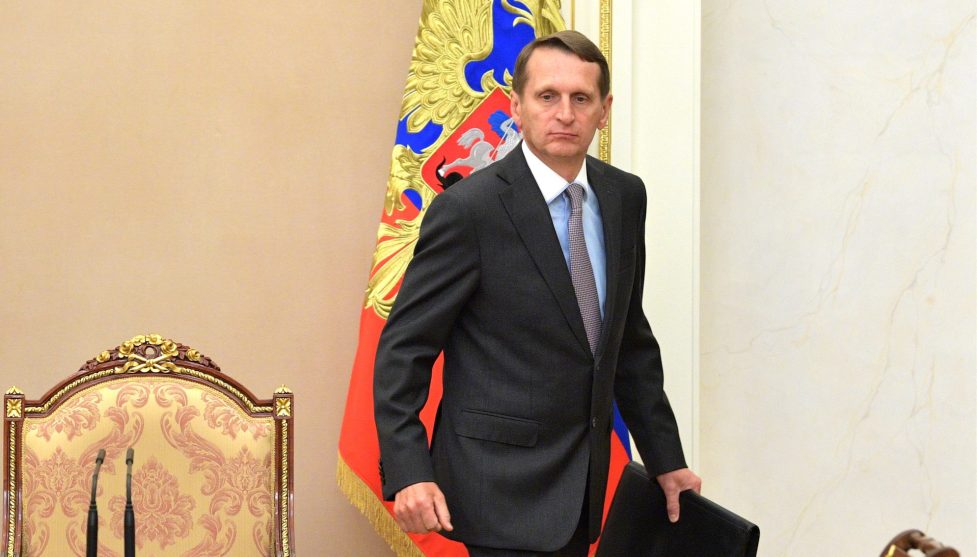 The Trump administration allowed the head of Russia’s foreign intelligence service, Sergey Naryshkin, to visit the United State last week, despite US sanctions that are supposed to bar Naryshkin from entering the country.

“Which other sanctioned Russia intelligence agency figures has the Trump administration let into our country?”

Naryshkin’s visit drew no notice at the time, but after Russia’s US ambassador Anatoly Antonov announced the visit on Tuesday, Senate Minority Leader Chuck Schumer (D-N.Y.) raised the issue in a press conference later in the day. “This is an extreme dereliction of duty by President Trump, who seems more intent on undermining the rule of law in this country than standing up to Putin,” Schumer said.

Naryshkin met last week outside Washington with Director of National Intelligence Dan Coats, Reuters reported. Antonov said that Naryshkin’s meetings addressed the “joint struggle against terrorism,” though he did not offer further details.

News of the visit drew condemnation from congressional Democrats already fuming over the Trump administration’s refusal on Monday to impose new sanctions against Russian defense and intelligence firms—sanctions that were required by bipartisan legislation President Donald Trump begrudgingly approved in 2017. (The 2017 sanctions law passed Congress with veto-proof majorities.)

The director of Russia’s foreign intelligence, Sergey Naryshkin, has visited the United States for consultations with #US🇺🇸 counterparts on the struggle against terrorism – Ambassador #Antonov
➡️https://t.co/WPeQwBMrVJ pic.twitter.com/NKl5oUaHVh

Naryshkin is among the senior Russian defense and intelligence officials who had previously been sanctioned by the Obama administration in 2014 in retaliation for Russian’s invasion of Ukraine. The move put the officials on a “Specially Designated Nationals and Blocked Persons” list maintained by the Treasury Department. People on that list are barred from entering the country. It was not immediately clear Tuesday if the administration used any formal process to exempt Naryshkin from those restrictions. The Treasury Department and the White House did not respond to requests for comment.

Schumer called on the White House to explain whether Naryshkin’s visit related to the administration’s failure to impose new sanctions Monday.

“The Trump administration must immediately come clean and answer questions.” Schumer said. “Which US officials did he meet with? Did any White House or National Security Council officials meet with Naryshkin? What did they discuss? Surely he didn’t come alone. So which other sanctioned Russia intelligence agency figures has the Trump administration let into our country?”

Schumer’s decision to highlight Naryshkin’s visit was an unusual move. In an effort to avoid the appearance that he is politicizing the growing Russia scandal, the minority leader has largely left discussion of Trump and Russia to senators on the committees involved in investigating the issue. One Senate Democratic staffer suggested Tuesday that Trump’s refusal to implement the new sanctions law, combined with Naryshkin’s visit, was blatant enough to draw attention from voters who might otherwise tune out daily stories on the matter.

Sen. Sherrod Brown, an Ohio Democrat, told reporters Tuesday that the issue hits home for ethnic Ukrainians in cities like Toledo and Cleveland. “The Ukrainian community knows all too well the efforts of unchecked Russian aggression, and they know why these sanctions are needed,” said Brown, who is facing a re-election fight this year in a state Trump carried 8 percentage points.

“Nobody in either party trusts this president to represent American national interests when it comes to Russia,” Brown said.