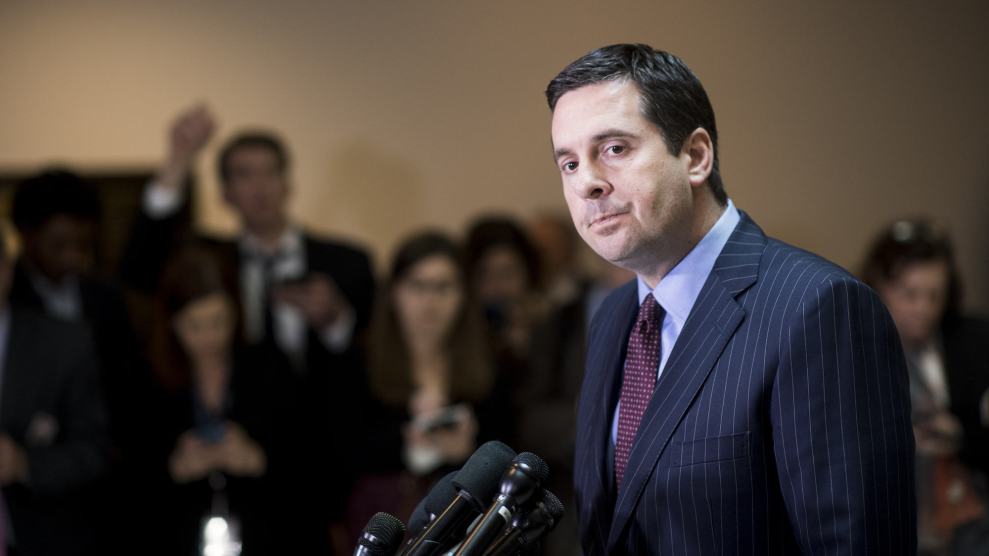 Republicans and the White House can’t seem to get their story straight on the controversial but still secret “Nunes memo,” which is said to attack the FBI and Justice Department over alleged bias in the Trump-Russia investigation. The push from GOP lawmakers, led by Rep. Devin Nunes, and the White House, to release the document appears aimed at underming the special counsel investigation of President Trump and his campaign’s ties to Russia. But now it is #ReleaseTheMemo advocates who are struggling to explain themselves.

Following Trump’s State of the Union speech last night, a C-Span hot mic caught him assuring Rep. Jeff Duncan (R-S.C.) that he would release the memo. “Oh yeah, don’t worry,” Trump said. “100 percent.” That blew up assertions by White House aides that Trump had not yet decided whether to allow the memo’s release.

Despite Trump’s comment, White House Press Secretary Sarah Huckabee Sanders stated Wednesday morning on CNN that the White House will complete a “legal and national security review” before it takes action on the memo. Yet that didn’t seem to line up with remarks from Trump’s chief of staff, John Kelly, who told Fox News radio on Wednesday that the memo would be “released pretty quick” and that “this president wants everything out.”

In a rare and pointed public disagreement with President Trump, FBI Director Christopher Wray blasted the plan to release the controversial memo, via a statement from the bureau: “The FBI was provided a limited opportunity to review this memo the day before the committee voted to release it. As expressed during our initial review, we have grave concerns about material omissions of fact that fundamentally impact the memo’s accuracy.”

Nunes’ statement appeared to amount to at least partial disclosure of information that remains classified.

The statement drew a retort from Nunes, who spearheaded said memo: “It’s no surprise to see the FBI and DOJ issue spurious objections,” he said in a statement, adding “It is clear that top officials used unverified information in a court document to fuel a counter-intelligence investigation during an American political campaign.”

His statement appeared to strongly suggest that his memo, as has been reported by news outlets, faults the FBI for knowingly including bunk research from former British spy Christopher Steele in an application for a surveillance warrant of Trump campaign official Carter Page. The problem is that the memo remains classified pending Trump’s decision—so there is no way for the public to know whether Nunes’ explosive innuendo has merit. In the meantime, the Intelligence chairman’s statement appeared to amount to at least partial disclosure of information that remains classified.

Nunes, who regularly reminds reporters that he does not discuss Intelligence Committee matters, also undermined his position earlier this week when he refused during a committee hearing to say whether his staff had collaborated with the the White House on the memo—as Nunes himself was revealed to have done in last year’s infamous “unmasking” debacle. Sanders likewise declined to say Wednesday if the White House worked with Nunes staff.

Last week Assistant Attorney General Stephen Boyd sent a letter to Nunes that warned release of the memo without DOJ first reviewing it would be “extraordinarily reckless” and might endanger national security. The letter asks “why the Committee would possibly seek to disclose classified and law enforcement sensitive information without first consulting with the relevant members of the intelligence community.”

The Justice Department’s position reportedly enraged President Trump, who dispatched White House Chief of Staff, John Kelly to squelch DOJ’s objections. Justice Department spokeswoman Sarah Isgur Flores seemed notably dismissive of the urgently worded letter from Boyd, a top Justice Department official, on Wednesday: “The letter said we wanted to review the memo,” she told Mother Jones via email. “We have. Now we have no statement.”