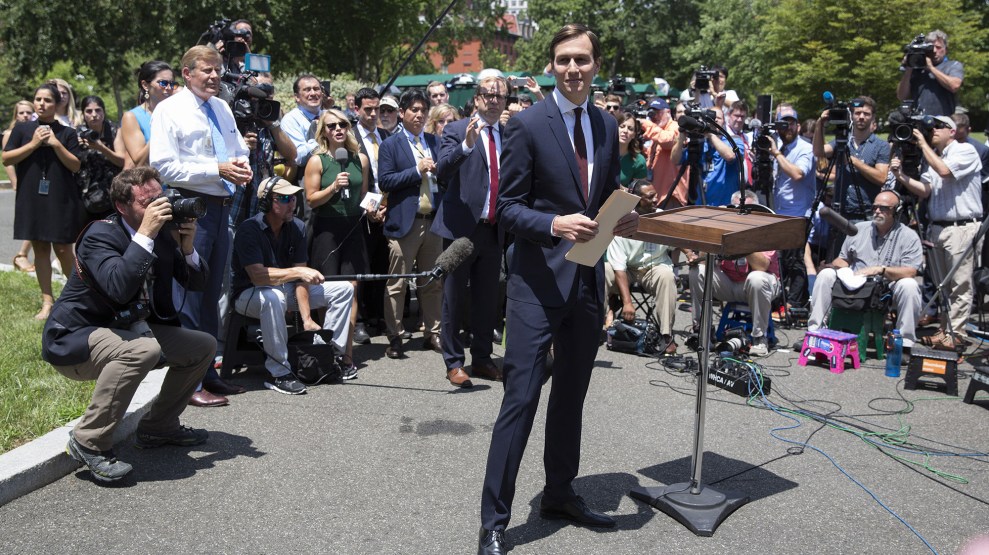 In late November, the New York Times published a piece examining Jared Kushner’s reduced role in the White House, and rumors that Kushner and Ivanka, his wife and the president’s daughter, would depart the White House by the end of the year. White House Chief of Staff John Kelly denied the rumors to the Times, saying that he’s never “contemplated getting rid of Jared and Ivanka.” With Kushner’s standing on the line, Kelly offered the Times an example of his value by praising his tech-focused White House Office of American Innovation, citing a fact-finding mission undertaken by the office in Puerto Rico after Hurricane Maria.

But roughly two months after Kelly’s boast to the Times, it’s unclear what Kushner’s group did on that trip, and there’s no evidence it remains involved with the island’s recovery effort.

White House Press Secretary Sarah Huckabee Sanders referred questions about the group and its work on the island to Josh Raffel, a spokesman for Kushner and the White House Office of American Innovation. Raffel didn’t respond to repeated text messages and emails.

The situation is about as unclear as on the island. Puerto Rico residents in a position to know, or who at least would have heard something about projects involving Kushner’s group, have nothing to report. “Nobody has mentioned at all anything Kushner is doing,” says Giancarlo González, a technology consultant on the island who has worked on development projects.

“No one I have spoken to … knows anything about direct efforts by the White House/Kushner.”

One US official who works closely with senior Puerto Rican politicians and who asked not to be identified said they “didn’t know he was doing anything down there.” That person tells Mother Jones that they contacted four people involved with relief efforts in Puerto Rico who would be in a position to know what the Office of American Innovation was doing and came up empty. “No one I have spoken to … knows anything about direct efforts by the White House/Kushner, but any assistance is more than welcome,” the official says.

Beyond Kelly’s words in the Times, the only public record of the Office of American Innovation’s involvement in Puerto Rico comes from an unusual place: Florida.

On November 3, Florida Gov. Rick Scott’s office issued a press release announcing a San Juan meeting on restoring the island’s power grid, and detailing the attendees, including representatives from his state’s utility companies. Listed above a smattering of federal officials also taking part was Reed Cordish, who serves in the Office of American Innovation.

Puerto Rico Gov. Ricardo Rosselló tweeted a picture from the meeting of Scott, Cordish, and himself looking at a document:

With @FLGovScott and Reed Cordish, @POTUS advisor on innovation and intergovernmental affairs, discussing the next step on PR recovery. pic.twitter.com/KIopSl0RrZ

Gov. Rosselló’s office wasn’t much more forthcoming. I first contacted his spokesperson seeking information about Kushner’s group in late November, after Kelly’s comments were published in the Times. While the office declined to provide any information about Cordish’s role or about any other potential efforts undertaken by Kushner’s group, after nearly two months of delay, it did send a statement simply confirming the one meeting’s occurrence: “Reed Cordish of the White House Office of American Innovation visited Puerto Rico and participated in a meeting with Governor Rosselló and Governor Rick Scott of Florida.”

When it was announced in March 2017, the Office of American Innovation was, according to the Washington Post, “viewed [within the White House] as a SWAT team of strategic consultants…staffed by former business executives and is designed to infuse fresh thinking into Washington, float above the daily political grind and create a lasting political legacy” for President Trump.

The office is full of Kushner loyalists, according to Vanity Fair, including Cordish; Chris Liddell, a former executive at Microsoft and General Motors, and WME-IMG a sports and entertainment agency; Avi Berkowitz, one of Kushner’s young assistants; Matt Lira, a former adviser to Rep. Kevin McCarthy (R-Calif.) and a Republican strategist with a background in tech policy; and Cassidy Dumbauld and Quellie Moorehead, who “both do research and manage events,” according to Vanity Fair.

The office’s most prominent efforts have been related to a June 2017 meeting of tech titans on modernizing federal IT, which included Apple CEO Tim Cook, Amazon CEO Jeff Bezos, Microsoft CEO Satya Nadella, Facebook investor and board member Peter Thiel, and Eric Schmidt, the chairman of Google’s parent company Alphabet. According to Politico, the Office of American Innovation also has worked to modernize the Department of Veterans Affairs byzantine records system.

A close friend of Kushner, Cordish has interests related to entertainment and casinos, and is the heir to a Baltimore real estate and development empire. According to his financial disclosure forms, he also holds several positions in defaulted Puerto Rican debt. A spokesperson for the Kushner Companies says Jared Kushner has no financial interests or other connections to Puerto Rico, and no plans to pursue any projects or investments connected to the island.

The simplest explanation for the White House’s refusal to provide information about the Office of American Innovation’s Puerto Rico activities may be that there’s not much to talk about. But that the lack of transparency makes it difficult for outsiders to evaluate the propriety of any efforts that may or may not quietly be underway—especially if they involve a White House official with financial connections to the island.

“It’s ironic that the Office of American Innovation is going to Puerto Rico to turn on the lights while keeping us in the dark,” says Lisa Rosenberg, executive director of Open the Government, a government accountability and transparency advocacy organization. “The rebuilding effort there has already seen questionable government contracting, and Kushner’s personal history of openness since he joined the White House has come under fire for his omission of dozens of assets and meetings on required ethics and security clearance forms. The American public is right to question what kind of deals are being made behind closed doors.”