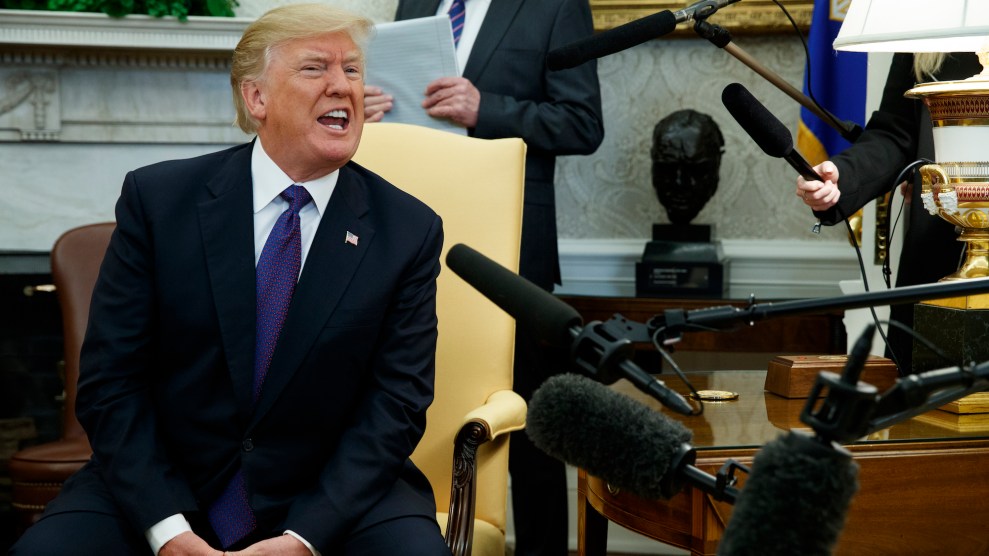 Despite a scheduling delay and potential ethics violations, President Donald Trump has still been promising to announce his much-anticipated “Fake News Awards” on Wednesday afternoon. No one outside the White House really knows for sure—and, actually, no one in the White House might know for sure. Press Secretary Sarah Huckabee Sanders neither confirmed nor denied they’d take place during a press briefing on Tuesday, calling it a “potential event.”

The Fake News Awards, those going to the most corrupt & biased of the Mainstream Media, will be presented to the losers on Wednesday, January 17th, rather than this coming Monday. The interest in, and importance of, these awards is far greater than anyone could have anticipated!

The awards would mark the latest chapter in the president’s incessant attack on the media—including endless threats of lawsuits and, recently, proposed changes to libel law—all of which make Sarah Palin’s volleys against the “lamestream media” seem quaint.

While the proposed ceremonies are unlike any attack the media has seen from the executive branch, Trump is far from the first president to declare news fake, or at the very least unfair. Many previous commanders-in-chief have offered sharp words for the Fourth Estate, here are some of the lowlights:

Washington ascended the presidency to glowing reviews in the nation’s newspapers. As his time in office wore on, though, the press’ welcome wore thin, and newspapers became increasingly critical of not only the first president’s governing abilities, but also his integrity and military reputation. While history largely remembers Washington’s refusal to seek a third term as a gracious act, the war hero actually admitted that the move was at least in part because he was sick of being publicly dragged through the mud. Writing to Alexander Hamilton in 1796 of his plans to retire, he pinned his decision to “a disinclination to be longer buffeted in the public prints by a set of infamous scribblers.”

The man often celebrated for championing press freedom found himself singing a different tune when rumors about his personal life—most salaciously, that he’d fathered a child with his slave Sally Hemmings—appeared in print during a difficult presidential campaign against John Adams. By 1807, the third president anticipated the 45th’s post-truth worldview in the words he penned to a fellow politician:

It is a melancholy truth, that a suppression of the press could not more compleatly [sic] deprive the nation of its benefits, than is done by its abandoned prostitution to falsehood. Nothing can now be believed which is seen in a newspaper. Truth itself becomes suspicious by being put into that polluted vehicle.

The Wilson administration was the first to hold regularly scheduled press conferences in an attempt to curry favor with the American public, according to the Pew Research Center. Leaks from the president’s cabinet, however, often undermined Wilson’s public image, leading the president to complain in a letter to Missouri Senator W. J. Stone on the eve of World War I: “I am so accustomed to having everything reported erroneously that I have almost come to the point of believing nothing that I see in the newspapers.”

The World War II-general-turned-commander-in-chief held the first televised presidential news conferences and built the White House TV studio. But at the 1964 Republican Convention, the by-then-former president also made history in publicly accusing the press of maintaining a liberal bias: “Let us particularly scorn the divisive efforts of those outside our family, including sensation-seeking columnists and commentators, because I assure you that these are people who couldn’t care less about the good of our party.” The move drew sharp backlash from, you guessed it, the press.

Perhaps no president’s distrust of the media is better documented than Nixon’s. His paranoia about unfair treatment by the press showed up even when evidence proved otherwise: When he lost the 1962 California governor’s race, he said that journalists must have been “delighted,” even though most of the state’s newspapers had endorsed him. His view of the press remained hostile after he ascended to the White House, and then took a nosedive after the New York Times and the Washington Post published the Pentagon Papers in 1971, despite his administration’s attempts to block their publication. In a phone call the following year with his National Security Advisor Henry Kissinger, Nixon was blunt: “Never forget, the press is the enemy. The establishment is the enemy. The professors are the enemy. Professors are the enemy. Write that on a blackboard 100 times and never forget it.”

While the 40th president would become known as “The Great Communicator,” he didn’t always get along with the media. Early in his tenure, in an interview with Barbara Walters, Reagan lamented the adversarial relationship between the press and the presidency (though he wold later affirm the necessity of that posture). The Gipper griped to Walters about press leaks he claimed were slowing his administrative agenda: “I thought I had gotten used to something of that kind in Sacramento, but I’ve never known any place like Washington that made me in frustration the other day say that I think the District of Columbia is one giant ear.”

Lest you believe that distrust of the media belongs exclusively to conservative politicians, there was no love lost between Clinton and the press by the end of his trying first year in office. He often felt attacked from the left, a grievance he aired in a 1993 Rolling Stone interview. “I have fought more damn battles here for more things than any president has in twenty years, with the possible exception of Reagan’s first budget, and not gotten one damn bit of credit from the knee-jerk liberal press, and I am sick and tired of it,” he said, “and you can put that in your damn article.” (They did.)

Before he was the 43rd president, candidate George W. Bush fell prey to a hot mic on the campaign trail. He was overheard telling running mate Dick Cheney that New York Times reporter Adam Clymer was at the event, before he called Clymer “a major league asshole.” Back then, there was outrage. Today, it’s just the type of language POTUS 45 typically reserves for protesting NFL athletes or certain African nations.