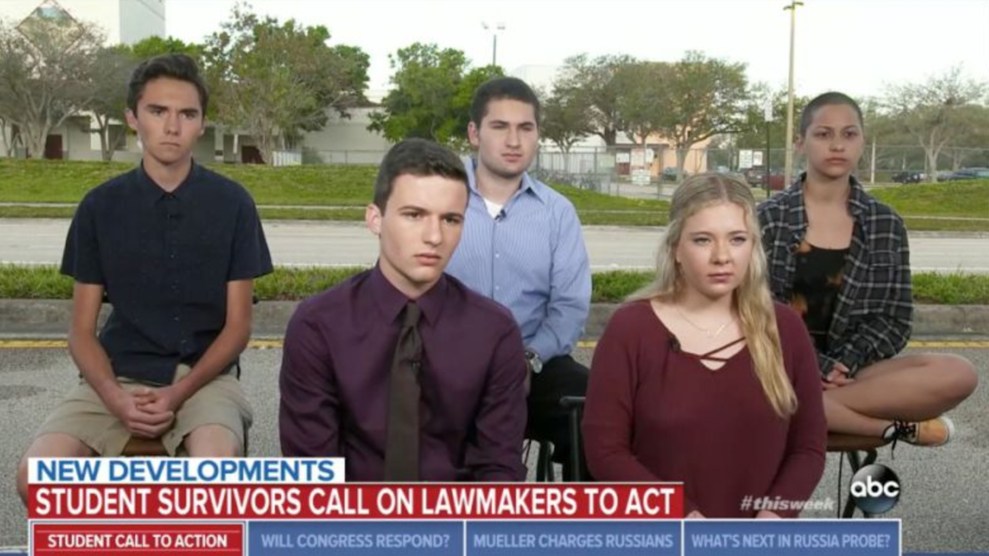 Five students from Marjory Stoneman Douglas High School in Parkland, Florida, made their way through all the major morning talks shows Sunday, appearing on NBC, ABC, CBS, Fox, and CNN. They announced nationwide marches for gun control next month and ripped politicians, including President Donald Trump, who benefit from the National Rifle Association’s political spending while refusing to act to strengthen gun laws.

“Now is the time to get on the right side of this,” Emma Gonzalez, one of the students, said on NBC’s Meet the Press. “Because this is not something we are going to be let [you] sweep under the carpet.” Gonzalez said she was speaking directly to Trump, Florida Gov. Rick Scott (R), Florida Sen. Marco Rubio (R), and other lawmakers who have benefited from pro-gun money.

“These people who are being funded by the NRA are not going to be allowed to remain in office when midterm elections roll around.”

“These people who are being funded by the NRA are not going to be allowed to remain in office when midterm elections roll around,” she said. “They are going to be voted out of office.”

Gonzalez, Cameron Kasky, David Hogg, Alex Wind, and Jaclyn Corin are among the survivors of the shooting that killed 17 people at the high school on Wednesday. They drew praise from network and cable news hosts as they offered pointed advice for lawmakers and older Americans.

On Sunday afternoon, the White House announced that Trump will hold what it called a listening session on gun violence with high school students this coming Wednesday. The White House did not say which students Trump would meet with or if he would speak with the students organizing the marches. Some Stoneman Douglas students and parents have said they don’t want to meet with Trump, the Daily Beast reported Friday.

“We are losing our lives while the adults are playing around,” Kasky said on CNN’s State of the Union.

The students said they are planning are series of demonstrations called “March for Our Lives” that will take place around the country on March 24. It will include a rally in Washington. Other students are planning a nationwide school walkout on April  20—the 19th anniversary of the school shooting at Columbine High School in Colorado—to highlight lawmakers’ failure to address the problem.

Other students from the school on Sunday criticized Trump for a tweet in which he blamed the the ongoing Russia probe for the FBI’s failure to act on warnings about the alleged gunman. Trump’s tweet drew widespread condemnation.