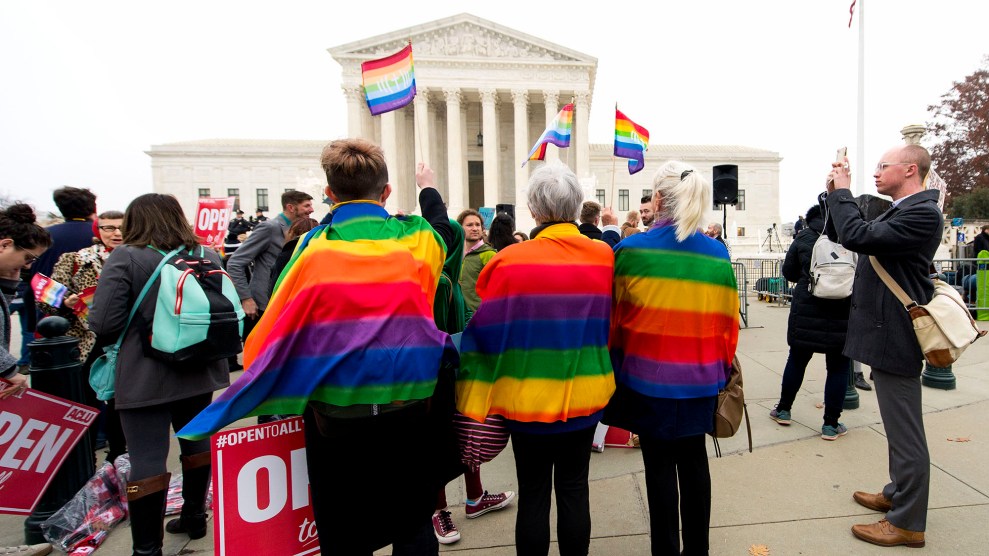 People demonstrate outside the United States Supreme Court on the morning of oral arguments in a major LGBT discrimination case in December 2017. Brian Cahn via ZUMA Wire

A federal appeals court on Monday ruled that the 1964 Civil Rights Act prohibits anti-gay discrimination in the workplace. The decision is a victory for LGBT rights and a blow to the Trump administration, which had argued that the seminal civil rights law does not protect against sexual orientation discrimination.

The Second Circuit Court of Appeals found that Title VII of the law, which prohibits workplace discrimination based on sex, applies to people targeted based on their sexual orientation. The case was filed in 2010 by Donald Zarda, a now-deceased skydiving instructor who sued his employer for firing him because he was gay.

“We now hold that sexual orientation discrimination constitutes a form of discrimination ‘because of… sex,’ in violation of Title VII,” the court’s ruling said, overturning past precedent to the contrary.

Though the federal government is not a party in the case, the Justice Department weighed in anyway last July. The government stated that it was interested in the case because the “United States is also subject to Title VII [the employment discrimination provision of the Civil Rights Act] in its capacity as the Nation’s largest employer.” In other words, the federal government wanted to reserve the right to discriminate against employees based on sexual orientation. The government’s position in the case was particularly awkward because it put the Justice Department at odds with another federal agency, the Equal Employment Opportunity Commission, which for years has argued that sexual orientation discrimination is sex discrimination and argued on behalf of Zarda.

The Zarda case is not the only time the Trump administration has inserted itself into cases over  LGBT rights. In December, the government argued in favor of a cake shop owner who refused to make a wedding cake for a same-sex couple. The Supreme Court has not yet decided that case. The department also rescinded Obama era policies protecting transgender students and workers.

Today’s ruling is the second federal appeals court decision to find that sex discrimination in the Civil Rights Act includes sexual orientation discrimination. Last April, the Seventh Circuit became the first appeals court to reach this conclusion in a ground-breaking opinion. Together, the two decisions build momentum for workplace protections for gays and lesbians. Federal circuit courts are currently split on this issue, and the Supreme Court, which has thus far resisted weighing in, may ultimately have to take it up.