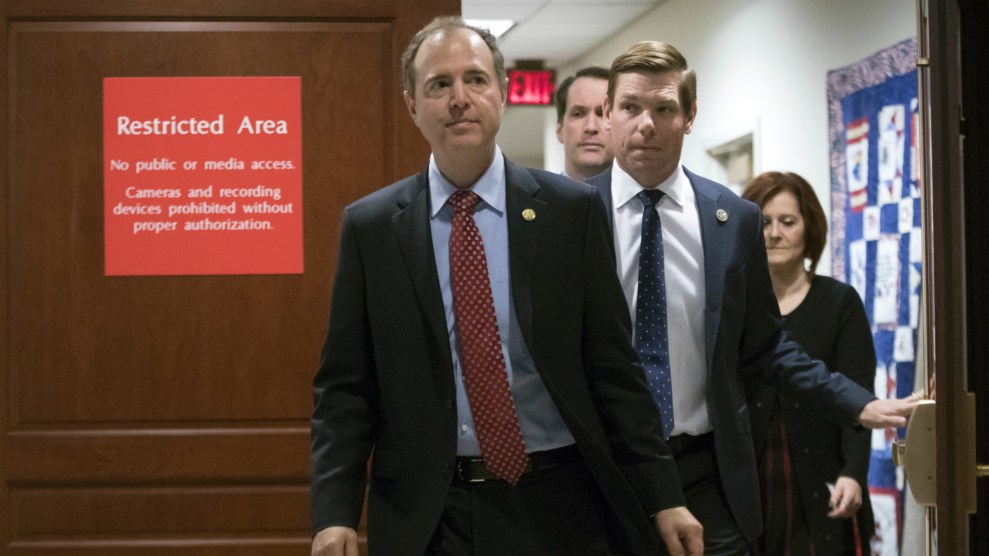 As part of the long-running saga over the Nunes memo—a major distraction in the Trump-Russia case—the House Intelligence Committee held a meeting on Monday to consider whether to release the counter-memo drafted by Democrats on the panel. The session was held privately but a transcript of the proceedings was released on Friday afternoon. It shows that Democrats argued that the release of their memo was necessary to correct misleading impressions of the Nunes memo, which was released last week and which claimed the FBI had inappropriately used the so-called Steele dossier to obtain a super-secret surveillance warrant for Carter Page, a former Trump campaign foreign policy adviser. While the Nunes memo has turned out to be essentially a big zero, the important moments at the meeting focused on a much more significant matter: what a lousy job the Republican-led committee is doing in its investigation of the Trump-Russia scandal.

For months, amid never-ending partisan wrangling, Democrats on the committee have groused that its Russia inquiry is being conducted in a slip-shod manner. But at the meeting, several Dems presented specific concerns that do raise serious questions about the fundamental legitimacy of this endeavor. They noted that the committee has refused to take basic investigative steps—most notably, subpoenaing records to determine if witnesses have been telling the truth.

At one point, Rep. Adam Schiff (D-Calif.), the top Democrat on the committee, referenced the testimony privately given to the committee by Michael Cohen, Donald Trump’s lawyer, to make his point:

He did testify, and, yes, we actually had the opportunity to ask him those questions. What we have not had the opportunity to do is determine whether he was telling us the truth, because we have made requests to get documents, the subpoenaed documents, and the majority has been unwilling to support those requests to subpoena documents. When that is the case, then we have no way of verifying or disproving information. Numerous requests to subpoena documents by the majority have been refused. In the case of Don [Trump] Jr., our subpoena requests; in the case of Deutsche Bank, our subpoena requests. Numerous times, we have asked for documents, we have requested to subpoena documents from Twitter when we know there were direct communication between Don Jr. and Twitter, and Roger Stone and Twitter. [Note, ed.: Schiff might have misspoken and meant to refer to communication that Trump Jr. and Stone had with WikiLeaks.] These requests have gone nowhere with the majority. So if you simply intend to rely on self-interested witnesses’ testimony, that is not much of an investigation.

That the Republicans are not doing the most elemental digging is a serious charge. In one instance, according to a committee source, Democratic members were reviewing phone records submitted by Trump Jr. related to the June 2016 Trump Tower meeting, during which he, Paul Manafort, and Jared Kushner met with a Russian emissary, believing she was bringing them secret dirt on Hillary Clinton. The phone records noted a call from a blocked number during a series of calls Trump Jr. had to set up this meeting. In testimony to the committee, Trump Jr. said that he could not remember that particular call. Democrats have asked for the committee to subpoena records to reveal the number. But committee Republicans have ignored the request.

During the meeting on the Democratic counter-memo, Rep. Joaquin Castro (D-Tex.) also criticized the handling of the Russia investigation:

I would like to echo the concerns that this has very much been a take-their-word-for-it investigation that has hardly scratched the surface of getting to the truth. At just about every interview that I have had a chance to ask a question, I have had asked these witnesses how many phone numbers they have had, how many emails they used, whether they used private messaging, things that would allow us to further investigate and determine what they are telling us is true. And as far as I know, as Mr. Schiff mentioned, we have barely scratched the surface. We have not followed up and subpoenaed any of those records. So how are we supposed to know that these folks are telling us the truth? I don’t think that we have gotten to the bottom of hardly any of this stuff. And I can only hope that the Senate investigation is being much more thorough and that Robert Mueller’s investigation is being more thorough.

The House Intelligence Community has been conducting most of its inquiry behind closed doors, holding no public hearings with the major witnesses. (The same goes for the Senate Intelligence Committee.) This means that the public has gotten only a few glimpses of what might be considered one of the most important tasks facing the current Congress: investigating Moscow’s attack on the 2016 election and any interactions between Trump associates and the regime of Vladimir Putin. Certainly, Republican partisans will be quick to discount the criticism from Democrats. But Rep. Devin Dunes (R-Calif.), the committee chairman, took no issue with the comments from Schiff and Castro, and he did not cite instances when the committee has subpoenaed records to ascertain the accuracy of witness testimony.

This transcript buttresses the case of Democrats who claim that Republicans are more fixated on mounting side-show inquiries designed to provide cover for Trump than probing the main elements of the scandal. At one point, Rep. Eric Swalwell (D-Calif.) vented the frustration of the Democratic side:

I don’t know what you would call it when a candidate asks for help from a foreign adversary….That foreign adversary goes out and gives that candidate help and then offers a number of meetings to senior foreign policy advisers, to the candidate’s son. The candidate’s data firm [Cambridge Analytica] is reaching out, asking for the same emails. You have the candidate’s lawyer [Michael Cohen] working with an individual connected to Russia [Felix Sater], who is saying: We can engineer this, if we can get Donald Trump and Vladimir Putin together over a business deal, we can engineer our boy being elected president. You have Roger Stone, an adviser and friend of the candidate, intimating that further [WikiLeaks] releases are coming. And then you have the post-election follow-up that Michael Flynn, who has pled guilty, had with the Russian ambassador. I don’t know what you would call that, but I would call it something worth at least looking into…and at least be willing to issue subpoenas so that it is not just take them at their word, because none of these people have shown that they are worthy of being taken at their word. They have lied about their prior contacts with Russia. George Papadopoulos I think is the canary in the coal mine. He was interviewed January 27, 2017, by FBI. He lied about his contacts over in London with the professor. He was interviewed again in February, and he lied. Only when the FBI showed the willingness to subpoena his Skype and Facebook logs did he come around six months later.

Ultimately, the Nunes memo and the Democratic counter-memo are not that important. But the tussle over them is, for this dust-up reveals how a congressional endeavor vital for national security has been turned into a partisan farce that is unlikely to provide the public with a full accounting of a brazen assault on American democracy.