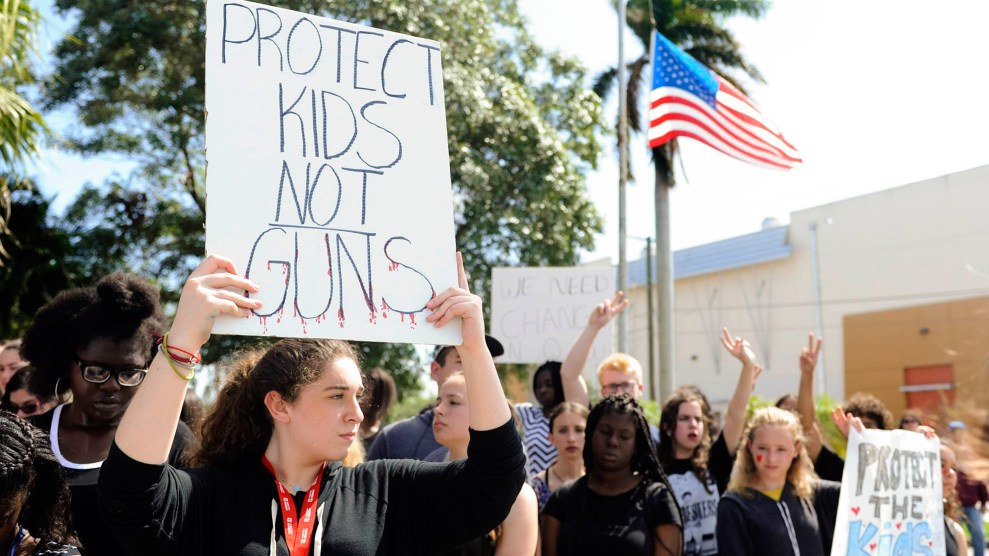 “In our movement, we wish for parents to make a promise to their children that they will vote for legislatures and politicians who will choose our children’s safety over guns!” reads the mission statement at the top of the Parents’ Promise to Kids website. Adam Buchwald and Zach Hibshman, the students behind the PPTK initiative, have asked adults to sign a contract that pledges to vote for candidates who “will act on common sense gun laws.”

The PPTK movement has begun! #PPTK #ParentsPromiseToKids #SafetyOverGuns
Parents: Sign our contract and take a picture with your children. Post to Twitter and use the following hashtags. Lets spread the movement and promise to the children!https://t.co/1vCAmTRB3k pic.twitter.com/5A4xZTVS8t

Lauren has promised to her children to vote for politicians who put child safety over guns! #SafetyOverGuns #PPTK #ParentsPromiseToKids pic.twitter.com/1llVLxOjo1

PPTK is the latest example of student-led activism in response to a mass shooting at Marjory Stoneman Douglas High School that left 17 dead and more than a dozen wounded on Valentine’s Day. Just days after the shooting, students rallied outside a federal courthouse to demand action against gun violence. The rally culminated in a memorable speech from Emma Gonzalez, a senior at the high school who survived the shooting. “To every politician who is taking money from the NRA: Shame on you,” she said.

Teenagers have taken to social media and written op-eds. They’ve bused to Tallahassee to meet lawmakers, including Florida’s Gov. Rick Scott, to lobby for gun control. At a recent CNN town hall, students and parents pressed Sen. Marco Rubio and other politicians, NRA spokesperson Dana Loesch, and Broward County Sheriff Scott Israel on what they plan to do to address gun violence in the shooting’s aftermath. They’ve even pressured corporations who have sponsorship deals with the NRA to cut ties, resulting in the end of discount programs for NRA members at companies like Delta Airlines and Hertz rental cars.

The Stoneman Douglas students, who have dubbed their movement, “Never Again,” have inspired similar demonstrations from students across the country. Next month, the group is taking its action to Washington, DC, for what they’ve called “March for Our Lives,” an event in which they’ve drawn financial support from the likes of George and Amal Clooney and Oprah.