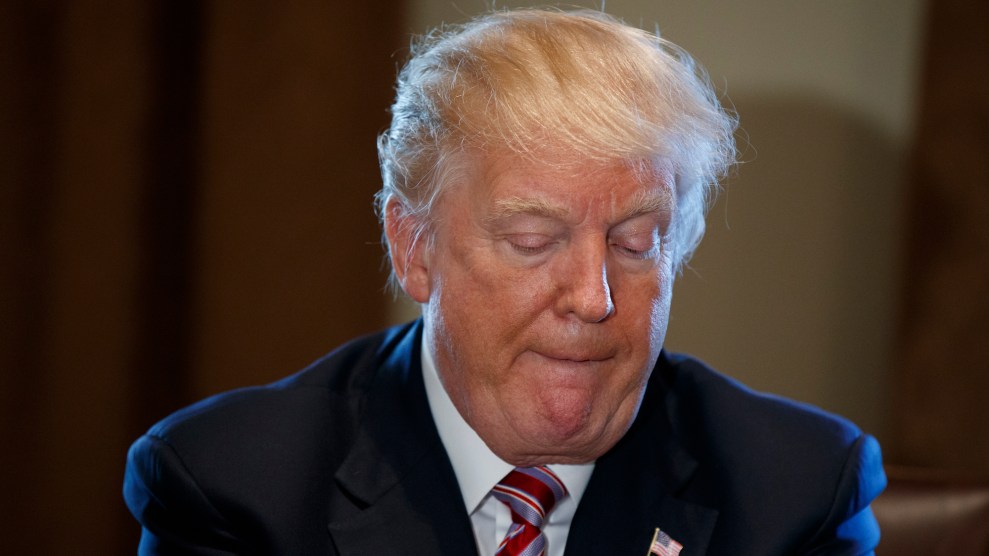 President Donald Trump listens during a meeting with lawmakers about trade policy in the Cabinet Room of the White House, Tuesday, Feb. 13, 2018.Evan Vucci/AP

People forgot. Special counsel Robert Mueller was not only focused on investigating interactions between Trump world and the Russians; he was tasked with digging into Vladimir Putin’s attack on the 2016 election. And on Friday afternoon, he announced the indictment of 13 Russian nationals for interfering with the presidential campaign. The indictment focused on the Internet Research Agency, a Kremlin-linked outfit based in St. Petersburg, where hundreds of trolls were paid to disseminate false information and propaganda on American social media to influence the election. The document noted that IRA trolls “posted derogatory information about a number of candidates” and its “operations included supporting the presidential campaign of then-candidate Donald J. Trump…and disparaging Clinton.”

Here is yet more proof, not that any was needed, that Russia meddled in the election to benefit Trump—and that Trump’s continued denial or downplaying of Putin’s intervention is nothing but bunk. The indictment is a reminder that Trump won a tainted election, in which he was assisted by Russian skullduggery—and that he has refused to come to terms with that.

This indictment only covers one part of the information warfare unleashed by Russia against American democracy two years ago. Roughly speaking, Moscow’s attack had three components: the social media assault, the hack-and-dump operation targeting Democrats, and the penetration of state voting systems. Each had the potential to undermine the election and cause discord or even chaos. The social media attack went largely unnoticed during the campaign, as Russian trolls and bots infiltrated Facebook, Twitter, Instagram, YouTube, and other platforms to spread and amplify messages designed to fuel political divisions within the United States and, in many instances, to boost Trump. They bought ads on Facebook that assailed Clinton. They set up fake Facebook pages that organized and promoted real-life pro-Trump or anti-Clinton rallies in the United States. Facebook and Twitter only grudgingly acknowledged last year that they had been exploited by Russia’s cyber operatives, whose work complemented the social media efforts of the Trump campaign. And the Internet Research Agency, the target of Mueller’s indictment, was a center of this clandestine online activity.

The other two cyber battlefronts were recognized during the campaign. Hackers associated with Russian intelligence agencies swiped emails and documents from Democrats—most notably, the Democratic National Committee, the Democratic Congressional Campaign Committee, and John Podesta, the CEO of Hillary Clinton’s campaign—and the material was released via WikiLeaks and other websites. This operation, the US intelligence community concluded, was mounted by Moscow and designed to foment disorder and to help Trump. At the same time, Russia-connected hackers in the summer of 2016 probed the election systems of many states, in limited cases swiping data. This action was detected, and US officials became concerned that Moscow might try to screw with the voting or tallying process on Election Day. The concern was not so much that Russia would alter results to help Trump or any other favored candidate but that Putin’s spooks would cause problems—say, messing with voter registration data bases—that would prompt questions about the accuracy of the vote count and trigger political upheaval no matter which candidate won. This was deemed such a serious worry that President Barack Obama directly told Putin to knock it off.

Committing cyber fraud, hacking into computer systems, disseminating stolen material, breaching state voter databases—all of this is illegal, whether or not done by a foreign adversary. And these crimes fall within the purview of the FBI, which certainly was investigating these acts before Mueller was appointed special counsel last May after Trump fired FBI Director James Comey.

The Russia-centered portion of the FBI’s investigation has always been overlooked within the media coverage of Mueller’s probe. Most attention was devoted to the inquiry’s examination of interactions between Trump associates and Russians. That was an important question: Did anyone within Trump’s circle improperly deal with Russians while Moscow was waging this three-front information attack on the United States? But it was just as significant to investigate precisely what Putin got away with and to hold his regime accountable—a matter in which Trump himself has displayed absolutely no interest. (This week, Trump’s own spy chiefs stated that Russia would once again try to intervene in the coming midterm elections.)

Mueller’s investigation and news reports have already undermined Trump’s stance regarding the Russian attack. The special counsel has officially confirmed that the Trump campaign was in contact with Russians while Moscow was assaulting the election. And the Trump campaign’s effort to obtain “dirt” on Clinton from a Moscow emissary has been well documented. Now Mueller has declared that he has proof of Moscow’s covert social media campaign, and the indictment indicates this part of Moscow’s attack extended beyond what has already been reported and included secret operations conducted by Russians who were in the United States. The indictment also prompts the assumption that Mueller has been scrutinizing the Russian hack-and-dump activity and the election-system penetrations, which could well produce further indictments.

This means that Mueller’s probe could yield additional information regarding the details and breadth of the Russian campaign to intervene in the election to assist Trump. The president, who has yet to say anything in public showing he is committed to preventing Russian meddling in this year’s election, can continue to dismiss such material as “fake news” produced by a “witch hunt.” (According to the Washington Post, in his first year as president, Trump said the Russia probe was a Democratic hoax 44 times.) Hours after Friday’s indictment, Trump issued a statement once again dismissing the Russia investigation for producing “outlandish partisan attacks, wild and false allegations, and far-fetched theories.”  But with this indictment—and possibly others—Mueller has demonstrated that Trump, by refusing to acknowledge fully the Russian assault of 2016, has been helping Putin cover up a crime.