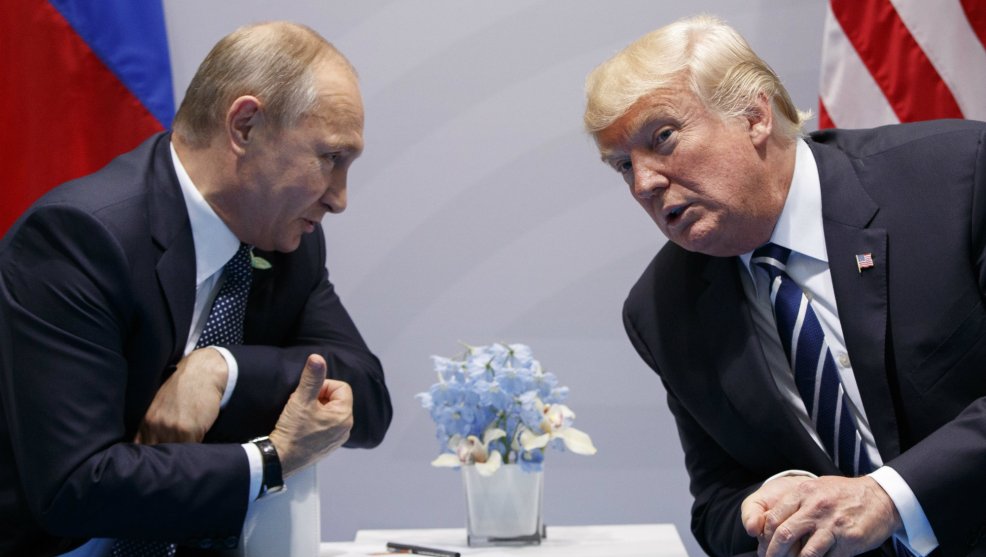 The top Democrat on the House intelligence committee brushed off attacks by President Donald Trump on Sunday, and he mocked Trump for claiming that Special Counsel Robert Mueller’s recent indictment of 13 Russians for meddling in the 2016 election somehow absolves Trump.

“This is a president who claims vindication anytime someone sneezes,” said Rep. Adam Schiff (Calif.) on CNN’s State of the Union.

During a string of provocative tweets over the weekend, Trump noted that the Friday indictment states that the Russian defendants began their efforts to interfere in the 2016 campaign back in 2014—a year before Trump formally announced his bid for the White House. Trump suggested that finding undermines the idea that the Russians aimed to help him prevail over Hillary Clinton in the election.

“The Fake News Media doesn’t want to say that the Russian group was formed in 2014, long before my run for President,” Trump tweeted. “Maybe they knew I was going to run even though I didn’t know!” Trump has also suggested the indictment proves that no one involved with his campaign colluded with the Russia efforts.

But Schiff and other Democrats noted the indictment does not actually absolve of the Trump campaign of colluding with Russia. It says unnamed Americans unwittingly assisted the Russian effort, but it does not address whether Trump campaign officials or others cooperated with other Russian efforts to interfere in the election. The indictment says that while the Russians began their scheme in 2014 with the goal of undermining the American democratic system, they eventually shifted their focus to trying to help elect Trump.

Former Director of National Intelligence James Clapper, speaking earlier on CNN, noted that US intelligence agencies believe the Russian government’s influence operations had multiple goals, including creating political discord in the United States and hurting the presidential campaign of Clinton, who Russian President Vladimir Putin considers an enemy. Russia’s support for Trump resulted from those prior goals, Clapper said.

Schiff argued Sunday that the indictment of the 13 Russians contradicts Trump’s past efforts to cast doubt on whether Russian interference in the election was significant.“It ought to put to rest for anyone, including the president, who continues to call this a witch hunt, that the evidence is now overwhelming and unequivocal, and we need to move to protect ourselves from Russian interference in elections that are coming up,” Schiff said.

Trump earlier on Sunday cited Schiff in multiple tweets, playing up the California Democrats’ statement Friday that President Barack Obama did too little to stop Russia’s interference the 2016 election. Trump tweeted Sunday that Schiff is “finally right about something. Obama was President, knew of the threat, and did nothing.”

Finally, Liddle’ Adam Schiff, the leakin’ monster of no control, is now blaming the Obama Administration for Russian meddling in the 2016 Election. He is finally right about something. Obama was President, knew of the threat, and did nothing. Thank you Adam!

But regardless of what Obama did or didn’t do, Trump actually encouraged Russia to hack Hillary Clinton’s emails in 2016. “Russia, if you’re listening, I hope you’re able to find the 30,000 emails that are missing,” Trump famously said on July 27, 2016. His remark came shortly after Republicans altered their 2016 platform to make a plank related to Ukraine more favorable to Russia. Trump later insisted his comment was a joke.

Schiff and other officials noted Sunday that Friday’s indictment does not rule out the possibility that Mueller will charge Trump or his supporters with taking steps to collude with Russia. Friday’s indictment charges the Russians with taking part in a conspiracy to defraud the United States. Americans, including Trump campaign officials, could be charged under the same broad statute.

Clapper, who had access to extensive US intelligence on the Russian effort, told CNN Sunday he expects “other shoes to drop” in the wake of Friday’s news. Clapper said Mueller may target people in the Russian government who oversaw their influence operation and may turn to other aspects of Trump’s own Russia ties. “Another thing that we haven’t seen much of” in public documents filed by Mueller’s team, Clapper said, “is financial entanglements between the Trump Organization [and Russia]—before the election and then during it.”