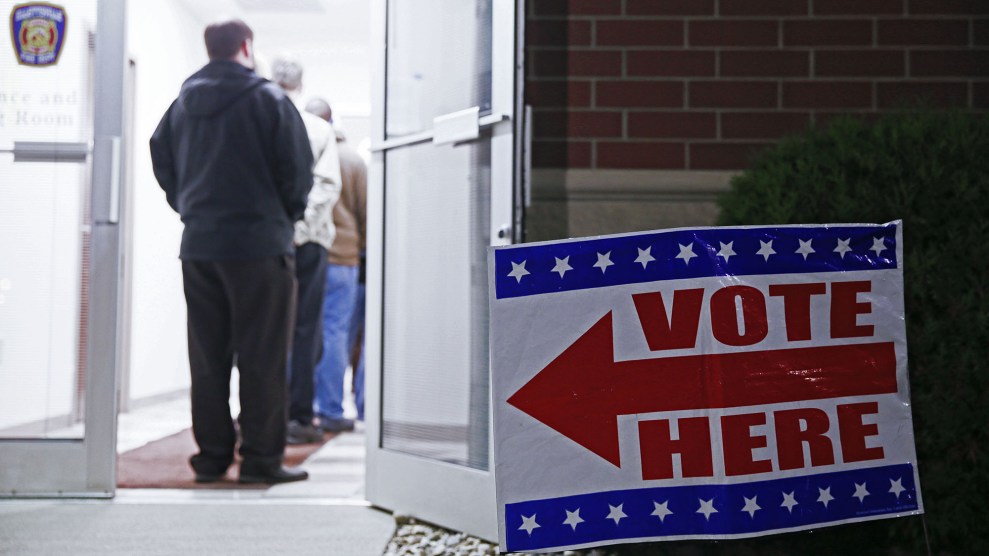 Voters at a polling place in Ellettsville, Indiana, on November 8, 2016. Stringer/Sputnik via AP

Russian nationals tried to suppress minority turnout in the 2016 election and spread false claims about voter fraud in an effort to harm Hillary Clinton’s presidential campaign and help Donald Trump, according to an indictment announced today by the Justice Department.

The indictment says that a St. Petersburg-based company called Internet Research Agency LLC began in the second half of 2016 to “encourage U.S. minority groups not to vote in the 2016 U.S. presidential election or to vote for a third-party U.S. presidential candidate.”

a. On or about October 16, 2016, Defendants and their co-conspirators used the Instagram account “Woke Blacks” to post the following message: “[A] particular hype and hatred for Trump is misleading the people and forcing Blacks to vote Killary. We cannot resort to the lesser of two devils. Then we’d surely be better off without voting AT ALL.”

b. On or about November 3, 2016, Defendants and their co-conspirators purchased an advertisement to promote a post on the Instagram account “Blacktivist” that read in part: “Choose peace and vote for Jill Stein. Trust me, it’s not a wasted vote.”

c. By in or around early November 2016, Defendants and their co-conspirators used the “United Muslims of America” social media accounts to post anti-vote messages such as: “American Muslims [are] boycotting elections today, most of the American Muslim voters refuse to vote for Hillary Clinton because she wants to continue the war on Muslims in the middle east and voted yes for invading Iraq.”

The Russians also pushed debunked claims about voter fraud, including that Clinton stole the Iowa caucus and received thousands of ineligible votes in Florida. From the indictment:

a. On or about August 4, 2016, Defendants and their co-conspirators began purchasing advertisements that promoted a post on the Facebook account “Stop A.I.” The post alleged that “Hillary Clinton has already committed voter fraud during the Democrat Iowa Caucus.”

b. On or about August 11, 2016, Defendants and their co-conspirators posted that allegations of voter fraud were being investigated in North Carolina on the Twitter account @TEN_GOP.

c. On or about November 2, 2016, Defendants and their co-conspirators used the same account to post allegations of “#VoterFraud by counting tens of thousands of ineligible mail in Hillary votes being reported in Broward County, Florida.”

Republicans used many of these same tactics during the presidential campaign, with Trump repeatedly warning of mass voter fraud and Republican-controlled states like Wisconsin passing restrictive voting laws that disproportionately kept minority voters from the polls, as Mother Jones has reported. The Department of Homeland Security has already stated that the Russians tried to probe voter registration lists in 21 states during the 2016 campaign and breached voter registration lists in Illinois and Arizona, though they were unsuccessful in changing any votes, according to DHS.

The indictment includes a list of ads the defendants purchased on social media networks, several of which aimed to discourage minorities from voting for Clinton or to spread voter fraud fears: