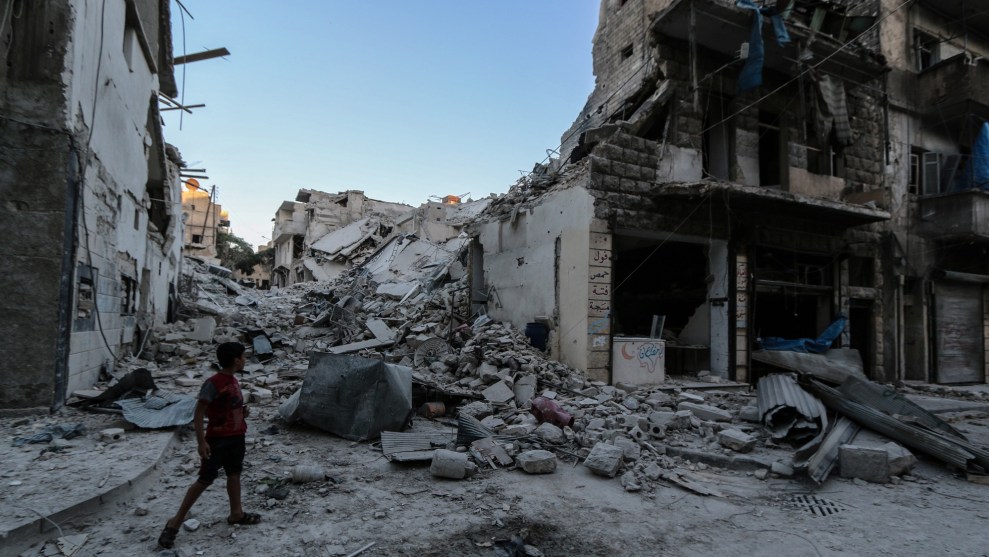 The Trump administration will spare about 7,000 Syrians living in the United States from deportation for at least 18 months. But in a break from the Obama administration, the Department of Homeland Security announced on Wednesday that it has decided that Syrians who have arrived since 2016 will not be eligible for protected status.

Temporary Protected Status (TPS) is granted to people in the United States from designated countries that are facing extraordinary circumstances such as ongoing armed conflict. The decision to extend TPS for Syrians allows them to work legally in the United States until September 2019, unless the administration decides to extend their status again. DHS Secretary Kirstjen Nielsen said in a statement that it “is clear that the conditions upon which Syria’s designation was based continue to exist.”

The Obama administration first granted Syrians protected status in 2012 and extended their status three times. People are eligible for TPS only if they arrived in the United States before a designated date, but each time the Obama administration granted an extension, it also moved up that date to the present, so that all Syrians already in the country were eligible. Its most recent extension was in August 2016. But now DHS is declining to move up the cutoff date, so all Syrians who have come to the United States since August 2016 will not qualify for protections from deportation. The Guardian estimates that 2,000 Syrians could be affected by the cutoff.

Robert Ford, the US ambassador to Syria from 2011 to 2014, told reporters that he doesn’t understand the Trump administration’s thinking in declining to update the eligibility date. “The Syrian conflict is not finished,” Ford said. “There is still heavy fighting.” Ford added that men deported to Syria would face mandatory conscription, as well “deep suspicion” from the Syrian regime.

The State Department warns Americans not to travel to Syria due to “terrorism, civil unrest, and armed conflict.” It urges travelers who ignore this advisory to draft a will. In January, Secretary of State Rex Tillerson described Syria as a “humanitarian catastrophe,” noting that up to 500,000 Syrians have died and more than 5 million have become refugees since 2011. (The United States has accepted two Syrian refugees since late October, compared to more than 3,700 during the same period last year.)

Royce Murray, the policy director at the American Immigration Council, an immigrant advocacy group, said that with the conditions in Syria “not in dispute, there is no basis for making any such distinction to leave some Syrians with protections and others without.”

Amr Sinan, a 34 year-old Syrian TPS holder who manages a team of software engineers in Boston, called the Trump administration’s decision “relatively good,” particularly because fewer Syrians have come to the United States as a result of Trump’s travel ban, so not that many will be affected by the cutoff date. After work, Sinan is pursuing a master’s degree in technological entrepreneurship at Northeastern University. He said Americans have been welcoming but often surprised to learn where he’s from. “The media doesn’t talk about good Muslims or good Syrians,” he said.

Monzer Shakally, a Syrian TPS holder and a senior at the University of Iowa, also saw the announcement as a positive development. He doesn’t know if he’ll be permitted to renew his TPS status after next year, but he said, “I’ll worry about it then.” Like Sinan, he fears that returning to Syria would be a “death sentence.”

In the last fiscal year, only two Syrians were deported by US Immigration and Customs Enforcement. Ford, who is now a senior fellow at the Middle East Institute, a Washington think tank, said deporting Syrians would pose a number of logistical challenges since there are no direct flights between the United States and Syria, and the United States has suspended diplomatic operations in Syria.

The decision to keep temporary protections for Syrians departs from the administration’s recent TPS announcements. In January, DHS said that about 200,000 Salvadoran TPS holders will have until September 2019 to leave the country or find another path to legal residency. If they don’t, they are subject to possible deportation after living in the country since at least 2001.

Last year, the administration said it is ending protected status for more than 50,000 people from Haiti, Nicaragua, and Sudan. In the coming months, DHS will decide whether to extend TPS protections that 57,000 Hondurans have had since 1999.

Despite the extension for him, Sinan doesn’t see why all Syrians in the United States won’t be eligible for TPS. “The war is still there,” he said. “There [are] people dying right now. There are missiles there. There are explosions all over Syria…So I don’t think it makes sense at all.”