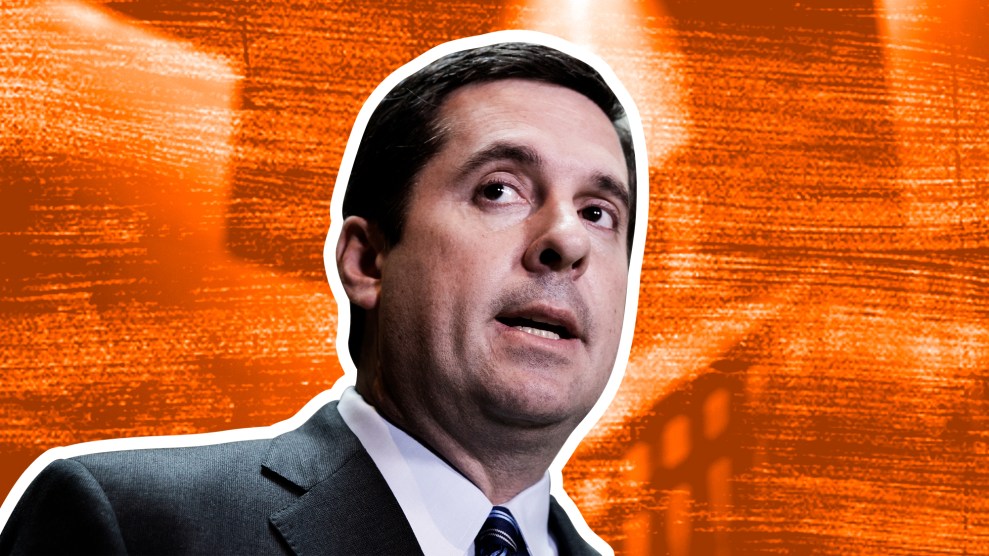 After days of much frothing, Rep. Devin Nunes (R-Calif.) and his fellow Republicans on the House Intelligence Committee—with an assist from President Donald Trump—finally on Friday released the memo: a document cooked up by the panel’s Republican staff that claims the infamous Steele dossier was inappropriately used by the FBI and the Justice Department to obtain a super-secret FISA surveillance warrant on Carter Page, a foreign policy adviser to the Trump campaign. The Nunes memo does have a few details that had not yet been revealed (including those related to one of the authors of this article), but the big point is this: nothing in this memo undercuts the initial basis for the FBI’s Trump-Russia investigation. In fact, the memo makes clear that the Steele dossier was not what led to the bureau’s probe. The fuss is just about one slice of the inquiry—not the heart of the matter.

Most of the three-and-a-half-page memo is devoted to the contention that the Page FISA warrant application was based on the Steele memos, which were paid for by partisans—namely, the Hillary Clinton campaign and the Democratic National Committee—and that the federal court that reviewed the application was not told of this. The suggestion here is that the warrant was obtained somewhat under false pretenses. Yet there is no way of knowing if this is an accurate depiction of events. Democrats on the House Intelligence Committee and the FBI have each said the memo is inaccurate—but have not addressed the specific details. Republicans on the committee so far have refused to allow a counter-memo written by Democrats to be released to the public. But after the Nunes memo came out, Rep. Adam Schiff (D-Calif.), the top Democrat on the committee, asserted it was “misleading” to say the FISA court was unaware of the political connections to Steele’s reports. “The Republican document mischaracterizes highly sensitive classified information that few Members of Congress have seen, and which Chairman Nunes himself chose not to review,” Schiff said in a statement. But even if any significant part of the account in the Nunes memo is correct, it only reflects on this warrant, not the full investigation.

For months, some Trump partisans have claimed that the Steele memo kicked off the FBI’s inquiry and that this meant the probe was permanently poisoned. Yet this memo shows otherwise. In its final paragraph, the Nunes memo addresses what started the probe—and it wasn’t the Page warrant. It was a drunken admission by George Papadopoulos, another Trump campaign foreign policy adviser, who in May 2016 told an Australian diplomat in London that he knew that Moscow had “dirt” on Hillary Clinton. (This was before it was publicly known that the Russians had hacked Democratic targets.) “The Papadopoulos information triggered the opening of an FBI counterintelligence investigation in late July 2016 by FBI agent Pete Strzok,” the memo states. And this was months before the FBI sought the surveillance warrant for Page. (Several years earlier, Page was the target of a Russian intelligence recruitment effort in an operation uncovered by the FBI. There was no public indication of any wrongdoing on Page’s part, but this certainly placed him on the bureau’s radar. And in July 2016, while he was a Trump campaign adviser, Page traveled to Moscow to deliver a lecture and met with Russian officials.)

There is other (possibly) intriguing information in the memo. But if the goal here is to delegitimize the full FBI investigation, the memo is a swing-and-a-miss.

The memo claims that the original Page warrant application cited a Yahoo News story by Michael Isikoff, who had spoken to Steele and suggests the FBI misused this article to corroborate information in the application. The memo also notes that the FBI cut its ties to Steele after Mother Jones posted a story on October 31, 2016, quoting Steele but not by name. (Interest declared: Corn and Isikoff are co-writing a book on the Russian hacking of the 2016 election.)

The memo makes a big deal of the fact that Steele was aghast at the idea of Trump becoming president—in order to discredit Steele to discredit the Page warrant to discredit the investigation. But it is no surprise that a former counterintelligence official would have been concerned by the accounts he picked up of interactions between the Trump campaign and Russians. Indeed, Steele believed the GOP nominee had been compromised by the Kremlin. The Mother Jones’ story quoted him saying, “This is something of huge significance, way above party politics. I think [Trump’s] own party should be aware of this stuff as well.” Clearly, Steele was no fan of Trump. This is not news. Moreover, the FBI often uses information from biased sources. In this case, the bureau had worked previously with Steele and considered him credible.

The Nunes memo acknowledges that the Page warrant was repeatedly renewed—which means the FBI had to tell the court that it had obtained sufficient information to justify continuing the surveillance. This is an indication that the FBI collected material related to Page that went beyond anything in Steele’s memos. Taking aim at the FBI and Justice Department, though, the document alleges that there was a “troubling breakdown” in the FISA process. But this allegation cannot be evaluated without more information—and Nunes has blocked the Democrats from releasing more information.

At the end of this kerfuffle, it is hard to tell what wrongdoing, if any, was committed. And the source of the memo—Nunes—is hardly reliable. For nearly a year, he has tried to provide cover for Trump and undercut the investigation. (Remember when he ginned up the “unmasking” controversy that wasn’t?) Throughout this stretch, Nunes and his colleagues have devoted more passion to side issues than to the larger subject of Russian intervention in US politics and the interactions between Trump’s circle and Russia.

Shortly before the memo was released, Trump was asked about the document, and he replied, “A lot of people should be ashamed, and much worse than that.” And did he have confidence in Deputy Attorney General Rod Rosenstein, who signed off on at least one of the renewals of the Page warrant? With a grin, Trump said, “You figure that one out.” Clearly, he and his allies want to use the memo as a battering ram against the Trump-Russia investigation, which Rosenstein oversees. Will this work? At least in the past few weeks, they have been able to change the subject.