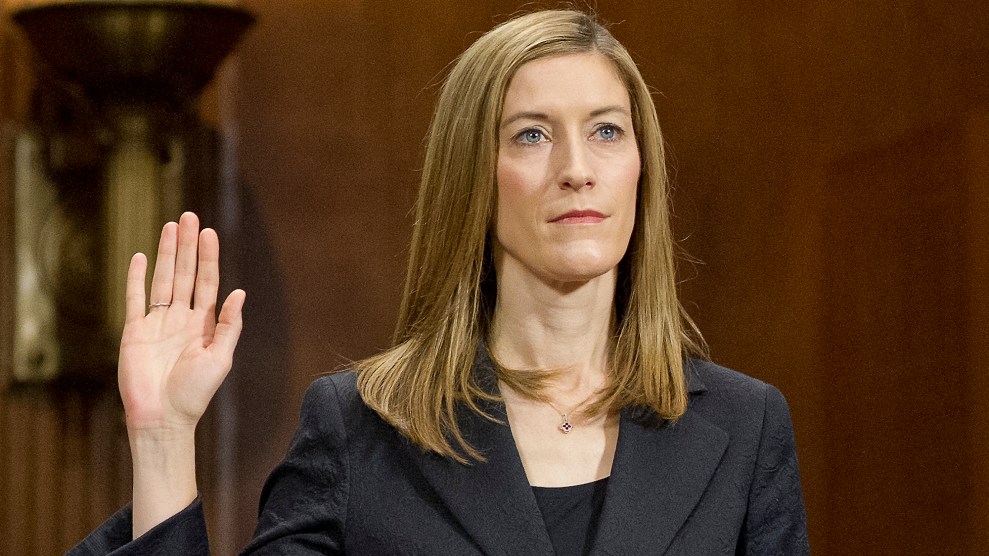 Rachel Brand is sworn-in during her confirmation hearing before the Senate Judiciary Committee in March 2017. Ron Sachs/picture-alliance/dpa/AP Images

The third-highest ranking official at the Justice Department, Associate Attorney General Rachel Brand, will step down after just nine months on the job, the New York Times reported Friday. Her departure could impact the future of the Russia investigation overseen by Special Counsel Robert Mueller.

Right now, the Mueller investigation is overseen by Deputy Attorney General Rod Rosenstein. But Brand was next in line to take over if Rosenstein recused himself, or was removed and not immediately replaced.

Brand is a staunch conservative, and close watchers of the Justice Department wondered whether she would resist efforts by the White House or Congressional Republicans to stymie the investigation, or follow orders, if given, to fire Mueller.

Who the administration makes acting Associate AG is a critical thing to watch. If Rosenstein has to recuse (and I don’t get how he hasn’t yet), that person is suddenly Mueller’s boss.

A 2016 Justice Department memo outlines the order of succession in overseeing the investigation if Rosenstein is recused or removed before Brand is replaced, according to Buzzfeed. That memo states that the person next in line is Solicitor General Noel Francisco.

Such an event would echo one of the major events in the Watergate Scandal. Back in 1973, during President Nixon’s famous Saturday Night Massacre, it fell to the solicitor general, Robert Bork, to fire the Special Prosecutor Archibald Cox, who was investigating the Watergate scandal. After the attorney general and his deputy resigned rather than fire Cox, Bork became attorney general and fired him.

A spokeswoman for the Justice Department, Sarah Isgur Flores, confirmed to Mother Jones that the solicitor general is next in line. “If there isn’t a senate confirmed Associate AG, the SG is next in line for the order of succession,” she said.

This story has been updated to include the response from the Justice Department.