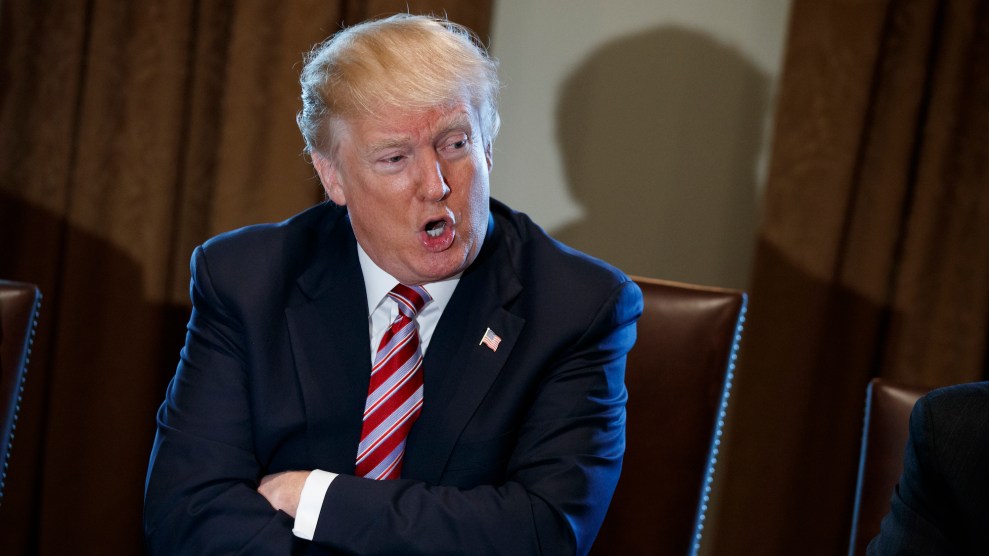 The Trump administration is sticking with its unusual definition of compromise: our plan or nothing.

On Wednesday, a bipartisan group of 16 senators introduced a plan to fund President Donald Trump’s border wall in exchange for providing a path to citizenship for Dreamers—young undocumented immigrants who came to the United States as children. In a vitriolic statement released just before 1 a.m. on Thursday morning, the Department of Homeland Security called it an “egregious” plan that would turn the country into a “Sanctuary Nation.”

Later on Thursday, the White House released a statement threatening to veto the bill because it would “drastically change our national immigration policy for the worse by weakening border security and undercutting existing immigration law.”

The Senate proposal was introduced by Mike Rounds (R-S.D.) and Angus King (I-Maine), along with seven additional Republicans and seven Democrats. It is the first proposal released during this week’s immigration debate that has a chance of passing the Senate, though it faces tough odds of getting the 60 votes needed to overcome a filibuster.

The Rounds-King plan focuses on providing a path to citizenship for more than a million Dreamers eligible for deportation protections under Deferred Action for Childhood Arrivals (DACA), which Trump moved to end last year. And where DACA required Dreamers to have entered the country before their 16th birthday, the Rounds-King measure would allow additional Dreamers who arrived before they turned 18 to become citizens. But Dreamers could not help obtain green cards for parents who “knowingly” brought them to the United States illegally.

In return, Trump would get the $25 billion in border security funding he is requesting. And like Trump’s proposed immigration framework, the Rounds-King plan would reduce legal immigration, albeit by a much smaller amount. Permanent residents would be blocked from sponsoring adult children for green cards that provide a path to citizenship. That could reduce legal immigration by about 27,000 people per year, according to the libertarian Cato Institute.

Cato estimates that Trump’s preferred immigration policies would cut legal immigration by nearly 500,000 people per year, or more than 40 percent. Trump’s proposal rests on four “pillars”: erecting a border wall, providing a path to citizenship for some Dreamers, and two provisions that would reduce legal immigration. One would end the diversity lottery for people from countries with low immigration rates to the United States. The other would block immigrants already in the country from sponsoring adult children, spouses, and parents who want to join them.

The Rounds-King plan directs DHS to prioritize deporting people with criminal convictions, as well as those who arrive in the United States after June 30, 2018. DHS said that by limiting the department’s ability to determine who it deports, the plan would mean “the end of immigration enforcement in America.” The department complained that the plan “eviscerates” its authority to “remove the vast majority of aliens illegally in the country.” DHS has repeatedly said that it already prioritizes deporting immigrants with criminal records. But noncriminal immigration arrests more than doubled in the last fiscal year. In its statement, the White House said that “preventing enforcement with respect to people who entered our country illegally before a date that is in the future would produce a flood of new illegal immigration in the coming months.”

The reaction from immigrant advocates has been mixed. FWD.us, an advocacy group affiliated with Facebook founder Mark Zuckerberg, endorsed the Rounds-King plan. Make the Road New York, a community group that has advocated for Dreamers, called it a “mass deportation bill” that exploits a crisis Trump manufactured. United We Dream, the most prominent Dreamer advocacy group, has not published a statement.

The bipartisan plan has a much narrower focus than the nearly 600-page Secure and Succeed Act introduced by Sen. Chuck Grassley (R-Iowa) this week. Grassley’s plan, which has the backing of Majority Leader Mitch McConnell but lacks the bipartisan support needed to overcome a filibuster in the Senate, would provide a path to citizenship for a smaller population of Dreamers, eliminate the diversity visa lottery and additional forms of family-based immigration, and make it easier to detain immigrants.

Trump strongly endorsed Grassley’s plan on Wednesday and vowed to oppose any legislation that doesn’t implement his four pillars. A White House official insisted on a call with reporters on Wednesday that Trump’s proposal is already a compromise because the administration has made a major concession by backing a path to citizenship for Dreamers. But Trump has long said he wants to find a way to keep Dreamers in the country. In September, Trump tweeted, “Does anybody really want to throw out good, educated and accomplished young people who have jobs, some serving in the military?”

This story has been updated to include the statement from the White House.