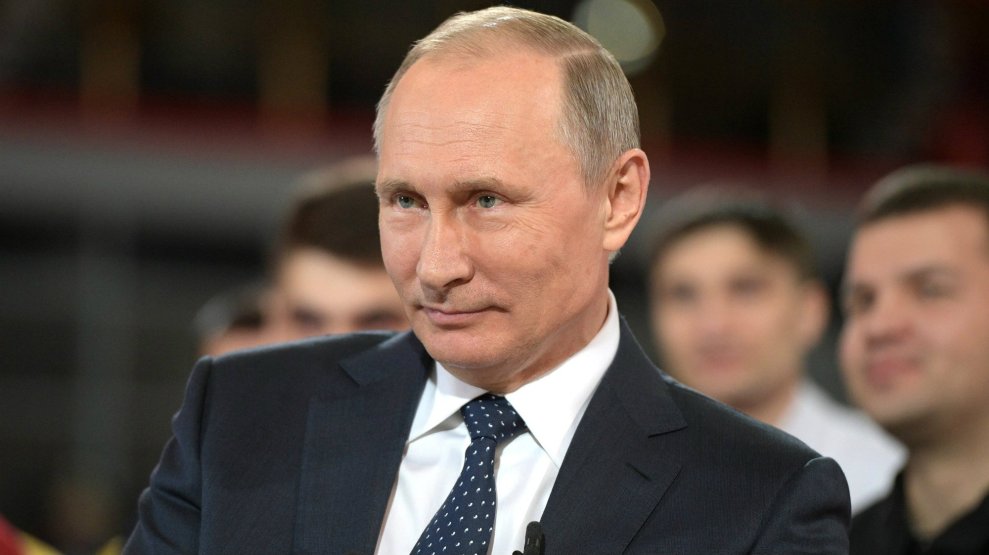 It is working—the Trump-GOP campaign to distract attention from the Russia scandal. And this is placing the nation—literally and seriously—at risk.

For the past week or so, the big kerfuffle dominating the news related to Russia has been over the memo—a classified memorandum drafted by the Republican staffers of the House Intelligence Committee that claims the FBI inappropriately used the now infamous Steele dossier in an application for a super-secret warrant authorizing surveillance of a Trump campaign foreign policy adviser named Carter Page. Donald Trump and his champions—including Rep. Devin Nunes (R-Calif.), the chair of the committee, and the other Republicans on the panel—want this memo publicly released, presumably because they believe it would undermine the FBI’s Russia investigation. Democrats on the committee contend that the memo cherry-picks facts and is misleading. The FBI and the Justice Department oppose its release, noting that such a disclosure would reveal important national security secrets. Others have noted that this is all a red herring; even if there was something fishy about this one warrant application—and there’s no telling if there was—that would have no bearing on the rest of the FBI’s investigation of Moscow meddling in the 2016 election and interactions between Trump associates and Russians.

Not only do the memo shenanigans deflect attention from the intelligence committee’s main job—probing the scandal; they also keep the spotlight from shining on a profound national security concern: the continuing threat from Russia.

But look at what just happened. I spent the opening of this article explaining this dust-up, rather than far more important recent developments related to the Russia scandal. And that’s the point. The Trump White House wants the politerati worked up over this sideshow. Consider these two other occurrences from this week. On Monday, Trump’s CIA chief, Mike Pompeo, told the BBC that Russia will “target” the midterm elections this year. The very same day, it was reported that the Trump administration will not implement the new sanctions on Russia that Congress passed last year in legislation that Trump begrudgingly signed into law. So here we have word that the US political system remains under threat from Vladimir Putin’s covert information warfare campaign and that the Trump administration has decided not to intensify sanctions that might deter Moscow from again subverting American democracy. Still, these significant events received a sliver of the coverage devoted to the tussle over #releasethememo.

A stunt has kicked aside substance. Not only do the memo shenanigans deflect attention from the intelligence committee’s main job—probing the scandal; they also keep the spotlight from shining on a profound national security concern: the continuing threat from Russia. It is not well known that the Moscow cyber assault on the 2016 elections went beyond the presidential campaign. Russian hackers also broke into the Democratic Congressional Campaign Committee, the party outfit in charge of House races, and swiped and released key internal documents about some of the most important House races that year. This included the group’s strategy documents assessing the strengths and weaknesses of Democratic candidates and its confidential voter turn-out models. Moscow’s assault on the DCCC was an extensive operation that had an impact. In several House races, candidates used the leaked material to attack Democrats. (In primary contests, Democrats exploited the leaks against Democratic rivals. In the general election, Republicans did the same.) DCCC officials came to believe the dumps were a decisive factor in several races in which the Democrat lost.

This year, of course, much is riding on the midterm elections. If Democrats manage to gain control of the House, they will have the power to thwart Trump’s policy initiatives and the ability to investigate his administration—and to investigate elements of the Russia scandal overlooked or downplayed by the Republicans. The Democrats need to pick up 24 seats to attain a majority—a tall, but not impossible, order. Russian intervention in a handful of critical races could mean the difference between a House that continues to protect Trump and undercut the Russia scandal and a House that challenges Trump and digs aggressively. So there could be much incentive for Moscow to resort to its dirty tricks again.

This threat from Russia should be in the headlines—more than the antics of Nunes. Democrats ought to be publicly demanding more information from Pompeo and pressing Trump on what is being done to prevent a repeat of 2016. Trump’s sidestepping of the sanctions law ought to be fully examined in light of Pompeo’s underplayed warning.

Yet that is not what is happening. It is certainly true that the government’s use of its surveillance powers—and possible abuses—is a subject worthy of congressional inquiry. And Nunes’ gamesmanship warrants notice; deservedly or not, he is an important player in Washington. (On Wednesday night, Rep. Adam Schiff, the top Democrat on the House Intelligence Committee, reported that Nunes had fiddled with the still-secret memo, altering the version shared with the White House. On Thursday morning, House Democratic leader Nancy Pelosi called on House Speaker Paul Ryan to boot Nunes as chairman of the committee.) But the memo and all the hullabaloo it has caused is nothing compared with the prospect of Moscow once again undermining an American election.

It’s a truism: Donald Trump embraces chaos. Turmoil is useful for anyone hoping to keep the truth under wraps. In this case, if the media, the political opposition, and Twitter are chasing after the shiny memo, they are not zeroing in on the shortcomings of the congressional investigations or Pompeo’s statement or what the Trump administration is doing (or not doing) to thwart another Russian attack. Moreover, Team Trump wins if the Russia scandal can be made to seem like little more than a confusing partisan muddle, with participants squabbling over competing memos, so-called FISA warrants, the FBI, the Justice Department, a “secret society,” Uranium One, Hillary Clinton, the conduct of Robert Mueller’s probe, the Steele dossier, Fusion GPS, and anything other than what Putin did, how Trump aided and abetted the Kremlin’s operation, and links between Trump World and Russia.

It is easier to create a mess than carry out an orderly investigation into a sprawling scandal. So Trump and his comrades have an advantage—and they have exploited it well. They generate one minor attraction after another. Their supply of chaff is bottomless. Mueller appears to be steadfastly focused on his job of investigating the Trump-Russia affair for possible crimes. But he is doing so while his investigation is being bombarded each day and the Justice Department, for which he works, is under siege from Trump and his minions. And the congressional investigations—which are supposed to be aimed at unearthing the details of the Russian attack and the contacts between Trump’s circle and Russians for the public’s benefit—are certainly jeopardized by the attempts to distract and sabotage. One data point: Since 2015, the number of Republicans who say they trust the FBI has dropped 22 percent. This is a sign that Trump’s constant denigration of the bureau—which does the investigative work for Mueller—has helped his crusade to delegitimize the investigation.

In our nanosecond-driven news cycle, it can be tough not to jump at every new piece of chum thrown into the water. But Trump’s goal is to churn and muddy. Clarity is not his friend. He benefits when diversions take hold. And so does Putin.