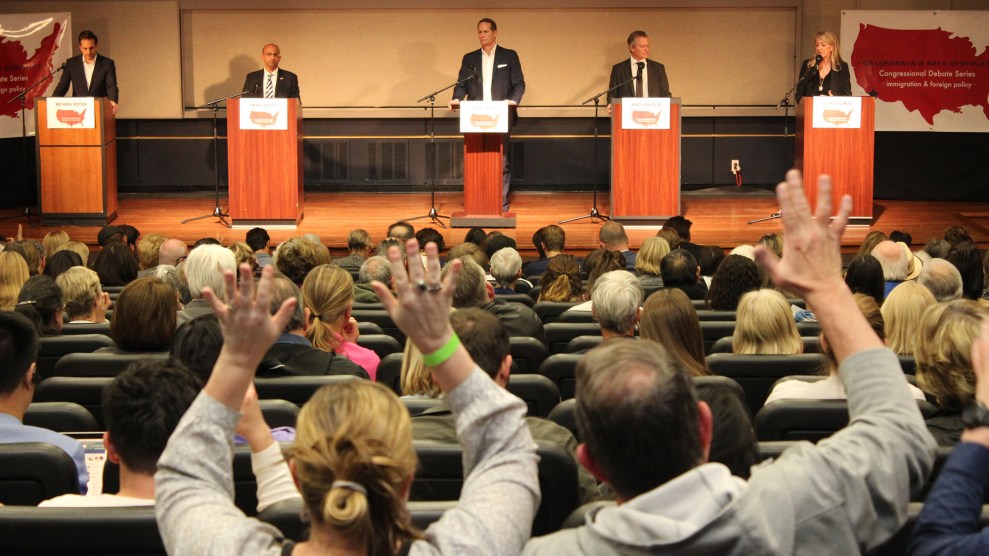 It was an hour and 40 minutes into a debate between Democratic candidates seeking to unseat Rep. Dana Rohrabacher (R-Calif.) last Tuesday night when Harley Rouda laid his trap. Each of the five candidates on stage was given the opportunity to ask another a question, and Rouda, a businessman and one of the frontrunners, zeroed in on his target. “Mr. Keirstead,” he said, turning to Hans Keirstead, a stem cell researcher who recently won the California Democratic Party’s endorsement, “I was just curious, in the 2016 primary, were you Bernie or Hillary—who did you vote for?”

“Was I Bernie or Hillary?” Keirstead responded. “Hillary.”

“Didn’t vote?” someone in the audience hissed. The moderator asked Keirstead if he wanted to explain why. Visibly uncomfortable, Keirstead replied, “You know, I missed a vote. I missed that vote. So—good catch, Harley.”

There was an audible gasp. The other candidates cringed. Rouda, looking pleased, smirked. And when Keirstead tried to explain himself by saying, “Like a lot of people, I’ve been busy,” some members of the audience booed.

It was a sour finale to what had been a civil and upbeat event, the second debate hosted by the local branch of the progressive grassroots organization Indivisible. Rohrabacher did not respond to an invitation to attend, so the evening focused on which Democrat could defeat the veteran Republican Politico dubbed “Putin’s favorite congressman,” currently serving his 15th term.

“It’s going to get real ugly between the primary and general. And I can’t wait to throw punches at Rohrabacher.”

California’s 48th District stretches across Orange County. It’s long been a Republican stronghold; Rohrabacher walloped his Democratic challenger by nearly 17 percentage points in 2016. Yet Hillary Clinton took the district by two points, and ever since the election of Donald Trump, it’s seen a groundswell of liberal activism. Protestors assemble in front of Rohrabacher’s office every Tuesday, and local organizers frequently host candidate forums for the eight Democrats who have jumped in the race. Last October, the Cook Political Report switched its assessment of the district from “Leans Republican” to “Toss Up,” and Democrats think they have a real chance at flipping it in November.

The five Democrats who attended the debate in Irvine were selected based on their Voter Support Scores (VSS), a formula based on each candidate’s number of donors, amounts raised from within the district, and their total cash on hand. Rouda and Keirstead topped Rohrabacher in fundraising last quarter. Another candidate, Omar Siddiqui, came in third for cash-on-hand, behind Rohrabacher and Rouda. (The Republicans challenging Rohrabacher didn’t score high enough to attend the debate.)

Foreign policy and immigration were the night’s themes, and the candidates debated everything from Guantanamo and the North Korean nuclear threat to DACA and the border wall. Their views rarely diverged; their differences showed mostly in their level of understanding of the topics and their ability to speak about them. Though Rouda had clearly done his homework, Siddiqui was the only candidate who showcased real-world expertise. A trial attorney and an FBI national security director of special projects, Siddiqui has attended a trial hearing at Guantanamo’s prison, and he helped derail President George W. Bush’s domestic spy program known as Operation Flex.

Rouda and Keirstead’s jabs at each other were not surprising; the two frontrunners have been attacking each other for months. In statements to the press and at debates, Rouda has been calling out Keirstead’s “lies.” At a local party meeting in November, Keirstead claimed that Democratic leaders wanted to make him chairman of the House science committee and that Minority Whip Steny H. Hoyer would like to give him an “early appointment” on the appropriations committee. Hoyer’s office called the claims “preposterous” and “[not] remotely true.” Keirstead walked back his statement. In January, after the California Democratic Party met to discuss possible endorsements in the 48th district, Keirstead’s campaign issued a press release titled, “Dr. Hans Keirstead Wins Endorsement Recommendation From California Democratic Party In Landslide Vote.” Yet he had received 67 percent of the delegates’ votes, not the 70 percent necessary to land the endorsement recommendation, and his campaign issued a correction. “It’s about time someone called him out on his lies,” Rouda told me before the debate.

In February, Rouda released a pair of attack ads on Keirstead, and their battle spilled into the state party convention at the end of the month. Keirstead won the California Democratic Party’s endorsement, but many observers and other candidates cried foul.”The whole thing felt, I don’t want to say ‘rigged,’ but kind of like it was predetermined. And that didn’t feel right to me,” said Shayna Lathus, an activist running for the Huntington Beach City Council. At the convention, five Democratic candidates from the district united to block Keirstead’s endorsement, urging the party not to endorse anyone. As they canvassed the convention, Keirstead’s campaign team and supporters trailed them so aggressively that security had to ask one to leave. The tactic so offended Adam Parkhomenko, a former advisor to Hillary Clinton, that he wrote, “Democrats don’t do this,” in a tweet about Keirstead’s team. (By the end of the convention, Parkhomenko had agreed to advise Rouda’s campaign.) Depending on which version of the story you believe, the opposing candidates were either too late in getting the signatures to challenge the endorsement, or they were intentionally shut out of the process at the last minute.

“I’ve had delegates come up to me and say, ‘You have more experience than all of the other candidates combined. But your problem? Change your name.'”

The other leading candidates in the race—Michael Kotick, Laura Oatman, and Omar Siddiqui—have otherwise stayed out of the Democrat-on-Democrat bomb throwing. Siddiqui and Oatman joke, with apparent sincerity, that if either of them wins the election, they’ll bring the other along to Washington, D.C. “I can handle foreign affairs, national security,” Siddiqui says. “She is passionate about women’s issues and the environment; she would be invaluable.”

But by playing nice, these three candidates have received less media attention. Siddiqui in particular faces a unique challenge. Siddiqui is the only person of color and the only Muslim in the race. At the end of the debate, Indivisible surveyed attendees about the candidates’ performance. Siddiqui’s campaign manager, Luis Aleman, stormed away from the survey table after seeing some of the responses. According to Aleman, someone had written, “I like Siddiqui the best. He’s the most qualified. But his ethnicity will get him killed in this district.” “How are you supposed to deal with that?” Aleman asked.

“People are always going to tell you that you can’t do it,” Siddiqui says. “I’ve had delegates come up to me and say, ‘Given your work as an engineer, a lawyer, an FBI national security advisor, you have more experience than all of the other candidates combined. But your problem? Change your name.'” Siddiqui claims he decided to run at the urging of former FBI director James Comey, and Barack Obama, who Siddiqui says told him, “If a guy by the name Barrack Hussein Obama can win—middle name Hussein, last name rhymes with Osama—yes you can.”

In California’s “jungle primary” system, the top-two vote-getters advance to the general election regardless of their party affiliation. While this could split the Democratic vote in a Republican-leaning district, that’s probably not an issue in the 48th, where Rohrabacher is seen as the only realistic Republican candidate. Instead, Democrats may have to worry about their candidates getting through the June primary without too many cuts and bruises to effectively take on Rohrabacher.

And if Rouda’s closing statement at the debate offers a glimpse of the near future, the next few months could be a bitter battle. “You need somebody that’s got the passion and the leadership to do this, and frankly they better be able to take a punch and throw a punch along the way, because it’s going to get real ugly between the primary and general,” Rouda said at the debate. “And I can’t wait to throw punches at Rohrabacher.”