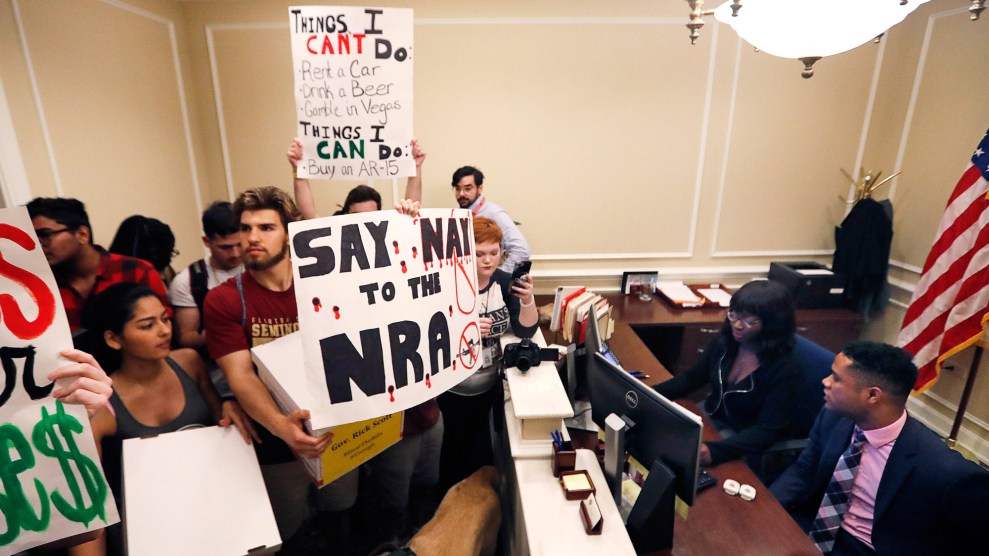 People crowd the entrance to the office of Florida Gov. Rick Scott with boxes of petitions for gun control reform in February.Gerald Herbert/AP

On Monday night, the Republican-controlled Florida Senate narrowly passed a sweeping bill that implements gun restrictions, invests in mental health services, and arms some school personnel in response to the deadly school shooting in Parkland, Florida, weeks ago.

The bill, known as the Marjory Stoneman Douglas High School Public Safety Act, has received criticism for its proposal to let some school personnel carry firearms on campuses. The legislation has been amended to exempt classroom teachers from the so-called “school marshal” program if their districts decide to participate in it. Support staff, current and former servicemen, and JROTC teachers would be permitted to carry weapons if they received 132 hours of firearm safety training and at least 12 hours of diversity training. Those who participate in the program would receive a one-time stipend of $500.

If passed, the bill would also raise the minimum age for all gun purchases to 21 years old, ban the sale and possession of bump stocks, and require a three-day waiting period for gun purchases. It would also allow law enforcement to petition a court to take away guns from people who are considered dangerous by a judge.

Additionally, the legislation diverts $400 million in funding toward mental health and school safety measures that includes $97 million toward hiring more school resource officers in Florida. Aside from the three-day waiting period, the legislation largely mirrors the original proposals made by Gov. Rick Scott nine days after the mass shooting at Stoneman Douglas that left 17 dead.

Texas and South Dakota currently have similar marshal programs to the one described in Marjory Stoneman Douglas High School Public Safety Act, and at least eight states explicitly allow school personnel including teachers to carry or a firearm on K-12 school grounds. In at least seven states, including Florida, lawmakers are considering bills that would loosen restrictions on whether firearms are allowed on campus, according to the Education Commission of the States.

Before Monday’s amendment, the Senate bill would have allowed teachers to opt into the marshal program, an idea that has been praised by President Donald Trump. But that proposal drew significant opposition from survivors from the Stoneman Douglas shooting, members of Florida’s Legislative Black Caucus, and Gov. Scott. A Quinnipiac University poll found that 56 percent of Florida voters opposed letting teachers carry guns in schools. State senators voted down a proposed amendment over the weekend to outright ban assault rifles like the ones used by the Stoneman Douglas shooter.

The state Senate bill, which passed by only two votes, is now expected to head to the House before it reaches Scott’s desk before the end of the legislative session on March 9.