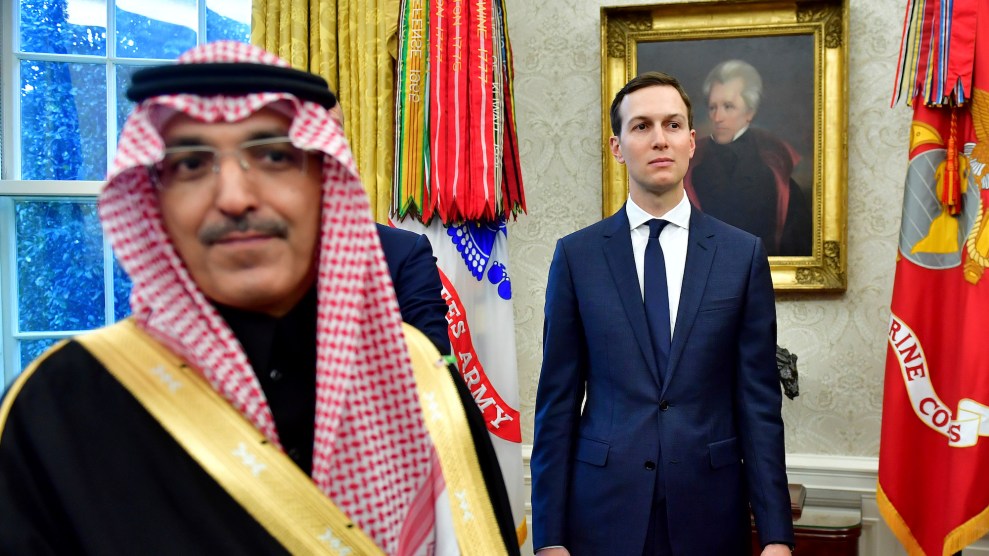 For months, a high-stakes geopolitical battle has been quietly playing out in Washington, DC, between Qatar and its Middle East neighbors, Saudi Arabia and the United Arab Emirates. Each side has its advocates and influence-peddlers in the nation’s capital. This fierce proxy battle has ensnared top Republican players, including Elliott Broidy, a prominent fundraiser, and the president’s son-in-law, Jared Kushner—and the the main weapon has been leaks of damaging information to the press.

The skirmish exploded into the open on Monday when Broidy filed suit against Qatar and one of its lobbyists, a former Trump campaign aide named Nick Muzin. Since February, Broidy, who in 2009 pleaded guilty to a misdemeanor charge for making illegal gifts to New York State officials, has been hammered by a series of news reports alleging that he peddled influence with President Donald Trump and top administration officials to score various deals and win lucrative foreign contracts for his Virginia-based defense firm, Circinus. His suit alleges Qatar hacked into the email accounts of Broidy and his wife and then disseminated damaging emails and documents to the press. And it charges that Muzin knew of the hack and helped to orchestrate a smear campaign against him. The suit also names 10 “John Does.” That’s a suggestion by Broidy’s lawyers that they may later name additional plaintiffs in the lawsuit.

The chances that a lawsuit against a foreign state for hacking can succeed are uncertain. A lawyer for Broidy called it “the first of its kind.” But in naming Muzin, Broidy exposed a previously shrouded battle within a small community of mostly Orthodox Jewish Republicans who have represented opposite sides of a regional conflict that has pitted Qatar against Saudi Arabia and the United Arab Emirates.

The lobbying feud has also embroiled Kushner, who was seen by Qatar as a close ally of UAE’s leaders. Kushner has recently been the subject of media scrutiny over his family’s efforts to secure financing from Qatar for a debt-ridden Manhattan property, as well as over his close relations with the leaders of the UAE and Saudi Arabia. Last week, the Intercept reported that the Saudi crown prince had bragged of having Kushner “in his pocket.” The crown prince subsequently denied making that claim. And according to sources with knowledge of the Washington influence campaign undertaken by Qatar, Kushner and Broidy are among a list of influential Republicans whom Muzin identified to the Qataris as standing in the way of their DC agenda.

The wrangling by Qatar and its rivals has also factored into special counsel Robert Mueller’s investigation. George Nader, a Lebanese-born U.S. citizen who is an adviser to the UAE’s crown prince, is reportedly cooperating with Mueller’s probe, detailing alleged Emirati efforts to influence Trump by other means.

Tensions between Qatar and its neighbors erupted in June when Saudi Arabia, the UAE, and Bahrain imposed a blockade against the country over its ties to Iran and alleged connections to terrorist groups. The blockade sparked a diplomatic crisis but also created a business opportunity for DC’s army of lobbyists. The states involved are rich in oil and gas money. And they were eager for help forging ties with a new administration seemingly primed for lobbying.

The Qataris, according to multiple lobbyists who represent the country, believe the Saudis and Emiratis had executed an influence campaign to isolate the smaller nation, lining up support from key US players, including Kushner and Broidy. Kushner, whose diverse White House portfolio includes pursuing a Middle East peace deal, helped organize Trump’s visit to Saudi Arabia last May, a few weeks before the blockade. He supported a large US arms deal with the Saudis, and he is reportedly in close contact with top UAE officials.

On May 23, 2017, Broidy worked with two think tanks to host a Washington conference highlighting Qatar’s ties to Egypt’s Muslim Brotherhood and allegedly to terror groups. Broidy and people who work for him also pushed for legislation, introduced on May 25, 2017, by House Foreign Affairs Committee Chairman Ed Royce (R-Calif.), that labeled Qatar a sponsor of terrorism due to its support for Hamas and other organizations.

Broidy later received a $2.5 million payment from Nader, money Nader described as covering the expenses of the conferences Broidy organized. In January 2018, Broidy’s defense firm signed contracts worth $200 million with the UAE.

After the blockade, the Qataris raced to assemble a team of connected DC courtiers who could help them compete with their regional rivals. Qatar’s US Embassy hired Muzin,’s firm, Stonington Strategies, which they currently pay $300,000 per month; Avenue Strategies, the former home of Corey Lewandowski; Mercury Public Affairs, a well-heeled GOP firm; former Attorney General John Ashcroft’s law firm; and others. By late 2017, Justice Department records show, Qatar was paying more than $2 million a month to DC lobbyists.

Saudi Arabia and the UAE are effectively allies of Israel in the Middle East, while Qatar, though it is home to a large US military base, has appeared to tilt toward Iran and Hamas. Muzin worked to improve Qatar’s standing with influential, conservative American Jews, who tend to closely track Middle Eastern affairs.

Muzin organized junkets to Qatar for prominent Jewish figures including Alan Dershowitz, Morton Klein, the head of the hawkish Zionist Organization of America, and Malcolm Hoenlein, the executive vice chairman of the Conference of Major Jewish Organizations.

Broidy, a board member of the Republican Jewish Coalition, was one of several prominent Jewish conservatives who criticized Muzin’s effort. According to his suit, Broidy discouraged other American Jewish leaders from joining the trips. Last month, Muzin sent a cease-and-desist letter to a Broidy associate that charged that the associate had maligned Muzin and his work for Qatar to Klein and influential Jewish officials. “We also understand that you are feeding false information to reporters who have, in turn, written false statements in published articles related to Dr. Muzin’s work on behalf of the State of Qatar,” the letter says, without identifying the articles.

Since his hiring by Qatar last July, Muzin has identified several prominent American Jewish figures including Kushner, Broidy, and Rabbi Shmuley Boteach, a well-known Jewish pundit and author, as key obstacles to Qatar’s efforts to improve its ties to the Trump administration, according to sources familiar with the Qatari lobbying effort. A Kushner spokesman did not respond to inquires.

Broidy alleges in his lawsuit that Qatar’s effort to neutralize him included hacking. On December 27, 2017, Robin Rosenzweig, Broidy’s wife, received what appeared to be a Gmail security alert requesting her credentials, the suit says. In fact, it was a phishing attack similar to one that helped Russian hackers gain access to former Clinton campaign chairman John Podesta’s email account. Once inside Rosenzweig’s email account, the hackers accessed files that gave them passwords to Broidy’s email accounts as well.

A few months later, media reports began appearing that cited emails from the couple that seemed to implicate Broidy in an effort to leverage his access to the Trump administration on behalf of an array of foreign interests. On March 1, the Wall Street Journal reported that Broidy and his wife had been negotiating a deal with a Malaysian businessman to use their influence with the Trump administration to end a Justice Department probe into corruption by the businessman and other associates of Malaysia’s president. Subsequent articles in the New York Times, HuffPost, Bloomberg, McClatchy, and elsewhere cited emails obtained from an anonymous group targeting Broidy. Broidy says some of the documents distributed by the group were doctored or forged, though he says he cannot easily prove that, because the hackers deleted the original messages from his files.

After discovering the breach, Broidy hired an “advanced cyber unit” to conduct a forensic analysis of Broidy’s email server log according to his suit. The review found that hackers accessed his email account between January 16 and March 2 and determined that the perpetrators, despite their efforts to cover their tracks, accessed his emails from Qatar.

The suit charges that Al Jazeera, an international broadcaster based in Qatar, had published a story based on “clearly falsified or forged documents” that asserted Broidy engaged in an investment deal with a sanctioned Russian bank. Mother Jones also received the documents that Al Jazeera cited but declined to report on them because their authenticity could not be confirmed.

Broidy’s lawsuit alleges that Muzin helped orchestrate the effort to smear him in the press using hacked documents. According to the suit, Muzin told another person involved in the dispute that he had “some knowledge” of the Qatari campaign against Broidy, and that he had discussed Broidy’s ties to the UAE at meetings at the Qatari Embassy in Washington. Muzin’s statements “demonstrated his knowledge of and encouragement of the unlawful conduct” toward Broidy, the lawsuit says.

A spokesman for the embassy called Broidy’s suit “a transparent attempt to divert attention from U.S. media reports about his activities.” In a statement, Muzin said the lawsuit “is an obvious attempt to draw attention away from his controversial work, and is as flimsy as the promises he reportedly made to his clients.”

He added, “I am proud of the work my firm has conducted with Qatar and look forward to continuing to support peaceful dialogue and progress in the Middle East.”