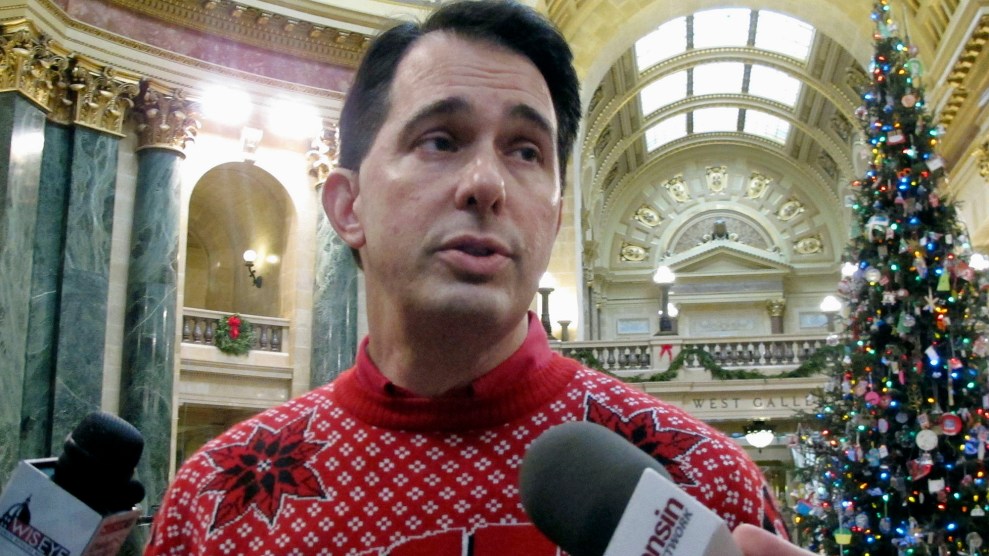 After months of delay and Republican attempts to defy court orders, Wisconsin Gov. Scott Walker finally agreed to schedule special elections to fill vacant two state legislative seats. The primaries will be May 15 and the general elections June 12. The Republican leaders of the state legislature also dropped plans to convene a special session to change Wisconsin law and cancel the elections.

Walker initially refused to schedule elections after two Republican members of the legislature—one from the state Senate and another from the state Assembly—joined his administration in December, claiming it would be a waste of money since the legislature was set to adjourn in the spring. A Democratic group led by former Attorney General Eric Holder sued him, and on March 22 Dane County Circuit Court Judge Josann Reynolds ruled that the governor had a “plain and positive duty” to hold the elections. Republican legislative leaders then attacked Reynolds as an “activist Dane County judge,” even though she was appointed by Walker in 2014, and announced they would re-convene to pass legislation to nullify the elections.

Walker went back to court to ask for more time to postpone holding the elections, but two different courts ruled he was constitutionally required to schedule them. “Representative government and the election of our representatives are never ‘unnecessary,’ never a ‘waste of taxpayer resources,’ and the calling of the special elections are, as the governor acknowledges, his ‘obligation,’” Court of Appeals Judge Paul Reilly, a Republican, ruled on Wednesday in a pointed rebuke to the governor. Walker then dropped his appeal and scheduled the elections for June. Holder called the court decisions “a victory for the citizens of Wisconsin who are without representation because of Governor Walker’s refusal to do his job.”

Walker might have conceded defeat and scheduled the elections, but he’s not done complaining. The governor spent Thursday morning sending out a string of tweets raging against Holder.

Obama Attorney General Eric Holder and his Washington, D.C.-based special interest group are behind the legal push to force Wisconsin taxpayers to pay for special elections for seats that will be filled in a few months in the normal elections.

Wisconsin Democrats said Walker had refused to hold the elections because he was afraid Democrats might flip the seats. In January, Democrat Patty Schachtner won a shocking upset by 11 points in a northwest Wisconsin state Senate district that had been in GOP hands since 2000 and Donald Trump carried by 17 points in 2016.

However, in other crucial swing states Republicans are still pushing forward with attacks on courts that have constrained their power. Pennsylvania Republicans have introduced legislation to impeach Democratic state Supreme Court Justices who overturned the state’s congressional redistricting maps, while North Carolina Republicans have passed a series of bills to undermine the independence of the courts.