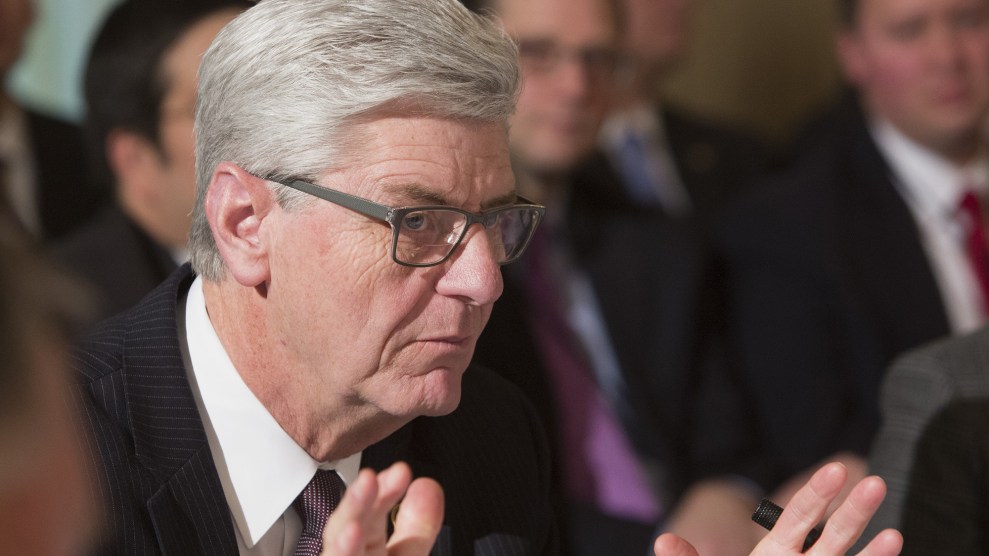 Phil Bryant, governor of Mississippi, participates in a meeting with state and local officials regarding the Trump infrastructure plan Chris Kleponis/ZUMA

Mississippi Gov. Phil Bryant, who has said his “goal is to end abortion” in his state, on Monday signed into law the earliest abortion ban in the country that’s in effect.

The law outlaws abortion after 15 weeks of pregnancy, and the only exceptions are in cases where the mother’s life is in danger or there is a fetal abnormality that is “incompatible with life.” Senators rejected an amendment that would have made exceptions for victims of rape or incest. Sen. Joey Fillingane (R-Sumrall) said such exceptions wouldn’t be necessary since women who become pregnant as a result of rape or incest would get an abortion right away because “you know immediately that you have been the victim of rape or incest.”

Felicia Brown Williams, director of public policy for Planned Parenthood Southeast, countered that the trauma of that kind of violence often means it takes longer for a woman to seek an abortion. “Those who have suffered at the hands of abusers may actually need additional grace,” Williams said.

Mississippi’s Lt. Gov. Tate Reeves praised the legislation as “a major step” in “protecting the lives of unborn children.”

“I am committed to making Mississippi the safest place in America for an unborn child,”  he said in a press release.

Seventeen states ban abortions after about 20 weeks of pregnancy, the point after which, according to anti-abortion activists, the fetus can feel pain. Several states, including Mississippi, have attempted to pass “heartbeat bills,” which would effectively ban abortion at six weeks, the time when anti-abortion advocates say a fetal heartbeat can be detected. None of the proposed legislation has ever made it into law due to constitutional challenges, meaning Mississippi’s new law is the strictest in the country.

During a committee hearing on the bill, Fillingane argued that although 20 weeks has long been the anti-abortion benchmark for viability (when the fetus can survive on its own outside of the womb)—a talking point that has been widely debunked—technological advancements now make it possible for a fetus to survive at 15 weeks.

The Mississippi law tests the limits of the right to abortion as defined in the Supreme Court’s 1973 Roe v. Wade decision, as well as the definition of what constitutes an “undue burden” on that right as established in Planned Parenthood v. Casey. Diane Derzis, the owner of Jackson Women’s Health Organization, Mississippi’s only abortion clinic, says she plans to sue on the grounds of constitutionality.

Derzis told the Clarion-Ledger that abortion opponents “are tossing anything and everything out there, anything that could start winding its way through the legal system because we’re in a very fragile place right now.”

Mississippi has long been the site of some of the fiercest abortion wars in the country, and it’s taken a toll—the state went down to one abortion clinic in 2006. Jackson Women’s Health Organization has been fighting to stay open ever since.

Dr. Willie Parker, an Alabama abortion provider who serves as chair for Physicians for Reproductive Health and has been a plaintiff in past lawsuits to keep Jackson Women’s Health Organization in operation, said any loss of time for women to make arrangements to get an abortion is significant and creates a barrier to access.

“This regulatory overreach where you have people making policies from a political point of view versus a health and safety point of view, it’s just more of the same,” Parker told Mother Jones. “There’s nothing unique about this—it’s a legislative means to a political end.”

The United Health Foundation ranked Mississippi last in its annual health rankings report last year, and the state has the highest rate of infant mortality in the country, as well the third-highest teen birth rate (which predominantly affects women of color). The state is also the poorest in the country and has the largest uninsured population. Mississippi has the third-highest rate of adult obesity in America, which Parker pointed out can cause irregular menstruation and therefore make it difficult to detect a pregnancy early.

Mississippi already has a 20-week abortion ban and a 24-hour waiting period to get an abortion after receiving counseling, necessitating two trips to a clinic. The use of telemedicine to perform a medical abortion is banned, and women must have an ultrasound before her procedure, during which the provider must offer the option to view the image.

Parker says that although Mississippi’s disadvantages are striking and important to note, the legislative struggle over abortion access reflects the state of the nation.

“This approach to enact draconian laws is not unique to the South; it’s just more pronounced in the South,” Parker said. “If we don’t mount a significant opposition to these types of laws in every place they arise, before long, all of reproductive rights will give way at the peril of all women.”