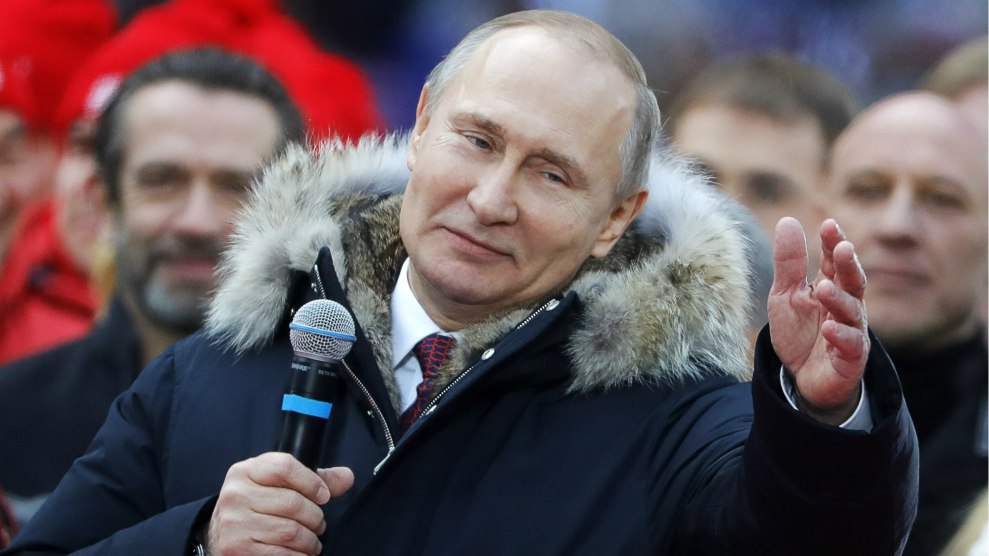 Russian President Vladimir Putin says he won’t extradite the 13 Russians indicted by special counsel Robert Mueller last month. It never seemed likely that American prosecutors would be able to get their hands on the alleged Russian operatives, even though some travelled to the United States for the operation.

Putin is strident in his insistence that the US won’t touch the 13 accused operatives. “Never. Never. Russia does not extradite its citizens to anyone,” Putin said in an interview with NBC News that is scheduled to air later Sunday.

The Russians were indicted for participating in what Mueller’s office has described as a sophisticated operation targeting the 2016 presidential election, orchestrated by a Russian state agency, that used social media to stir up tensions around divisive political issues, and even helped organize real world political rallies. The indictment focused on the Internet Research Agency, a Kremlin-linked Russian “troll factory” based in St. Petersburg, noting that the operation “had a strategic goal to sow discord in the U.S. political system.” That apparently included  “supporting the presidential campaign of then Donald J. Trump…and disparaging Hillary Clinton.”

Mueller’s 37-page indictment included details that suggest that the operatives were not particularly stealthy. For example, investigators obtained a copy of an email sent to a family member by one of the indicted Russians, in which she wrote: “We had a slight crisis here at work: the FBI busted our activity (not a joke). So, I got preoccupied with covering tracks together with the colleagues.”

In the interview, Putin insisted that the US had failed to provide any detailed information showing that Russia was in any way involved. While insisting he would not turn over the indicted Russians, Putin also professed total ignorance of who they had worked for and what they had done.

“I know that they do not represent the Russian state, the Russian authorities,” Putin said. “What they did specifically, I have no idea.”

When pressed, Putin, who was interviewed by Megyn Kelly, respond derisively, claiming that there was no evidence the 13 had violated any Russian laws so he was powerless to do anything.

“If you don’t have a legal degree I can explain it to you,” Putin added.

In an exclusive interview with NBC News’ @MegynKelly, Russian President Vladimir Putin discusses whether he will try to put a stop to meddling in future U.S. elections. pic.twitter.com/yXX7sxWAQR

Putin’s strident tone on the investigation follows an aggressive speech last Thursday in which he unveiled what he said were new nuclear weapons. While not mentioning the US directly, he said that Russia would “instantaneously” respond to any nuclear attack, “no matter what the consequences are.” He accompanied the speech with an animated video showing an ICBM missile striking a map of Florida, although the Kremlin insisted it was not actually Florida.

Putin is up for reelection on March 18.