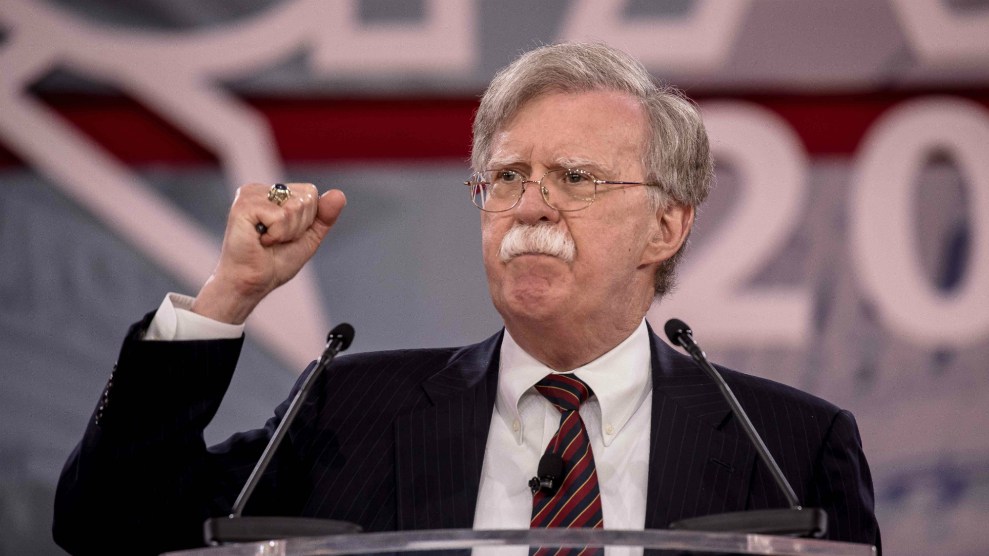 President Trump announced Thursday night that he is replacing National Security Advisor H.R. McMaster with former Ambassador to the United Nations John Bolton—a step that puts a man famous for advocating preemptive wars in a position to help start one. Following Trump’s nomination of CIA Director Mike Pompeo to be Secretary of State, Bolton’s appointment means Trump has handed national security policy to the hawks.

McMaster has been known for restraining Trump’s bellicose tendencies. There is little sign Bolton will do the same. Just last month he urged a preemptive military strike by the United States on North Korea. “It is perfectly legitimate for the United States to respond to the current ‘necessity’ posed by North Korea’s nuclear weapons by striking first,” he wrote in a Wall Street Journal op-ed.

Bolton was a leading advocate of the 2003 invasion of Iraq and served in the George W. Bush administration, first as an undersecretary of state for arms control and nonproliferation, where he opposed international arms control and nonproliferation efforts. He was then a UN Ambassador who opposed international organizations like the very one he was working in.

Since leaving government he has positioned himself as a Republican political operative—and he mulled 2012 presidential bid—as well as a reliable supporter for war. In 2009, Bolton, in a speech at the University of Chicago, seemed to call for Israel to launch a preemptive nuclear attack on Iran: “Unless Israel is prepared to use nuclear weapons against Iran’s program, Iran will have nuclear weapons in the very near future.” In a 2012 speech at the Conservative Political Action Conference, he joked about a nuclear attack on Chicago, President Obama’s hometown. The crack was part of a riff in which he accused Obama of lacking a backbone in dealing with Russian President Vladimir Putin. Obama “put us in a greatly weakened position” with Russia, Bolton said.

But Bolton’s views on Russia have since apparently evolved. On Fox News on Thursday, Bolton declined to fault Trump’s decision to congratulate Putin on his victory in an election widely seen as illegitimate—a move that drew bipartisan condemnation. “It’s a matter of being polite,” Bolton said.

In 2013, Bolton was himself “polite,” taking part in a bizarre video in which he implored the Russian government to loosen gun laws. The video was used by a Russian gun rights group created by Alexander Torshin, a former Russian senator and ally of Putin. At the time, Torshin was trying to cultivate ties to the National Rifle Association and went on to seek contact with the 2016 Trump campaign. Torshin is now the subject of a reported FBI investigation into whether he used the NRA to funnel funds to Trump’s campaign.

That is not Bolton’s only tie to the Trump-Russia scandal. He heads a superPAC that has paid at least $1.1 million to political data firm Cambridge Analytica—the company accused of improperly obtaining data on at least 50 million Facebook users and which also had ties to other Russians. The biggest donor to Bolton’s committee, forking over more than $3 million since 2015, is Robert Mercer, the billionaire founder of Cambridge Analytica.

Bolton is a uniquely controversial and dangerous pick as Trump’s top national security aide. CNN reported Thursday that Bolton promised Trump “he wouldn’t start any wars” in the new job. But now the worry is that it is Trump who will start the wars—and that John Bolton will help him.