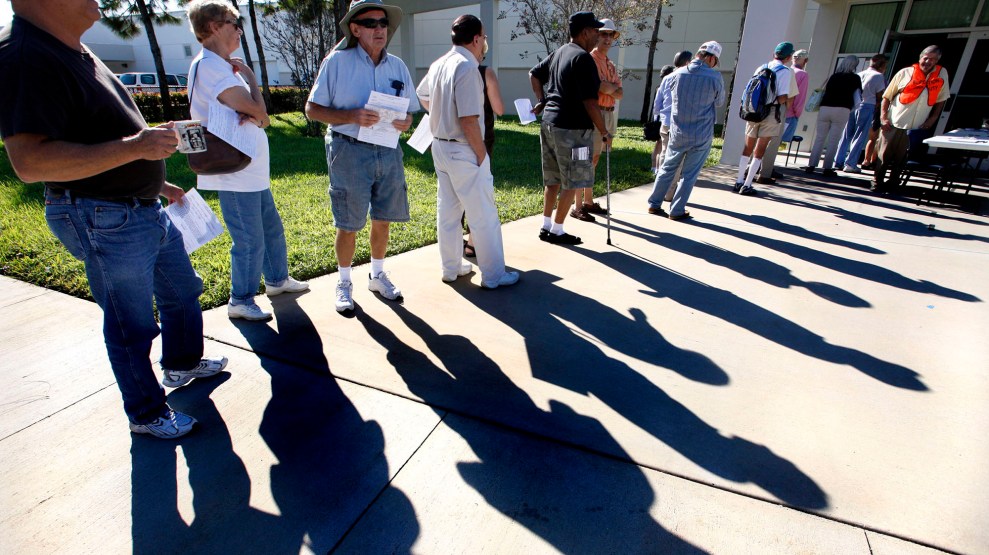 Voters wait outside the Supervisor of Elections office in Palm Beach County, Florida, to vote early in the 2010 midterm elections.The Palm Beach Post/ZUMA

A conservative legal group’s crusade to purge voter lists across the country hit a setback Friday when a federal judge in Florida ruled that Broward County was already adequately maintaining its voter file. In doing so, the judge rebuffed the group’s efforts to force the heavily Democratic county to implement procedures that voting rights advocates say could have resulted in eligible voters being removed from the rolls.

The case is one of many filed by the American Civil Rights Union, which claims that numerous counties throughout the country are shirking their duty under federal law to remove ineligible voters. One of the leaders of the effort is J. Christian Adams, a former member of President Donald Trump’s election integrity commission. Adams, a conservative legal activist, claims that voter fraud exists in the United States on a large scale, particularly among non-citizens, though his research on the matter has proved dubious at best. (The overwhelming weight of the evidence suggests that voter fraud is extremely rare.) Adams is an ally of Kansas Secretary of State Kris Kobach, and both have advocated for laws that force voters to show proof of citizenship in order to register.

In her decision Friday, Judge Beth Bloom rejected key arguments put forward by ACRU. Among them was ACRU’s contention that Broward County had more registered voters than eligible citizens, which the group put forward as proof that the superintendent of elections is not fulfilling her list-maintenance responsibilities. Some experts have raised doubts about this assertion, and Bloom agreed with those critics, calling the calculations of ACRU’s expert witness “misleading” and the evidence put forward by ACRU on the topic “inaccurate.”

ACRU had also argued that the standard for what qualifies as a “reasonable effort” to maintain accurate rolls—the legal requirement—should depend on the population of a county: A large county with an ever-changing population and a high registration rate compared to the eligible population (the same statistic Bloom found unreliable) should have to undertake more list maintenance efforts than one whose population is more static. Such a standard of reasonableness could result in more purging in urban areas, which often have more voters of color and are more likely to back Democrats. Bloom found that this interpretation of reasonableness would be unworkable. “ACRU’s proposed definition of ‘reasonable efforts’ is too subjective and would lead to an arbitrary, non-uniform, unworkable, and unpredictable application,” she concluded.

As Mother Jones reported last year, Adams and ACRU have filed similar suits across the country in recent years—first in small, rural counties, including some with large minority populations. Rather than fight in court, many of these counties agreed to consent decrees that imposed additional list maintenance requirements. In 2016, the group filed suits against large, Democratic-leaning jurisdictions in swing states, including Broward County. This was the first case against a large county to reach trial.

A fed ct just rejected an attempt to force Broward County to purge voters more aggressively. And important for elsewhere: the court dug in to the "more voters than eligible people" argument, and called out the bad math. https://t.co/UTbuM2Zw7N