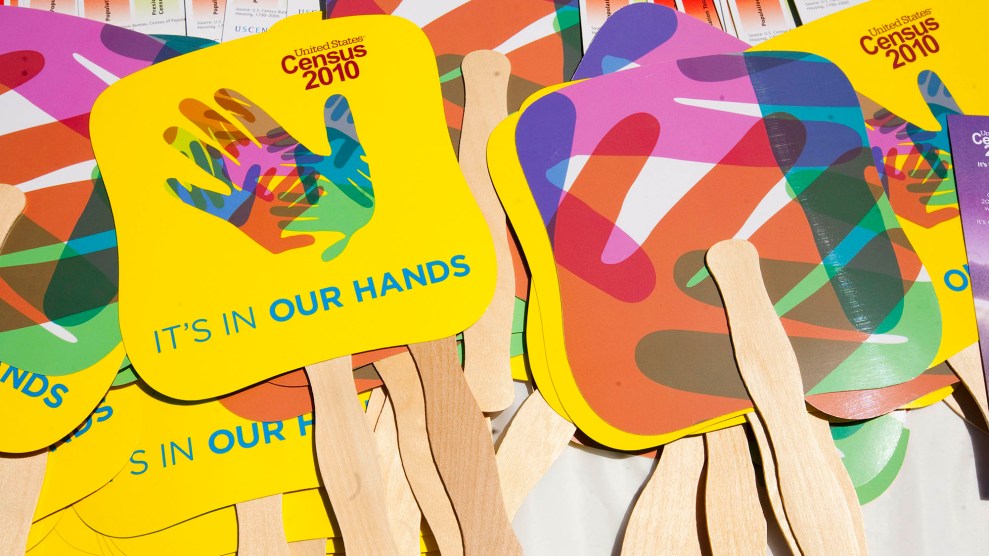 In December, the Justice Department asked the Census Bureau to add a question about US citizenship to the 2020 census form, a move civil rights groups say would massively depress responses from immigrants fearful of deportation. Now we know who’s behind that push. The revelations reveal a concerted effort by high-level Trump administration officials to put the citizenship question on the census and suggest that the decennial population count could be manipulated for political purposes.

ProPublica reported on Wednesday that John Gore, the Justice Department’s acting assistant attorney general for civil rights, drafted the letter requesting a question about US citizenship. But the emails uncovered by ProPublica through a public records request show that Arthur Gary, the general counsel of the department’s Justice Management Division, said the citizenship letter was sent “at the request of leadership, working with John.” That suggests to Vanita Gupta, who led the Justice Department’s Civil Rights Division under President Barack Obama, that the letter was written in consultation with Attorney General Jeff Sessions and former Associate Attorney General Rachel Brand, who oversaw the Civil Rights Division.

“I don’t think there’s a question that Sessions and Brand were involved,” says Gupta, who’s now president of the Leadership Conference on Civil Rights. “A question like that wouldn’t get through without careful vetting straight up to the highest levels of the Justice Department.”

The Justice Department said the citizenship question—which has not been asked on the census form since 1950—was needed to enforce the Voting Rights Act. The Commerce Department, which oversees the Census Bureau, has until March 31 to decide whether to adopt the question. (The citizenship question is already asked on the longer American Community Survey, which reaches roughly 13 percent of American households.)

“That will sabotage the entire census count, making it impossible to convince people to fill out the form,” Arturo Vargas, executive director of the National Association of Latino Elected and Appointed Officials Education Fund, told me last month.

Gore has a long history of supporting policies that have restricted voting rights and run afoul of the Voting Rights Act, as Mother Jones has reported. At the Justice Department, he drafted briefs supporting Texas’s voter ID law and voter purging in Ohio, both of which courts found violated federal voting rights laws. In private practice at the law firm Jones Day, he defended Republican redistricting efforts in several states, including in Virginia, whose electoral map courts later invalidated for racial gerrymandering. He also defended a voter purge in Florida that would have disproportionately removed voters of color from the rolls had it not been blocked by the courts.

The census determines how more than $600 billion in federal funding is allocated to states and localities, and how legislative districts are drawn. If immigrant communities don’t respond to the census for fear that it will be used to initiative deportation proceedings against them, that would shift economic and political power to whiter and more Republican areas. Internal focus groups conducted by the Census Bureau last year found that “fears, particularly among immigrant respondents, have increased markedly” under the Trump administration.

Civil rights advocates see the citizenship question as the latest in a series of efforts to politicize the census. The Trump administration reportedly intended to appoint Thomas Brunell, a professor of political science who defended GOP redistricting efforts in more than a dozen states, as deputy director of the Census Bureau, the position that oversees the decennial count. He withdrew from consideration last month, as Mother Jones first reported.

ProPublica also reported that Christopher Stanley, a former aide to Sen. David Vitter (R-La.), has been named head of congressional affairs for the Census Bureau. Vitter, who retired in January, has repeatedly introduced legislation to require the bureau to ask about citizenship and immigration status on the census form. Vitter wants legislative maps to be drawn based on the number of US citizens in a district rather than the total population, which would significantly diminish political representation for areas with large numbers of noncitizens, like California.

Congress rejected Vitter’s request in 2010. Six former directors of the bureau said it would “put the accuracy of the enumeration in all communities at risk.”