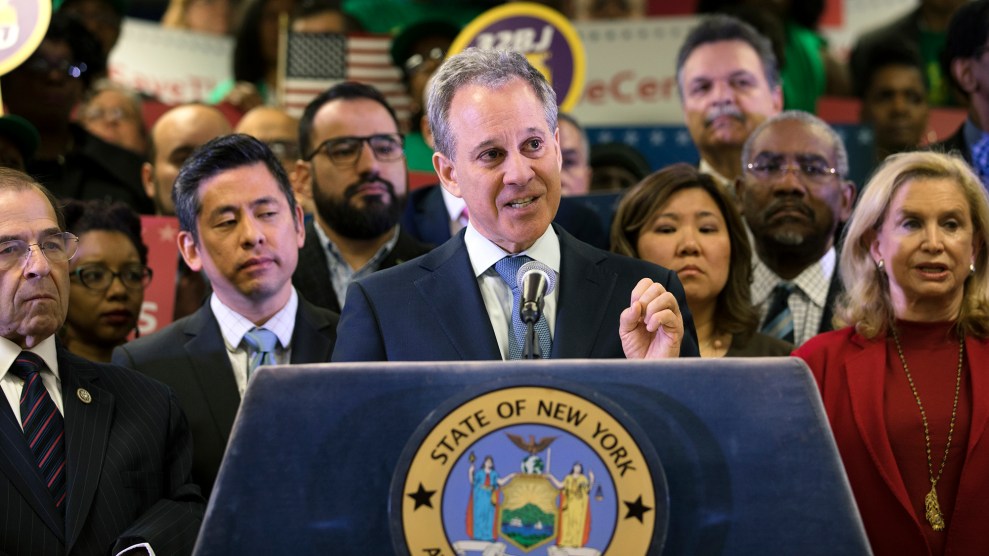 Seventeen states, the District of Columbia, and six major cities sued the Trump administration on Tuesday over the addition of a controversial new question about US citizenship to the 2020 census. This is the third major lawsuit against the administration’s action, after California and the NAACP sued last week, marking a major escalation of the legal and political battle over the census. Civil rights advocates say the question is designed to spark fear in immigrant respondents and will cause many immigrants not to be counted, diminishing the political power and financial resources of the jurisdictions where they live.

“This is a blatant effort to undermine the census and prevent the census from carrying out its Constitutional mandate,” said New York Attorney General Eric Schneiderman, who organized the multi-state lawsuit, at a press conference in lower Manhattan. New York has the third-largest immigrant population in the country, after California and Texas. More than 1 in 5 New York residents are foreign-born. “This is an effort to punish states like New York that welcome immigrants,” Schneiderman said.

The lawsuit says the new question “violates the constitutional mandate to conduct an ‘actual Enumeration’” of the country’s entire population, not just citizens, as well as a provision of the 1946 Administrative Procedure Act barring federal agencies from taking “arbitrary, capricious” actions.

The lawsuit was filed by New York, Connecticut, Delaware, Illinois, Iowa, Maryland, Massachusetts, Minnesota, New Jersey, New Mexico, North Carolina, Oregon, Pennsylvania, Rhode Island, Vermont, Virginia, Washington, and the District of Columbia, and joined by the cities of Chicago, New York, Philadelphia, Providence, San Francisco, and Seattle. The bipartisan US Conference of Mayors, which represents the 1,400 cities with a population of 30,000 or more, also joined the suit.

The census determines how $675 billion in federal funding is allocated to states and localities, how many congressional seats and electoral votes states receive, and how voting districts are drawn. If immigrant communities don’t respond to the census because of fear over the citizenship question, that would deny significant federal resources and political representation to diverse states like New York and California, and shift economic and political power to whiter and more Republican areas.

“If Republicans rig the census, there are no do-overs.” https://t.co/XxWvDyUGV7 pic.twitter.com/52A2htKXuU

The last census, in 2010, failed to count 1.5 million people of color while overcounting white Americans. As Mother Jones has reported, that undercount of minorities and immigrants could get much worse under Trump.

“The Defendants’ decision to add a citizenship demand to the 2020 Census questionnaire will add to this unprecedented level of anxiety in immigrant communities,” the lawsuit states. “It will lead to nonresponse and lower participation by many immigrants who are citizens and legal residents and live in mixed immigration status households, as well as by undocumented immigrants, all of whom may seek to protect their own privacy or the privacy of their household.”

Past leaders of the Census Bureau and current advisers to the bureau have also blasted the question. Six former bureau directors, who served under Republican and Democratic presidents, told Commerce Secretary Wilbur Ross in January that “an untested question on citizenship status at this late point in the decennial planning process would put the accuracy of the enumeration and success of the census in all communities at grave risk.” Members of the bureau’s Scientific Advisory Committee, who are appointed by the director, blasted the decision at a meeting of the Census Bureau last week.

“I want to say in no uncertain terms that I think this is an absolutely awful decision,” said D. Sunshine Hillygus, a professor of political science at Duke University. “I am dumbfounded that this decision is coming in at such a late date. My view is that this is going to have severe negative implications for data quality and costs.”

She began her PowerPoint presentation at census headquarters with the phrase “W.T.H.,” short for “what the hell.”

The Commerce Department, which oversees the census, said the new question was needed to better enforce the Voting Rights Act, but Vanita Gupta, the former head of the Justice Department’s Civil Rights Division under Barack Obama, told Mother Jones that was “plainly a ruse to collect that data and ultimately to sabotage the census.”