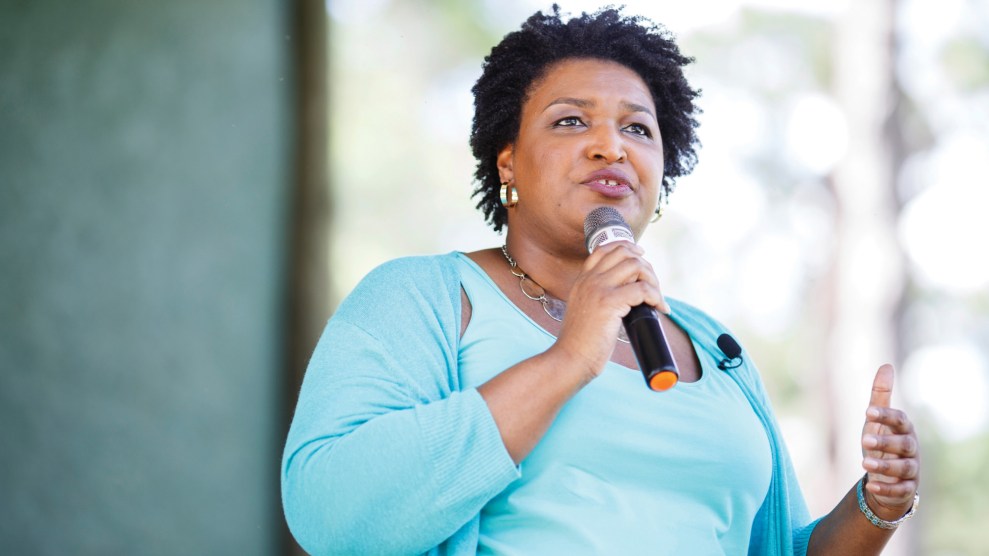 On a warm Friday evening in late February, Stacey Abrams held a fundraiser at Old Lady Gang, a popular Atlanta soul food restaurant owned by Kandi Burruss, the star of The Real Housewives of Atlanta. Abrams is running for governor of Georgia. If she wins, she won’t just be the state’s first black female governor, but the nation’s. Every detail of this evening had been strategically planned to play up Abrams’ appeal to black women.

Nearly all of the hundred or so donors had just come from Power Rising, a conference about black women in politics. The celebrity host was Erika Alexander, an actress and producer best known for her role in the ’90s sitcom Living Single. A who’s who of black women Democratic officeholders had shown up to support Abrams: Rep. Frederica Wilson, the bedazzled-cowboy-hat-wearing Florida congresswoman who chastised President Donald Trump for allegedly telling the widow of a dead soldier that “he knew what he signed up for”; Rep. Gwen Moore, Wisconsin’s first black representative; and Rep. Alma Adams, a veteran lawmaker from North Carolina known for her collection of more than 1,100 church hats.

Abrams is a tall woman with a warm, gap-toothed smile. Taking the stage in a deep purple dress, the 44-year-old dived into a story about the time she was chosen to represent her home state of Mississippi at the Girl Scouts’ national conference in the mid-’80s. “But there were some folks in our Girl Scout troop who were unhappy with me”—a black girl—”being selected,” she said. When she got to the airport, she found out that someone had changed her reservation. “They thought if they left me behind, I’d stay gone.” Instead, she got on her first flight ever and traveled by herself to Arizona. “There are gonna be a lot of people who try to stop you from getting on that plane,” she told the rapt audience. “There are a lot of people organizing themselves to make sure I land at the wrong destination. There are folks who don’t think it’s time for a black woman to be governor of any state, let alone a state in the Deep South. But there’s no wrong time for a black woman to be in charge.”

A prolific author who penned romantic thrillers before she entered politics, Abrams excels at telling stories—particularly tales in which a protagonist encounters an evil, resists the urge to give up, and charges into the unknown. “Faith is difficult,” she says. “That’s why the Bible talks about it so much.” Abrams’ quest to become the first black woman governor is a leap of political faith. While she needs her peers’ support, she also needs to build a coalition of young people, immigrants, and whites—including Republicans who are uncomfortable with Trump’s flirtation with white nationalism. Some have dubbed this the “new Southern strategy.” But to make such an approach work, Abrams must appeal to people who usually don’t vote for candidates who look like her.

Born in 1973, the second of six children, Abrams grew up in Gulfport, Mississippi. Her mother was a school librarian and her father was a shipyard worker. “Mississippi had perfected soul-crushing poverty wrapped in gentility,” she would later write in her memoir and self-help book, Minority Leader: How to Lead from the Outside and Make Real Change, which comes out later this month. When Abrams was in high school, her family moved to Atlanta so her parents could attend divinity school to become Methodist ministers. After graduating as her class valedictorian, she went to Spelman College, the premier historically black college for women.

At Spelman, she struggled to find her footing among the school’s “daughters of accomplishment.” Then, in April 1992, when she was a sophomore, the Rodney King verdict sparked violent protests in black communities across the country, including Atlanta’s West End, home to Spelman, Morehouse, and two other historically black colleges. As the Atlanta police moved in with tear gas against the students and residents of nearby public housing projects, Abrams grew furious at the media’s characterization of the young people in the streets as “angry vandals, rather than complex human beings who had seen in a single verdict an indictment of our humanity,” as she later wrote. She began calling up local TV stations to complain about their coverage. When they kept hanging up on her, she enlisted her dormmates to make calls.

A local TV producer took notice and invited her to participate in a town hall meeting with Maynard Jackson, Atlanta’s first black mayor. At the event, Jackson criticized the young people he said had wreaked havoc on the city. Abrams asked Jackson what he had done for dispossessed youth—a question that challenged the mayor but also impressed him. A few months later, Abrams began work as a research assistant for the mayor’s office of youth services.

Abrams would earn a master’s degree from the University of Texas and a law degree from Yale before returning to Atlanta as a tax attorney. In 2003, at just 29 years old, she was appointed Atlanta’s deputy city attorney. She was elected to the state Assembly in 2006 and became Georgia’s House minority leader in 2010—the first African American to do so.

Abrams is tapping into a moment when Democrats are finally realizing how much they owe to the black women who have long been intensely loyal to the party. In 2012, black women voted at higher rates nationally than any other demographic group. In 2016, 94 percent of them voted for Hillary Clinton. (Less than half of white women did.) And in a fiercely contested special election in Alabama in December 2017, black women supported the Democratic winner, Doug Jones, by a 98-2 margin. After Jones’ slim victory, Democratic National Committee Chair Tom Perez tweeted, “Black women are the backbone of the Democratic Party, and we can’t take that for granted. Period.”

Let me be clear: We won in Alabama and Virginia because #BlackWomen led us to victory. Black women are the backbone of the Democratic Party, and we can’t take that for granted. Period.

But black women’s clout at the ballot box has not translated into representation. Nationwide, only 12 black women have ever been elected to statewide executive positions such as attorney general or lieutenant governor. Research shows that women candidates have to work harder than men to raise money, and black women who run for office face the additional burden of representing areas with less money to pull from. Some feel their fundraising is unfairly scrutinized because they are seen as not raising enough cash—or raising too much. Sarah Bryner, the research director at the Center for Responsive Politics, says black women candidates “face the same kinds of intersectional problems that they face in all sorts of areas—they have difficulty raising money because they’re women and because they’re black.”

Black women candidates “face the same kinds of intersectional problems that they face in all sorts of areas—they have difficulty raising money because they’re women and because they’re black.”

On the one hand, Abrams is quick to tout the significance of being a black woman seeking higher office. But she’s also aware she has to beat her main opponent in the May 22 Democratic primary, Stacey Evans, a white state Assembly member. To do that, she’ll need white voters, and white women in particular, to rally to her side. “I do not disparage anyone based on race. I do not isolate any community based on religion. I want everybody,” Abrams says. “But I am going to focus on progressive voters who run the cross section of racial and economic and regional geography but who share core values that I have.”

Georgia is changing, and Abrams’ campaign is a bet on the future—though it’s not clear if the rainbow coalition she hopes to assemble is in place yet. People of color are predicted to be a minority of Georgia’s eligible voting population until 2036. Trump won the state by 5 percentage points in 2016, and it has been nearly two decades since a Democrat has been elected governor there.

So far, however, Abrams’ burgeoning national profile has helped get her fundraising off to a good start. By the end of March, she had out-fundraised Evans, bringing in nearly $3.3 million. A Democratic donor in San Francisco has said she’ll raise another $2.5 million for Abrams, including shelling out $1 million of her own fortune. Yet Abrams has already burned through $1.8 million, as of last month, opening field offices and building her get-out-the-vote operation, stoking fears about how much cash she has on hand. “Any businessperson will tell you it’s not who has the biggest bank account when you start a business, it’s who gets the most customers,” she says at her campaign headquarters. Whoever wins the primary will likely face Lt. Gov. Casey Cagle, a Republican who made headlines when he got the state to revoke a tax benefit for Delta Air Lines, a major employer, after it announced it would cancel its discounts for National Rifle Association members. He has already raised nearly $6.8 million.

Back at Old Lady Gang, Abrams told the room of supportive black women another war story. In 2014, she recalled, 800,000 eligible Georgians weren’t registered to vote—a group equal to the population of South Dakota. Three-fourths were black. Abrams took action, registering 200,000 people of color in less than three years through her $7 million New Georgia Project. “But I’ll tell you a dirty little secret: Some of the folks who fought against me looked like the folks in this room,” she said, seeming to refer to the former Atlanta mayor and other black politicians who questioned the need for her project and challenged her financial transparency. But she persevered.

Abrams then pulled back to make her broader pitch. After traveling to 155 of Georgia’s 159 counties and talking to voters who don’t look anything like her—”my hair’s a little different and I’m a little taller”—Abrams said she is more certain than ever that her job is not politics, but service. “I grew up working poor in Mississippi. And I’ll tell you this: I’ve never met a poor person who hates rich people. We hate being poor.” The crowd erupted in cheers as Abrams explained that Georgia needs a governor who understands the difference. “It’s not about begrudging anyone else. It’s about wanting something for yourself, and being willing to work for it if the systems will work with you and not against you.”