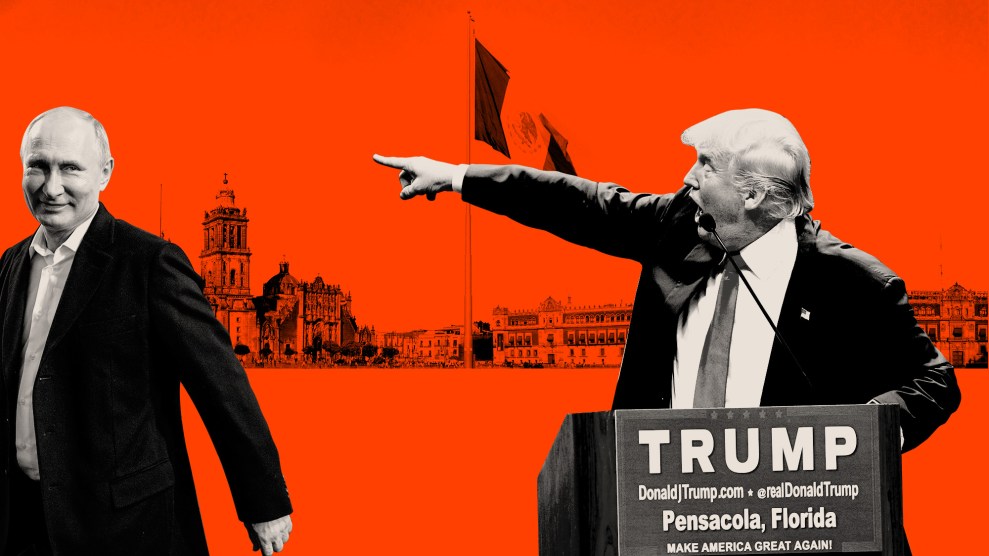 Roughly a year after Donald Trump’s upset White House victory, Shannon O’Neil, a Latin America expert at the Council on Foreign Relations, wrote a column warning that Russia may not be done meddling in North America’s elections.

A month later, Trump’s then National Security Adviser H.R. McMaster seemingly confirmed O’Neil’s warnings. In a December 2017 speech, McMaster reeled off a list of places where the Russian government has been accused of electoral meddling—Catalonia, England, and France—before drawing attention to our southern neighbor.

“You see initial signs of it in the Mexican presidential campaign already,” McMaster said.

“When it comes from Uncle Sam, any statement on this isn’t trusted.”

Yet today, two weeks into the official campaign, there’s scant evidence of Russian interference according to a variety of experts on Mexican politics, cybersecurity, and international security, both inside and outside of the country. The Mexican government has itself denied such claims, and, for what it’s worth, so has the Russian government. A spokesperson for the National Security Council declined to elaborate on McMaster’s comments or provide details about any information or intelligence behind them.

“A lot of the messaging around this is ‘Watch this space and see what may develop,'” he says, “versus really a concrete case that it’s happening.”Jorge Buendia, a pollster in Mexico City who runs the Buendia Laredo polling firm, tells me that in the month’s since McMaster’s warning, he hasn’t seen or heard of anything that would suggest Russian interference. Dan Erikson, a Latin America expert who worked in the Obama State Department and White House says he hasn’t seen anything either.

“Here, the company who is trying to modify the electoral attitudes of the people is Facebook and Cambridge Analytica, not the Russians,” says Raúl Benitez Manaut, a professor of international security at the National Autonomous University of Mexico (UNAM). “Facebook came from California, not from Moscow.”

As noted by Verificado, a coalition of  organizations working to identify false news in real time in the Mexican election, “Russian interference is—for the moment—just a possibility, not a fact.”

That’s not to say the conditions aren’t ripe in Mexico for a 2016-style foreign intervention, especially by a country seeking to complicate American foreign policy. Andrés Manuel López Obrador, a populist candidate whose positions on economic and foreign policy might cause stress in Washington, is leading in the polls. The current ruling party’s candidate, José Antonio Meade, is trying to distance himself from the party’s long history of corruption and has slipped into third place. Ricardo Anaya, the candidate for a coalition of left and right parties, currently polls second.

Mexico was ruled by one party for most of the twentieth century, and allegations of ballot box fraud are common. López Obrador, known commonly as “AMLO,” has voiced such complaints himself, especially after his narrow loss in 2006’s presidential election. In the last presidential election in 2012, the ruling party faced accusations it employed a legion of Twitter trolls to push its message.

A Washington Post piece argued that López Obrador was being boosted by Russia through RT.

López Obrador’s political rivals, including those aligned with the PRI, have long worked to paint him as a leftist populist in the mold of Venezuela’s late Hugo Chavez and as a danger to Mexican democracy and stability. Rumors about Russia have begun to meld with such past attacks.

In Mexico, clips of McMaster’s December comments went viral, according to Maxim Trudolyubov, a veteran journalist based at the Kennan Institute who tracks Russian influence. Mexican social media erupted with memes linking AMLO to Russians or Soviets. The candidate responded by laughing off the accusations, joking in a January tweet that he should be called “Andrés Manuelovich,” and posting a video where he looks at the Atlantic Ocean and says he’s waiting for a Russian submarine to bring “gold from Moscow.”

A trio of US senators—Marco Rubio (R-Fla.), Bob Menendez (D-N.J.), and Tim Kaine, (D-Va.)—cited McMaster’s December comments along with unnamed “recent news articles” in a letter they sent then-Secretary of State Rex Tillerson ahead of his February trip to Mexico urging him to “raise the importance of strong, independent electoral systems.” The senators’ offices declined or did not respond to requests to disclose what information motivated their letter.

Jose Luis Valdés Ugalde, a UNAM professor of political science and international affairs, notes that Mexicans are accustomed to US interventions in Central American and in their country. He says that members of the Mexican media and others have reached out about potential Russian involvement and “asked me in private and in public whether this is possible.” He says that many Mexicans seem to have taken McMaster’s accusations about Russian involvement with “a sense of humor” because “when it comes from Uncle Sam, any statement on this isn’t trusted.”

One of the reasons that warnings about Russian interference in Mexico have arisen, even if they are unsubstantiated, is that the race—featuring an anti-establishment candidate with a chance to win who reflects domestic political fissures and seeks to upset conventional foreign policy­—fits a pattern familiar to those who have observed Russian meddling operations in the US in 2016, and in France and the Netherlands in 2017.

As the campaign officially began on April 1, López Obrador held a healthy polling lead. If he were to win the July 1 elections, some say he would complicate the relationship between Mexico and the US. He’s been critical of NAFTA, just as Trump has been, and has presented himself as standing up for his people and country against a man many Mexicans see as another American bully president. López Obrador has also talked about reworking landmark 2013 energy reforms that opened up the nation’s oil markets to foreign companies.

The presence in Mexico of Cambridge Analytica also echoes the United States’ 2016 presidential election. The political data firm claims to have been instrumental in Trump’s upset victory and is partly owned by hedge fund billionaire Robert Mercer, one of Trump’s biggest boosters. After the Wall Street Journal reported in October that its CEO had approached WikiLeaks with an offer to “help [organize] the Hillary Clinton-related emails the website was releasing,” the Daily Beast reported the firm was being scrutinized by at least one congressional investigation into possible collusion between Trump associates and Russia’s 2016 influence operation. Its CEO left the company in April after its sales operations were the target of a hidden camera investigation.

Last fall, BuzzFeed reported that people claiming to work for Cambridge were recruiting potential staffers for a variety of Mexican state and national campaigns. A more recent story by El Financiero, a financial news outlet, reported that it was unclear what the company was doing in Mexico, but that it had not properly registered itself with the Mexican government to participate in the elections, as required of any contractor working with or on behalf of political campaigns. As of March 12, the company still hadn’t filed any official paperwork. Cambridge Analytica issued a statement to El Financiero denying it was operating in Mexico.

“True or false, this is going to effect the image of López Obrador.”

In a Washington Post piece published earlier this year, columnist Frida Ghitis argued that López Obrador, whom she described as “a leftist nationalist,” was being boosted by Russia through RT. Ghitis noted that the channel had “started giving vast amounts of time to AMLO’s main English-language spokesman, John Ackerman,” and pointed out that the candidate has said that Ackerman’s wife, Irma Eréndira Sandoval, would join his cabinet if he were to win the presidency.

Ackerman quickly denied being a spokesman for López Obrador, and attacked Ghitis’s column and the notion of Russian intervention in the election as “fabricated, fake news” and “pure fantasy.” Ackerman told Mother Jones that the attacks on him and his wife are part of a broader disinformation campaign coordinated by the current ruling party to delegitimize AMLO. No matter who may benefit from pointing out the connection, Ackerman’s links to RT and to Obrador’s inner circle (via his wife), seem to be the only pieces of public evidence fueling any allegations about Russian support for AMLO.

Another column published in the Washingon Post in January argued that López Obrador’s attempts to dismiss the allegations of Russian interference with jokes are not enough.Mike Carpenter, a former foreign policy adviser to Vice President Joe Biden and a former deputy assistant secretary of defense and national security council expert on Russia, has closely monitored Russian activity in European elections. He thinks Ackerman’s presence on RT indicates that Russia is engaged in an influence campaign in Mexico. “It’s pretty clear to me that that’s what they’re doing,” Carpenter says.

“If only it were a laughing matter,” wrote León Krauze, a Los Angeles-based Mexican journalist. “López Obrador needs to get serious and sort out a potential conflict of interest within his team before shrugging off any suspicion of Russian influence in his campaign and, crucially, his now likely future government,” he wrote, referring to Ackerman and his wife.

“Either true or false, this is going to effect the image of López Obrador,” he says. “The rumor is already here, and it’s really difficult now to escape from it.”