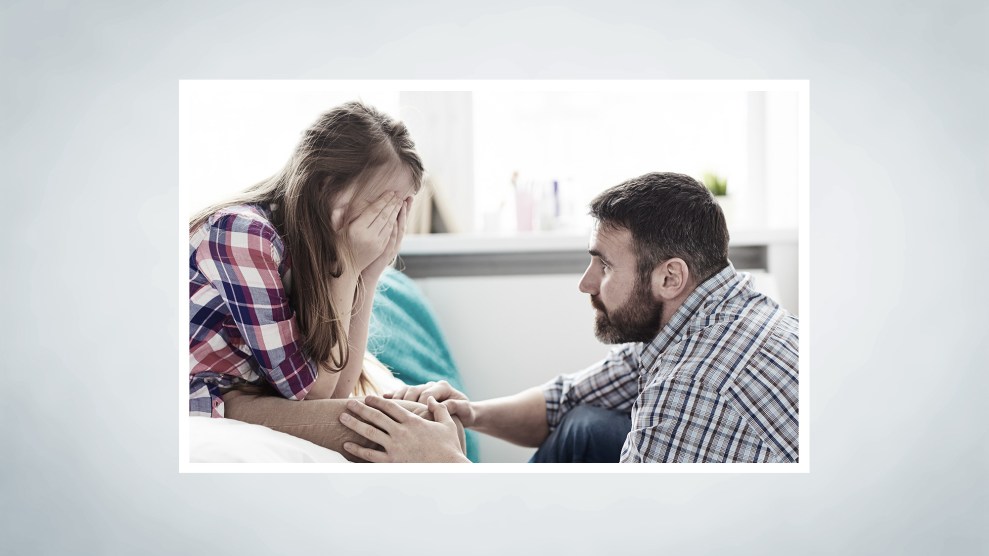 Imagine, for a moment, that you are lying inside an MRI scanner. A giant plastic cylinder surrounds your head and shoulders, and the unit’s interior wall is inches from your nose. “Stay perfectly still,” a technician says. There’s a loud whirring and knocking of parts as the machine shifts position and then, suddenly, another voice comes through your earpiece. It’s your mother. She’s talking about you, about choices you’ve made that you know she disapproves of. Harvard psychology professor Jill Hooley created this scenario to study how parental criticism affects our mental health. Her team, with permission, had called the moms of study participants and pre-recorded their critical commentaries.

There’s something about a parent’s disapproval that’s instinctively repellent. It may even be bad for your health.

During the five years I spent reporting for a new book on the science of discipline, my sources reliably cringed when I told them about Hooley’s experiment. There’s something about a parent’s disapproval that’s instinctively repellent. It may even be bad for your health. A growing body of scientific work suggests that criticism from our loved ones can bring latent mental illnesses to the surface and make it harder for people to recover from stints of depression, schizophrenia, and other crippling brain conditions. For parents grappling with how to discipline difficult children, the implications are profound—and sometimes profoundly frustrating.

The first evidence linking parental criticism with mental illness came to light in the late 1950s in London’s Camberwell district. A sociologist named George Brown was curious why schizophrenia patients were so rarely successful in re-entering society after long-term hospitalization. To his surprise, patients who moved back home with a spouse or a parent fared worse than those who resided with strangers. They were more likely to start hearing voices again, to experience delusions or act aggressively. Intrigued, Brown set out to study the role of family relationships in recovery from schizophrenia. As his researchers interviewed more patients and families, a pattern began to emerge. Patients living with a critical, hostile, or overly involved parent or spouse did poorly. Those living with a more supportive family, or in a boardinghouse, did much better.

Other researchers followed up on Brown’s findings, eventually developing a standard measure that is still in use. People are asked to rate, on a scale of 1 to 10, their sensitivity to criticism from their spouse or closest relative. This number, it turns out, aligns remarkably well with a person’s mental health and overall well-being: For people with mental illness, a score of 6 or greater indicates a high risk of psychiatric relapse, whereas 2 or 3 is favorable for recovery—the mere presence of a critical family member can spike a patients’ blood pressure, one study showed, whereas having a non-critical relative around helps people self-regulate. Researchers have seen similar results over the years for people with depression, bipolar disorder, anxiety, post-traumatic stress disorder, eating disorders, and substance abuse problems.

The vexing part is that even if a parent doesn’t mean to be critical, a depressive child’s brain may hear it that way.

Hooley wanted to take the observational approach to the next level. Functional magnetic resonance imaging (fMRI), she realized, would let her observe directly how the brain responds to parental criticism, so she recruited people 20 to 30 years old with a history of depression who had been stable for at least six months prior. When the subjects heard those critical recordings of their mothers (for whatever reason, most of the studies involve maternal criticism), their brains snapped back into a depressive state: The regions that process emotions went offline and activity increased in the amygdala, suggesting a fight-or-flight response. Neither the control group (people with no history of depression) nor depressive young people exposed to maternal praise had this reaction.

The vexing part is that even if a parent doesn’t mean to be critical, a depressive child’s brain may hear it that way. People prone to mental illness have difficulty managing and responding to negative comments—it’s as if those comments were stickier. (Behavioral researchers are just beginning to explore whether criticism conditions our brains to be more prone to depression in the first place.) “One take-home message is that we need to be attentive to some of the consequences that criticism can have, even though it doesn’t seem very harsh to us,” Hooley says. “It’s not that these are bad relatives and they’re mean—they’re trying their very best.”

So what’s a parent to do? Spanking is out, based on reams of evidence linking the corporal punishment of children to aggressive, abusive, and even criminal behavior in adults. We’re not supposed to yell at our kid, either. Harsh verbal discipline (shouting, cursing, humiliating a child) is associated with an elevated risk of depression, aggression, and substance abuse, increasing a child’s likelihood of alcohol abuse, for example, by more than tenfold. Even timeouts can be problematic. “We’ve found that time-outs are often used in a reactive and punitive manner that leaves children feeling more reactive and dysregulated,” writes Dan Siegel, a professor of clinical psychology at the UCLA School of Medicine.

Must we now treat our little monster like a fragile snowflake?

A study of more than 10,000 American kids found that half had developed some kind of mood disorder, behavioral disorder, or addiction by age 18.

Not exactly. Parental criticism is both inevitable and necessary—it’s vital to helping a child learn to navigate the world. The tricky thing is that criticism can be uniquely problematic for the very kids whose behavior seems to warrant it the most. These are common conditions: In a 2016 survey by the National Institute of Mental Health, nearly 13 percent of adolescents reported having at least one major depressive episode that year. An earlier study of more than 10,000 American children found that fully half had developed some kind of mood disorder, behavioral disorder, or addiction by age 18. Simply playing the odds, a parent would be wise to dial back on the disapproval.

The salvation for adults who want to raise kids with limits, who aspire to be their children’s protectors and not their coddlers, may lie in the very latest science. Conditions such as depression, anxiety, and attention deficit disorder stem from our inability to properly manage thoughts, emotions, and behavior. These are learned abilities, and the way children learn to self-regulate, recent studies suggest, is through connection, empathy, physical touch, and simply being near their parents. This is where we adults can get smarter about discipline.

In one memorable 2012 experiment, researchers from the laboratory of University of Pittsburgh neuroscientist Greg Siegle were using an fMRI study to observe changes in the brains of kids diagnosed with anxiety disorders. Some of the children, who were around 10 years old, wanted their mothers standing next to them while they were in the machine. This is typically allowed. But one of Siegle’s graduate students was worried it might sway the results.

She was spot-on. The anxious children placed in the scanner by themselves showed heightened activity in the parts of the brain that integrate emotional and physiological reactions to fear and stress. But remarkably, when mom was close at hand, that activity disappeared—the anxious kids’ brains looked just like those of the non-anxious kids. “It was absolutely an accidental finding,” Siegle told me. “When we have another person with us, especially touching us, it seems to do a lot to regulate our emotional reactivity.”

By establishing an empathetic connection in times of stress, an adult can stimulate growth in the parts of a child’s brain that govern the child’s emotional regulation.

Because neurons wire and rewire themselves very rapidly when we are young, Siegle’s results, supported by numerous follow-up studies, suggest that an adult, by establishing a connection with a child at a moment of stress or conflict, can actually stimulate development in the parts of the child’s brain that control emotional regulation. This intervention might consist of a gentle hand or a loving hug after you separate your tantruming toddler from the Cap’n Crunch in the cereal aisle. With an incensed teenager, it might be as simple (or challenging) as keeping your cool, refusing to lock horns, and expressing empathy for the teen while gently but firmly enforcing a family rule on screens or curfews. We can’t control how the kid will respond, but at least we can regulate our own behavior.

So that’s the choice, basically: Either scold and lecture and dispense timeouts, or take actions that reinforce the parent-child relationship and help the kid pull it together—and then later, when things cool off, work with the child on a plan to deal with their behavior. A tantruming toddler may agree to address feelings of frustration by doing jumping jacks, finding a cozy corner, or hitting a pillow with all their might. With the teen, maybe it’s a matter of negotiating the steps they can take to regain trust and earn back the iPhone or late-night privileges.

This can be a difficult process, full of of trial and error. It will take time, consideration, and more than a little patience. You, too, will relapse. But if you’re committed to raising a resilient and capable adult, the science is increasingly clear. These days, when I walk into my living room to find the young ones carelessly dripping chocolate ice cream all over the sofa, I try to check the tirade rising in my throat. I think about all the research I’ve read, take a couple of deep breaths, and then set myself to the worthwhile task of teaching my offspring.

This article is adapted, in part, from Katherine Reynolds Lewis’s new book, The Good News About Bad Behavior: Why Kids Are Less Disciplined Than Ever—and What to Do About It, out April 17 from PublicAffairs.