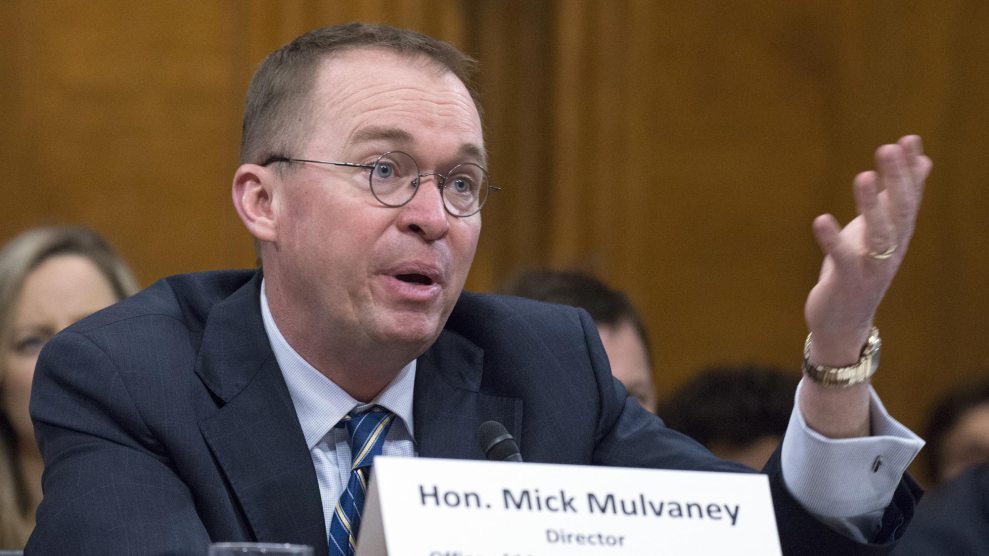 Before joining the Trump administration, White House budget director Mick Mulvaney made no secret of his dislike for the Consumer Financial Protection Bureau (CFPB), the agency created in the wake of the 2008 financial crisis to better supervise Wall Street.

As a congressman, Mulvaney proposed legislation to eliminate the bureau, calling it a “sick, sad” joke. Now as the Trump-appointed interim head of the agency, Mulvaney on Monday presented his first report to Congress on the work of the bureau, recommending four major changes to the CFPB’s structure, funding, and oversight, that would vastly weaken the consumer watchdog.

The report offers yet more evidence that Mulvaney is capitalizing on his temporary position atop the CFPB to bring years of proposals to undermine the agency to life.

“The bureau is far too powerful, and with precious little oversight of its activities,” Mulvaney writes in a blistering introduction. Mulvaney then cites the Federalist Papers, quoting James Madison on how overly powerful bureaucracies meet “the very definition of tyranny.”

While there are in fact many checks on the CFPB’s activity across all three branches of government,  Mulvaney calls the CFPB’s current structure “a warning sign that a lapse in democratic structure and republican principles has occurred.”

Mulvaney makes a number of major policy recommendations in the report. While the CFPB is currently funded through a special appropriation from the Federal Reserve, Mulvaney suggests it instead be funded through the regular congressional budget process. The move would give Congress, and accordingly, whichever political party is in the majority, far more control over the bureau. He also asks Congress to pass a law requiring legislative approval of any CFPB rules. Since its inception in 2011, the CFPB has passed a number of rules aimed at curbing abusive practices by financial institutions, including new limits on payday lenders that are popular with consumers, and rules that helped the CFPB undertake enforcement efforts that have recovered millions of dollars on behalf of hundreds of thousands of consumers.

In a move that is likely related to the controversy surrounding Mulvaney’s own appointment this fall, the report also suggests Congress enact a law clarifying that the CFPB’s director must answer directly to the president. When the Obama-appointed CFPB director Richard Cordray stepped down from his post in November, Cordray, citing the 2010 law that established the bureau, appointed an interim director to succeed him. The Trump administration argued that, under a different federal law, Trump had the right to install his own interim director. A district court initially ruled in Trump’s favor, installing Mulvaney, but the battle is still winding through the courts.

Mulvaney also advises that Congress create an independent inspector general dedicated to overseeing the CFPB. Debbie Goldstein of the Center for Responsible Lending, a financial services watchdog group, calls the suggestion “a red herring” given that the CFPB is already overseen by an inspector general that also monitors the Federal Reserve’s Board of Governors.

“The Consumer Financial Protection Bureau was established as an independent agency in order to buttress it from the enormous political pressures of the banking lobby,” said Goldstein in an emailed statement. “Mulvaney’s proposed changes would make consumer protection dependent on Congress and the White House standing up to the financial industry.”

The rest of Mulvaney’s CFPB report details the bureau’s work towards its enforcement and supervision missions. Most of the actions described took place from April through September 2017—when Cordray was still in charge.