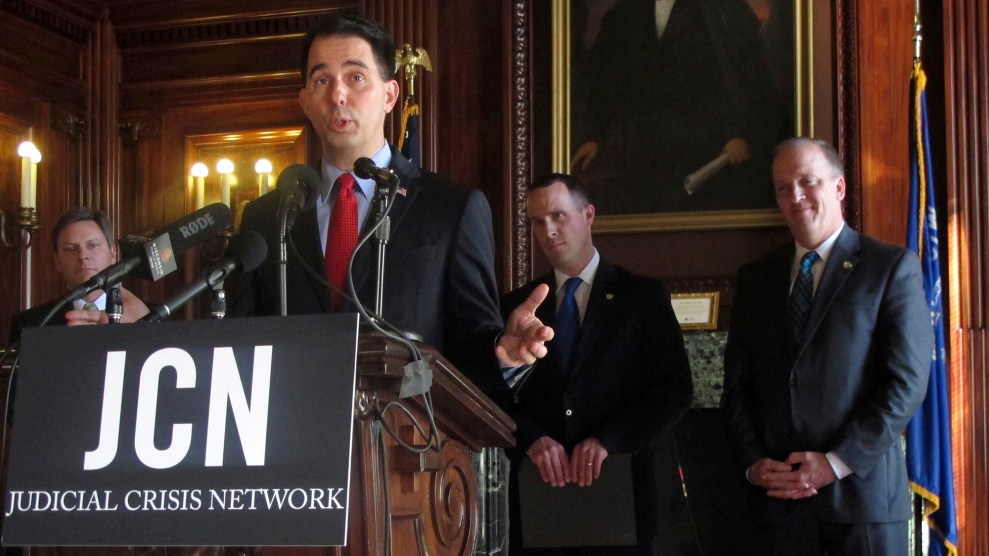 Election officials and Democrats in Wisconsin have repeatedly argued that the state’s strict voter ID law allowed Donald Trump to win the state in 2016 by keeping thousands of voters—predominantly in Democratic-leaning areas—from the polls. Now a top Republican official in the state is saying the same thing.

“We battled to get voter ID on the ballot for the November ’16 election,” Wisconsin Attorney General Brad Schimel, who defended the law in court, told conservative radio host Vicki McKenna on April 12. “How many of your listeners really honestly are sure that Sen. [Ron] Johnson was going to win reelection or President Trump was going to win Wisconsin if we didn’t have voter ID to keep Wisconsin’s elections clean and honest and have integrity?”

The law, which went into effect in 2016, required specific forms of government-issued photo identification to vote. In a cover story last year, Mother Jones reported that the law kept tens of thousands of eligible voters from the polls and likely tipped the state to Trump. A federal court found in 2014 that 9 percent of registered voters in Wisconsin did not possess the identification necessary to vote. In a University of Wisconsin study published in September 2017, 1 in 10 registered voters in Milwaukee County and Madison’s Dane County who did not cast a ballot in 2016 cited the voter ID law as a reason why. That meant that up to 23,000 voters in the two heavily Democratic counties—and as many as 45,000 voters statewide—didn’t vote because of the voter ID law. Trump won the state by 22,000 votes.

African Americans, who favored Hillary Clinton over Trump by an 88-to-8 margin, were three times as likely as whites to say they were deterred from voting by the law.

Indeed, turnout fell most sharply in black neighborhoods of Milwaukee that heavily supported Clinton. Nearly 41,000 fewer people in the city—where Clinton received 77 percent of the vote to Trump’s 18—voted in 2016 than in 2012.

Neil Albrecht, the executive director of the Milwaukee Election Commission, told me the voter ID law made the difference in the state. “It is very probable that between the photo ID law and the changes to voter registration, enough people were prevented from voting to have changed the outcome of the presidential election in Wisconsin,” he said.

Schimel is not the first top Republican official in Wisconsin to admit that the voter ID law affected the outcome of the election. In April 2016, Rep. Glenn Grothman, representing the eastern part of the state, was asked by a local TV news reporter why he was confident that a Republican presidential candidate would win Wisconsin in November. He responded, “I think Hillary Clinton is about the weakest candidate the Democrats have ever put up, and now we have photo ID, and I think photo ID is going to make a little bit of a difference as well.”

Though Schimel said the law would “keep Wisconsin’s elections clean and honest,” the state didn’t present a single case of voter impersonation in court that the law would have stopped. The law remains in effect for the 2018 elections and could once again boost Republicans running for reelection, including Schimel and Wisconsin Gov. Scott Walker.