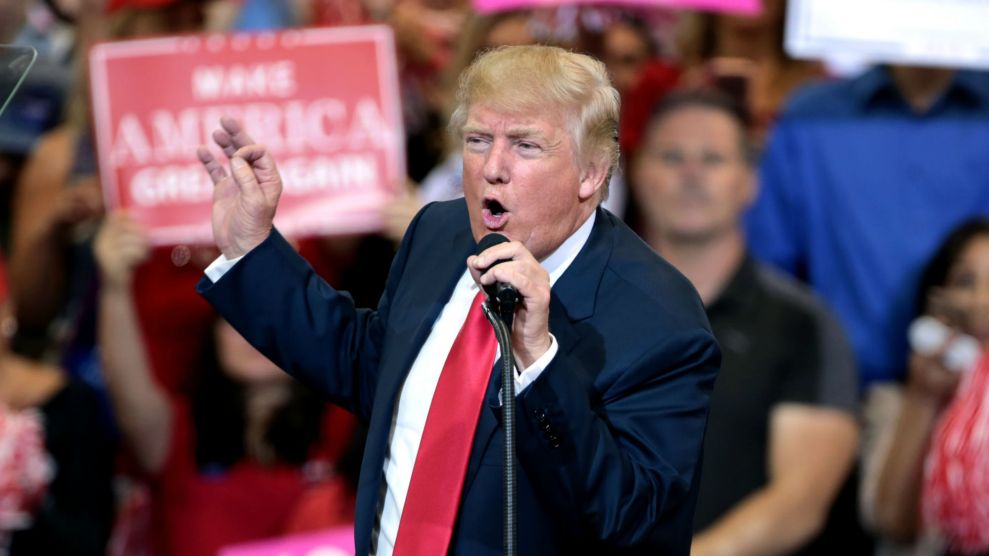 President Donald Trump’s Twitter tirade against former FBI Director James Comey continued apace Monday morning. Trump accused Comey, who has just begun a major promotional tour for his new book, A Higher Loyalty, of lying to Congress about his handling of the FBI’s probe into Hillary Clinton’s email server. In the same 8:25 a.m. tweet, Trump also said that Comey, former FBI Deputy Director Andrew McCabe, and “the others” had “committed many crimes.” (Who he meant by “the others” was unclear.)

Comey drafted the Crooked Hillary exoneration long before he talked to her (lied in Congress to Senator G), then based his decisions on her poll numbers. Disgruntled, he, McCabe, and the others, committed many crimes!

This was just the latest in a stream of ill-tempered tweets from the president targeting Comey. On Sunday, he branded Comey a “slimeball,” “not smart,” the “WORST” FBI chief in history, and a “self serving” liar. He also threatened Comey with jail time.

In his new book, Comey is equally critical, though far more coherent, on the subject of Trump. “This president is unethical, and untethered to truth and institutional values,” he writes. “His leadership is transactional, ego driven, and about personal loyalty.” Comey compares his interactions with Trump to his days prosecuting organized crime leaders: “As I found myself thrust into the Trump orbit, I once again was having flashbacks to my earlier career as a prosecutor against the Mob. The silent circle of assent. The boss in complete control. The loyalty oaths. The us-versus-them worldview. The lying about all things.”

Trump’s mention on Monday of “Crooked Hillary”—his long-preferred sobriquet for Hillary Clinton—is no doubt a reference to the debate swirling around Comey’s depiction in his book of how he handled the investigation into Clinton’s email server. Trump’s Monday morning tweet suggests that Comey was in cahoots with Clinton and wanted to absolve her of any wrongdoing before the FBI’s investigation was concluded.

Comey, in his own telling, says he likely treated Clinton more harshly because the polls showed that she was likely to win the presidential election. Asked by ABC News’ George Stephanopoulos about his decision to announce that the FBI had restarted its investigation into Clinton’s email server days before the election, Comey said: “I was operating in a world where Hillary Clinton was going to beat Donald Trump. I’m sure that it was a factor. I don’t remember spelling it out, but it had to have been. That she’s going to be elected president, and if I hide this from the American people, she’ll be illegitimate the moment she’s elected, the moment this comes out.”