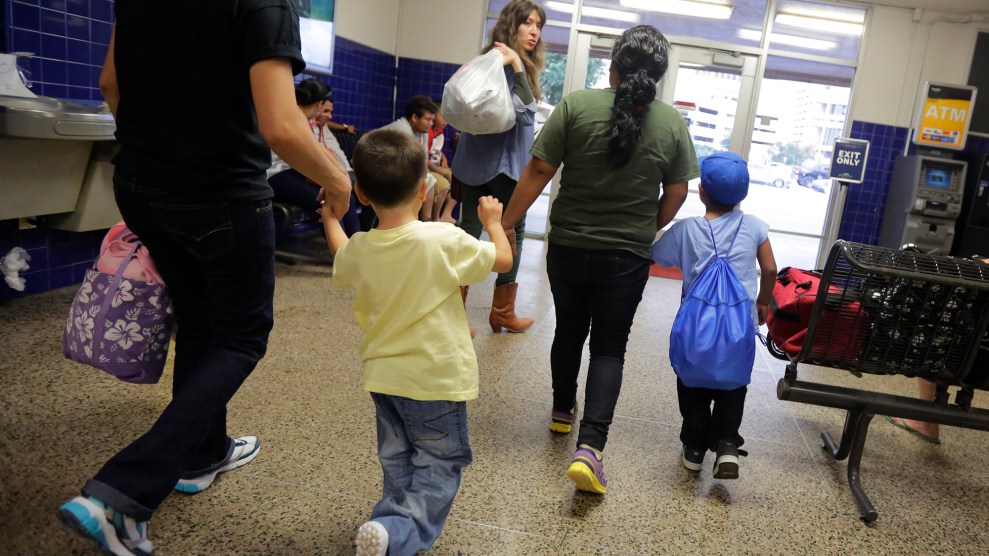 In this July 7, 2015, file photo, immigrants from El Salvador are seen after their release from a family detention center in San Antonio, Texas. Eric Gay/AP

Though the Trump administration has claimed its immigration agents do not often separate families at the border, new data reveals that hundreds of kids have been taken from their parents while attempting to cross into the United States in recent months.

An analysis by the New York Times found that since October, more than 700 children, including more than 100 younger than 4, have been removed from adults they were accompanying at the border. The data comes from the Office of Refugee Resettlement, which assumes custody of kids who are separated from their immigrant parents. Three federal officials familiar with the cases confirmed the numbers.

In March, John Kelly, then the secretary of homeland security, said his department was considering splitting up families at the southwest border as a way to deter migrants from bringing minors on the dangerous journey through Mexico to ease their own entrance into the United States. Department of Homeland Security officials, who say the proposal was never put into practice, have not previously shared data on family separations but have indicated the numbers were fairly low.

In response to the Times, the Department of Homeland Security initially denied that the number of kids who had been pulled from their parents was that high and added that separations were not used to deter migration. “As required by law, D.H.S. must protect the best interests of minor children crossing our borders, and occasionally this results in separating children from an adult they are traveling with if we cannot ascertain the parental relationship, or if we think the child is otherwise in danger,” a spokesman told the Times. Eventually, the Department of Health and Human Services, which oversees the Office of Refugee Resettlement, issued a statement to the Times that acknowledged there were “approximately 700” such children separated from adults since October.

The Border Patrol says fraud at the border is on the rise, and that a growing number of migrants are attempting to enter the country with children who are not their own. Immigrants who show up at the border with minors are often released more quickly because of limits on the amount of time kids can be detained, the Times reports.

When immigrant children are pulled from adults, they are often handed over to shelters run by nongovernmental organizations, where they may stay for long periods of time if no other guardian can come get them. The Times, citing an unnamed Border Patrol official, reports there is no concrete process in place to help parents regain custody.

Read the full Times story here, and check out my colleague Ian Gordan’s reporting on kids at the border here.