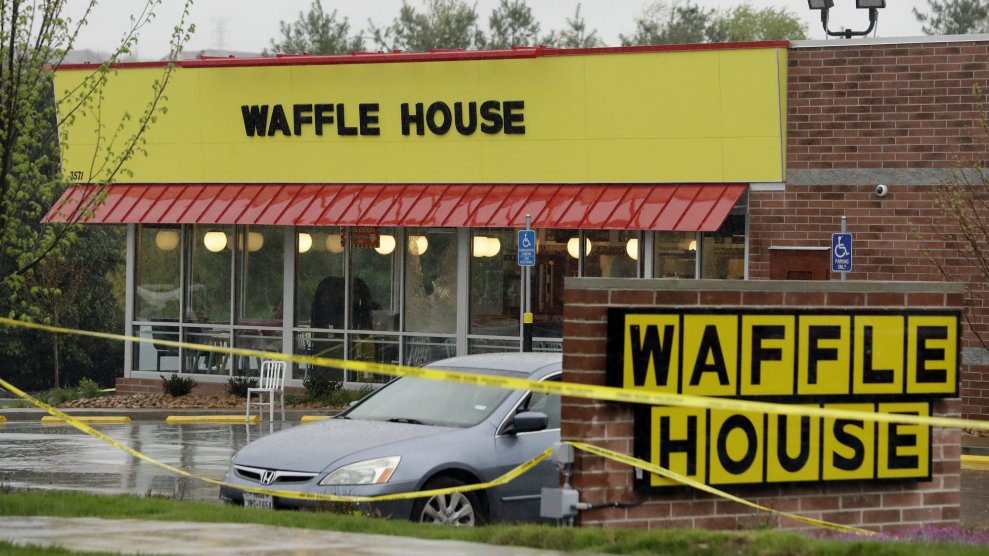 Last August—eight months before Travis Reinking allegedly killed four people and wounded four others at a Tennessee Waffle House—Illinois law enforcement came to take away his guns. The then-28-year-old had a history of mental health issues and run-ins with the local sheriff’s office. About two weeks earlier, the US Secret Service had arrested Reinking for entering a restricted area near the White House.

Reinking surrendered four firearms: an AR-15, a 9mm handgun, and two hunting rifles. His firearm owner’s identification card was also revoked. (In Illinois, most people need this card to legally own a gun.)

“We need laws to very clearly lay out the procedures for removing guns and how the guns are going to be stored.”

The officers took the weapons from Reinking—but then they immediately gave them to his father, Jeffrey Reinking, who has a valid firearm owner’s card, the Tennessean reported. The father “was advised that he needed to keep the weapons secure and away from Travis,” and he “stated he would comply,” according to a Tazewell County Sheriff’s Office report from the time quoted by the Tennessean. That fall, Travis Reinking moved to Tennessee.

Early Sunday morning at a Waffle House in Antioch, Tennessee, Travis Reinking allegedly opened fire with the AR-15 he had surrendered less than a year before. Four people were killed and four others were injured. An unarmed patron wrestled the semi-automatic rifle away from the shooter, who fled on foot. Police took Travis Reinking into custody on Monday afternoon.

Jeffrey Reinking admitted to local law enforcement that before the shooting, he had given the confiscated guns back to his son. It’s unclear whether the transfer took place in Illinois or Tennessee (or somewhere else), which could have implications for whether Jeffrey Reinking violated the law.

On Monday, I spoke with Lindsay Nichols, federal policy director at Giffords Law Center to Prevent Gun Violence, about the Illinois law that allowed police to remove Travis Reinking’s weapons—and that allowed them to turn over those same weapons to Reinking’s father. Here’s our conversation, lightly edited for length for clarity.

Mother Jones: Why were Travis Reinking’s guns taken away? Why were they then given to his father?

LN: Illinois has gun laws that are relatively stronger than the majority of gun laws in the country. The state requires a person who has a gun to generally have a license called a firearm owner’s identification card (FOID card). It has a process for removing guns when a person loses the eligibility to possess them. Most states have really no process for this. Illinois’ law is also stronger in that there is a way for a law enforcement officer—in this case it was FBI—to say this is someone who should not have a gun.

The FBI person told the state police that [Travis Reinking] was someone who should not have a gun under the Illinois clear and present danger law. This law was enacted in 2013 after Sandy Hook, and it allows law enforcement officers to make those reports and have someone’s gun eligibility taken away. That imposes a certain responsibility on state police to revoke the person’s FOID card and send a revocation notice to the person, who usually has to surrender the FOID card and fill out a form saying how they are disposing of their guns. In many of these cases, a law enforcement officer will go out to the person’s house and make an effort to make sure the person’s guns are removed. That’s what happened here.

MJ: In these situations, can the police take guns away and simply hold onto them themselves?

LN: They can seize them. There is some question about the reluctance of law enforcement to store guns that belong to the public. It is a responsibility that some law enforcement agencies are reluctant to do, because it is property that belongs to a member of the public. Because of that reluctance, we need laws to very clearly lay out the procedures for removing guns and how the guns are going to be stored.

We are working towards that. You may have heard of extreme risk protection orders. In those bills [also known as “red flag laws“], there is very clear language stating that the law enforcement agency must store the guns and that they can only return them under specific circumstances. They may seem tedious to talk about, but they are very important parts of the law that need to be included because of situations like this—because of situations where [law enforcement officials think]: “Oh, it would be so much easier if a family member would just hold onto it for him, during this period where he is ineligible to possess a gun. We’ll just let them do it.”

That has all sorts of dangers. The possibility that a disqualified person is going to get their guns back by persuasion, or coercion, or stealing is really great. The best approach is to have law enforcement hold onto those guns.

MJ: Does this transfer of confiscated weapons happen often?

LN: This an area where there is a lot of variation. There are probably 10 or 15 states that have some provision that says something along the lines of, “You have to surrender your guns.” Hardly any of them really specify how or to whom. There is a larger number of states who address this issue specifically with regard to domestic violence protective orders. That’s a policy based on the extreme danger that often exists in these domestic violence situations.

But only a few states have expanded that, or set up procedures to address the issue: When people lose their eligibility to possess a gun, how do we make sure that they no longer have guns or that they surrender the guns they own?

MJ: Was it legal for Jeffrey Reinking to give the guns back to his son?

LN: It seems from the facts that we know about here that the father did violate the law [if the transfer took place in Illinois]. There is a law in Illinois that very explicitly says it’s illegal to knowingly transfer a gun to a person who does not have a FOID card.

MJ: Once he moved to Tennessee, could Travis Reinking have been eligible under state law to own a gun?

LN: It seems very likely to me that Tennessee laws would not have prohibited him from owning guns. Tennessee does not have a clear and present danger-type law. Generally in Tennessee, unless someone was convicted of a crime or was committed to a mental institution, which I don’t think he was, he would have been eligible to posses a gun in Tennessee.