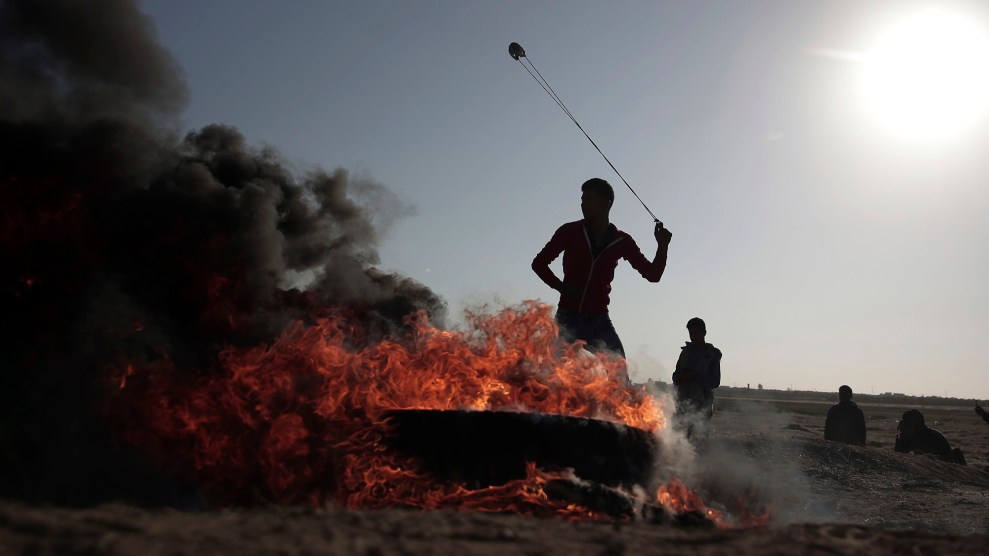 A Palestinian protester hurls stones toward Israeli soldiers during a protest near the Gaza Strip border with Israel, in eastern Gaza City, Saturday, March 31, 2018.Khalil Hamra/AP

The Israeli military says it will target more Palestinians in Gaza if violence along the border between the territory and Israel continues, according to a Saturday report from the New York Times. That comes a day after 15 Palestinians were killed by live fire from the Israeli military during what was supposed to be a peaceful protest along the border, making it the “bloodiest day” in Gaza since 2014. But what led up to this weekend’s deadly clashes?

As many as 30,000 Palestinians had gathered at five different points along the border between Gaza and Israel starting Friday as part of the “March of Return,” protests timed for the anniversary of Land Day, when, in 1976, six Israeli Arabs were killed by security forces while protesting the occupation of land in northern Israel that was taken in order to build Jewish communities, according to Haaretz. The paper reports that the protesters are backed by Hamas, the ruling party in Gaza, and plan to have thousands camp at spots along the border in tents until mid-May, with weekly demonstrations on Fridays.

The majority of those who came out for the marches were peaceful, but some were apparently close to the fence and threw rocks and fire bombs toward Israeli military positions. The military responded by declaring areas around the fence a closed zone, and subsequently firing live ammunition at the protesters, along with rubber-tipped bullets and tear gas. The Palestinian Health Ministry reported more than 1,400 people wounded in addition to the 15 deaths. One video circulating on social media appears to show Palestinian protesters running from live fire, and one man is shot from behind as he carries a tire back to the main group of protesters (warning: graphic content):

“He had no gun, no molotov, a tire. Does that harm the Israelis, a tire?” Mohamed Abdul Nabi, 22, the brother of the dark-shirted man shot in the video above, told the Washington Post. “He wasn’t going toward the Israeli side. He was running away.” The families of those killed have called for investigations into the deaths.

On Friday, Israeli Defense Minister Avigdor Lieberman warned residents of Gaza that the Hamas government was “playing with your lives,” and said “anyone who comes close to the [border] fence today puts himself at risk.” After Friday’s violence, Lieberman said that Israeli soldiers along the border “deserve a medal” for their actions, and that there would not be any inquiry into the 15 deaths. The Israeli government has said the protests were used by Hamas to cover for attacks against the country.

Vermont Sen. Bernie Sanders said Sunday on CNN that it was a “difficult situation,” but added that his “assessment is that Israel overreacted” in terms of the violence meted out toward Palestinian protesters.

The protests unfolded this weekend against the backdrop of the crippling decade-long economic blockade of Gaza enforced by the Israeli government and, more recently, the government of Egypt. The New York Times reported in early February that the UN warned that Gaza—a territory with roughly 2 million residents—was “nearing total collapse, with medical supplies dwindling, clinics closing and 12-hour power failures threatening hospitals.” Water in the territory is “nearly undrinkable,” the paper reported, and health officials and aid workers are worried about a cholera outbreak. The government of Israel has severely restricted the flow of goods of people into and out of the territory over the last ten years, and the government of Egypt has also cut off tunnels in 2013 that were used to smuggle goods and generate revenue, the Times reported.

“We are dead,” one protester, Zakia Abu Ajwa, told the Times, “but we have breath.”