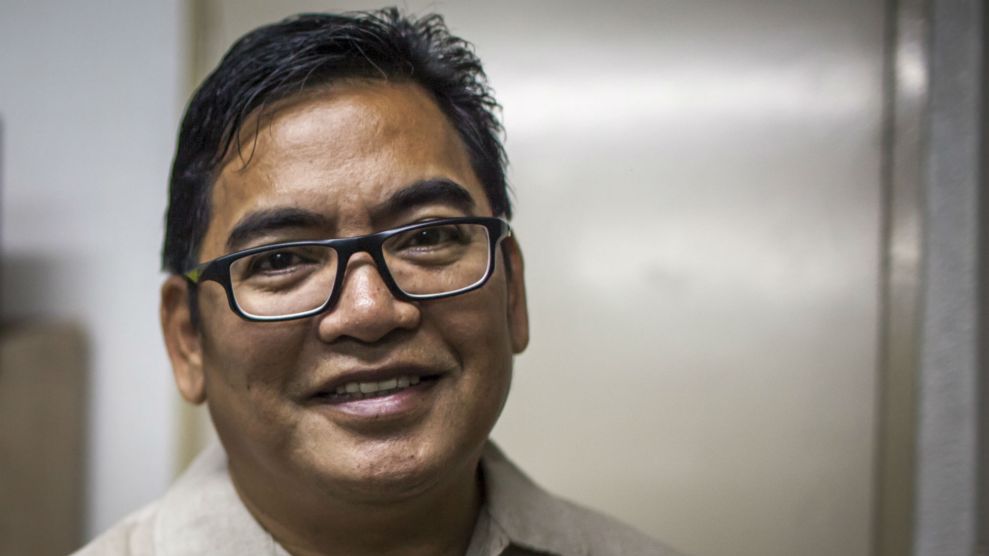 While the United States effectively banned lead-based paint in 1978, in many developing countries—even after decades of research showing how lead is linked to learning disabilities, lower IQ, and other health effects in children—the element is still abundantly applied in paint products, with lead concentrations sometimes up to 100 times higher than what’s permitted in the US.

The Philippines had long been a prime example of this. Just ten years ago, local activist Manny Calonzo decided to test the paint in his home country—the first person to publicly do so. Calonzo had long been involved in consumer safety, working for Consumers International in Penang, Malaysia, in the late 90s. After he returned to his home country, in 2008, he became president of pollution watchdog EcoWaste Coalition, a network of more than 150 environmental groups based in Quezon City.

If you do a Google search for lead paint or lead exposure, so many articles will pop up relating to problems in the US. We do not want that to happen in our country.

Alarmingly, Calonzo found that most of the paint he tested contained lead levels above the allowable US limit, 90 parts per million (ppm), with more than 40 percent of the paint measuring levels over 10,000 ppm. This shocked Calonzo, a grandparent of 12. For years following the discovery, he used scientific evidence to advocate for the phase-out of lead paint in his country and organized more than 100 events to draw attention to the issue. Five years later, the government finally listened.

In December 2013, the Department of the Environment and National Resources secretary signed a Chemical Control Order, which limited lead to 90 ppm, and aimed to eliminate household lead-based paint over the course of three years. By January of last year, 85 percent of the paint market in the Philippines was certified as safe.

Calonzo is credited with protecting the lives of millions of Filipino children. On Monday, Calonzo will be granted the Goldman Environmental Prize, commonly called the “Oscars” of the field, along with six other global winners—including LeeAnne Walters, who exposed the Flint water crisis in Michigan.

A few days before the awards, I sat down with Calonzo in San Francisco to talk about his work with EcoWaste Coalition, how he hopes to inspire a new generation of environmentalists, and one very memorable Christmas.

Mother Jones: Before we talk about your work, I’m interested what it was it like growing up in Makati [the country’s financial center, in Manila]. What did your parents do?

Manny Calonzo: I come from a typical Filipino family. My father used to be a government employee before he passed away in 2006, and my mother is a home manager. I have five other siblings.

MJ: Has being a grandparent shaped your experience as an activist?

MC: Before I got involved in this advocacy in the Philippines, we had encountered toys containing toxic metals, such as lead, cadmium, and mercury, above the allowable limits. And that was really scary.

MJ: Do you remember any specific products that your grandchildren played with that you later found out might be contaminated?

When we received the results, we were really shocked because high levels of lead were detected in most of the samples.

MC: The most recent was a chair and table set given by McDonalds to children celebrating their birthdays in their restaurants. One of my grandchildren was given a complimentary set. I was curious because the furniture was brightly colored, so I brought them to the office, and using our X-Ray Fluorescence analyzer, we detected high concentrations of lead, more than 50,000 ppm on the yellow-coated metal frames, way above the threshold limit of 90 ppm. So, just to be sure, we sent the chair to the lab for analysis, and it was confirmed. We reported it to McDonalds and they took immediate action.

MJ: Tell me a little about your research process. How did it all begin?

MC: Our first foray into this research was in 2008. The EcoWaste Coalition participated in a study organized by Toxics Link, an NGO based in Delhi, India, in collaboration with IPEN, an international NGO network promoting safer chemicals policies and practices. We bought paint samples in Manila and shipped the entire cans to India for analysis in a government-accredited laboratory.

When we received the results, we were really shocked because high levels of lead were detected in most of the samples. Follow-up studies conducted in 2013 and 2015 also confirmed the prevalence of highly-leaded paints in the local market. The last study we conducted was in 2017 and we saw some progress.

MJ: What kind of progress?

MC: Based on the study we conducted in 2017, 77 percent of the 104 paint samples analyzed pass the 90 ppm lead paint limit. The remaining 23 percent are still non-compliant, suggesting the need for further compliance monitoring—but that was remarkable progress from the previous studies.

MJ: It seems like the Philippine government was very receptive to your advocacy. What’s your “secret sauce”?

MC: I think our painstaking efforts to reach out to stakeholders from the government, industry, and other sectors is a key factor. Without that bridge-building, it would be difficult to get listened to, especially on matters that are quite technical.

It was also very important that our relationship with the paint industry association and their affiliates was very constructive. We didn’t have to deal with any corporate “mafia” of sorts. It was a mutually respectful relationship. There was even a point in time where we got invited in their board meetings to present our views and make recommendations.

We thought it was the best Christmas gift ever that the government could give to the Filipino children.

MJ: Were the paint companies aware of the lead in their paint?

MC: Of course they knew, because lead is intentionally added, but in terms of overall impact to society—particularly to children’s health—maybe that was not as well understood before our campaign was initiated.

MJ: When that legislation did go through [in 2013], what did that feel like?

MC: Actually, there’s a small story behind that. It was signed on December 23, 2013, before Christmas, which is a big thing in the Philippines. I was actually at the gate of the Department of Environment and Natural Resources, waiting for the big news, just to be sure I could text-blast my colleagues. We thought it was the best Christmas gift ever that the government could give to the Filipino children.

MJ: Even with legislation, there’s still the issue of houses that have paint on the walls, which is something we’re seeing in the US, in mostly low-income neighborhoods. How do you plan on addressing that problem in the Philippines?

MC: Thank you for asking that. When we were pushing for the phase-out of lead-containing paints in the Philippines, one of the arguments that we forcefully put forward is the fact that by acting now, we avoid a problem that is more complicated and costly to address. Often times, we cite the US experience. If you do a Google search for lead paint or lead exposure, so many articles will pop up relating to problems in the US. We do not want that to happen in our country. I understand that in the United States, about eight to 15 US dollars are needed per square foot, or about 10,000 US dollars are needed to safely remove lead in a typical US house. That’s a lot of money. And developing countries can’t afford that, so it makes sense that we act fast and prevent childhood lead exposure by phasing out lead paint now.

MJ: Speaking of the future, is there anyone in your family who you’ve inspired to work on this kind of advocacy?

MC: One of my grandchildren, his name is Aedan. He’s nine years old. He has good grades on math and science, and he knows the word “toxic.” He knows that some toys can be hazardous for him if they contain lead, so I am hoping I can cultivate his curiosity to become someone who can help in safeguarding his generation against toxic pollution.

MJ: That reminds me—I saw that EcoWaste has done outreach to schools to teach kids about lead paint. What is the goal there?

MC: I think it is important for young children to get informed about the issue at an early age because they’re the ones affected most by lead exposure. And, it is not uncommon in the Philippines for young children, when they get back home, to share news and stories to their parents and to their siblings. We’re hoping a kind of multiplier effect will happen.

MJ: I know you’re being awarded the Goldman Prize for your work on lead-based paints, but you and EcoWaste work on a lot of different environmental issues. Is there one global environmental issue that you think isn’t getting enough attention?

MC: I think chemical safety in general doesn’t rank that high in the list of priorities of governments and other sectors. I think there is a need to elevate the issue of toxic chemical pollution to a higher level because it is a common threat to people’s health and well-being, even to babies who are still growing in the womb.

You have studies in the US showing that babies are born pre-polluted with highly hazardous chemicals. Even breast milk is also affected by these pollutants. I think more resources should be provided to efforts at the global, national, regional, and local levels to promote and ensure a toxics-free future for all.