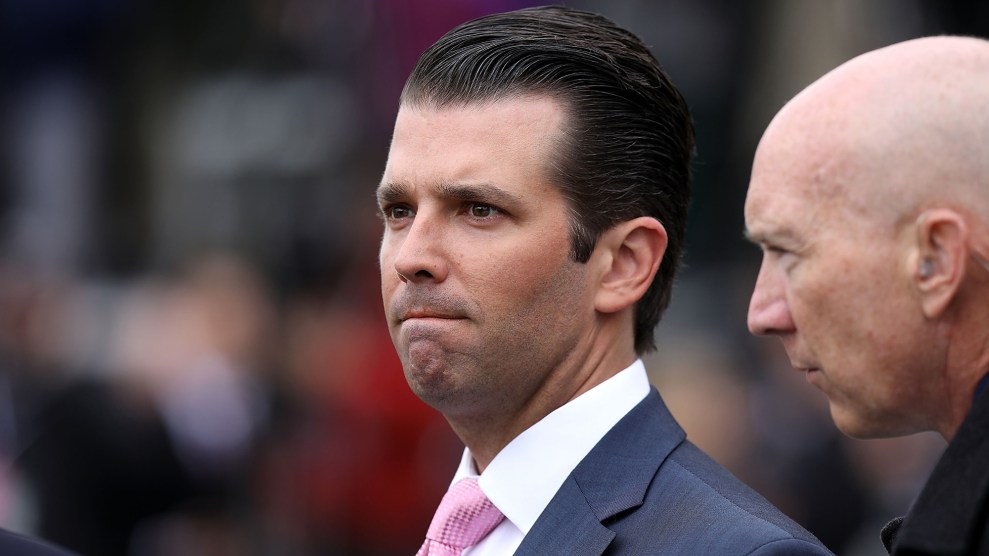 A Democratic senator is calling for an investigation into whether Donald Trump Jr. lied when he told the Senate Judiciary Committee that aside from Russia, he knew of no other foreign government or foreign nationals who offered to assist the Trump campaign in 2016. In a letter sent Thursday to Sen. Chuck Grassley (R-Iowa)—the committee chairman—Sen. Chris Coons (D-Del.) called for an open hearing in which Trump Jr. could be asked to explain his past statements.

Last weekend, the New York Times reported that in August 2016, Trump Jr. and Trump aide Stephen Miller met in Trump Tower with an Israeli social media expert named Joel Zamel; Erik Prince, a prominent Republican security contractor; and George Nader, an emissary for two princes from Saudi Arabia and the United Arab Emirates. The Times reported that the meeting was “convened primarily to offer help to the Trump team” and that it helped forge “relationships between the men and Trump insiders that would develop over the coming months—past the election and well into President Trump’s first year in office, according to several people with knowledge of their encounters.” It’s illegal for foreigners to assist US electoral campaigns.

Trump Jr.’s lawyer, Alan Futerfas, told the Times that Trump Jr. “recalls a meeting” in which Nader, Prince, and another individual “who may be” Zamel pitched “a social media platform or marketing strategy. [Trump Jr.] was not interested and that was the end of it.”

But in his letter to Grassley, Coons noted that Trump Jr. appears to have told a very different story during his September 7, 2017, closed-door appearance before the committee. On that occasion, Trump Jr. discussed another infamous Trump Tower meeting, in which he sought information damaging to Hillary Clinton from an emissary of the Russian government. But as Coons pointed out, Trump Jr. also told the committee that he had no knowledge of any offers of assistance from non-Russian foreign governments or non-Russian foreign nationals.

In his letter, Coons noted that Grassley referred Christopher Steele—the British former intelligence officer who investigated President Donald Trump’s potential ties with Russians ahead of the election—to the US Department of Justice for possible criminal charges after alleging that Steele had lied to the FBI about his contacts with the media. Read Coons’ full letter below: