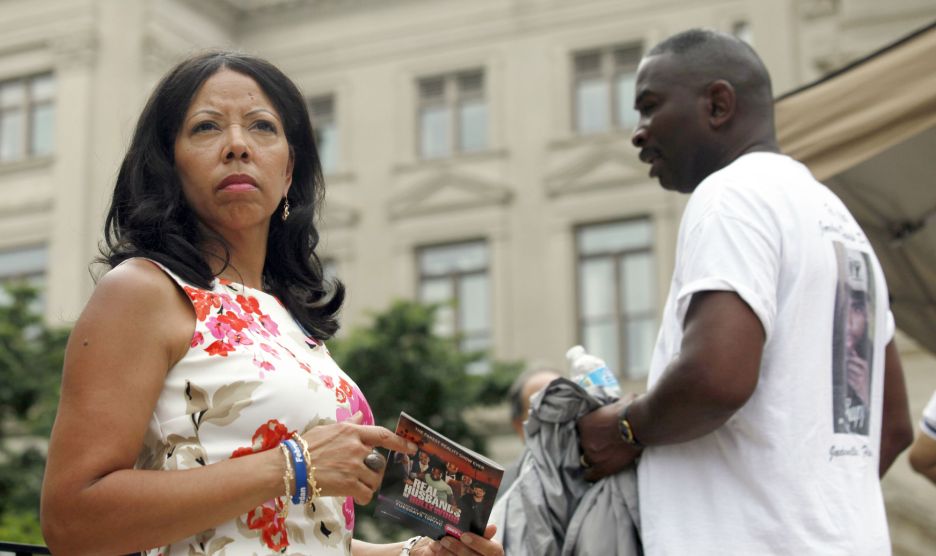 McBath at a gun violence rally in 2013.Jaime Henry-White/AP Images

There was plenty for progressives to celebrate on Tuesday night in Georgia—and it was a moment that signaled a huge milestone in black women’s political power ahead of November.

In a downtown Atlanta Sheraton packed with supporters, Democrat Stacey Abrams celebrated becoming the first black woman to be nominated from a major party for governor in American history. But another victory of sorts was playing out in nearby DeKalb County, where first-time candidate Lucy McBath earned the most votes in the Democratic primary for  Georgia’s sixth congressional district. Though it wasn’t the same kind of celebration as Abrams’—McBath didn’t top 50 percent of the vote, so she will now advance to a July run-off against businessman Kevin Abel—many in the chattering classes considered even getting to this point a real long shot. McBath is a black woman running on gun safety in Georgia, and, what’s more, she only entered the race for GA6 in April. If elected, McBath would be the only black woman in Georgia’s congressional delegation.

That said, it wasn’t such a long shot for people paying attention. I profiled McBath and her move into politics for Mother Jones last spring. Her political awakening can be traced back to 2012, when her only child, Jordan Davis, was shot and killed by a white man at a Jacksonville gas station. He was just 17 years old, and his murder became a catalyst for the Black Lives Matter movement. From that tragedy, McBath emerged as an outspoken gun-control advocate and eventually left her job as a Delta flight attendant to become a full-time spokesperson for Mom’s Demand Action for Gun Sense in America. As I wrote then, McBath, also a devout Christian, has been critical “in getting the gun control movement to look beyond mass shootings and high-profile white victims and take seriously the concerns of the black communities most affected by everyday gun violence. And she’s become particularly important in helping reach white evangelical constituencies traditionally hostile to gun control.” Her name, though, is probably most familiar to people as a “Mother of the Movement,” alongside other black women who have lost their children to gun violence and  police abuse. McBath’s journey has been captured by two high-profile documentaries, Abigail E. Disney’s The Armor of Light and Marc Silver’s 3 1/2 Minutes, 10 Bullets.

“Serving my community, saving people’s lives—that’s my life,” McBath told me then. “I never looked back.”

You don't stop being a mother when you lose your child. For 17 years I was blessed to share special occasions and life's milestones with my son, Jordan. I know he's guiding me today; I will always honor his memory by advocating to stop senseless #gunviolence#GA06 #EnoughIsEnough pic.twitter.com/I6N8INB41v

When we met, though, McBath was not running for Congress, and was rather focused on winning a seat to represent historically conservative Cobb County in the Georgia statehouse. While that even that more local race was an uphill battle, after the shooting in Parkland, Florida, that left 17 dead, she decided she needed to think bigger. “The students are the whole demographic of individuals we’ve needed to stand up and to act on their own behalf, not just for themselves but for all gun violence victims,” McBath told me in April about why she decided to make the switch.

“After the shooting in Parkland, Florida, I knew that I could no longer sit on the sidelines while the politicians in the pocket of the gun manufacturing lobby decide the future of our gun laws,” she later wrote on her campaign website.

Shannon Watts, the co-founder of Moms Demand Action and a close adviser to McBath, is hopeful after Tuesday’s result and says that she’s encouraged McBath to run for public office since they first met five years ago. “Not everyone has charisma, and Lucy has that in spades,” Watts told Mother Jones on Wednesday. “She is the most charismatic person that I’ve come in contact with. There’s no one who meets Lucy who doesn’t walk away adoring her. And I think that is in many ways for an excellent member of Congress.”

But first McBath has to convince people in Deep South Georgia to accept her message of what she refers to as common sense gun safety.  McBath’s platform calls for requiring background checks for all firearm purchases, raising the legal age to buy a firearm to 21, and making it harder for people convicted of domestic violence to obtain weapons. They’re betting this can work in a state where Republican gubernatorial hopeful Brian Kemp, who will also face a run-off this summer, ran a campaign ad bragging about being “so conservative” while holding a rifle.

Luckily, McBath is skilled at raising money. First, she’s got a movement behind her: Everytown for Gun Safety, billionaire former New York City Mayor Michael Bloomberg’s non-profit, merged with Moms for Demand Action in 2013 and has established itself as a financial and political force looking to compete with the National Rifle Association. And even as a first-time candidate, McBath has enough name recognition that she can host out-of-state fundraisers, which will be crucial in the next stretch of the race. Her advocacy has even earned her key national endorsements, like one from former Rep. Gabby Giffords: “I can’t imagine the pain Lucy suffered when her son Jordan was killed, but Lucy has taken that tragedy and turned it into action, fighting for gun reforms that could put an end to the gun violence crisis gripping our country.”

If the gun message resonates with Democratic voters between now and July, she might have an edge over Abel, who also supports increased gun control measures and has made the argument that the Centers for Disease Control need to start studying gun violence in America, which it hasn’t done in years. Yet he lacks the profile of someone like McBath. The real test of the gun-control message will be in November, when McBath would face Republican incumbent Karen Handel, who is endorsed by the National Rifle Association.

Handel won the seat in a supercharged special election last year against Democrat Jon Ossoff, who decided not to run again for the seat this year. But Ossoff nearly beat Handel, raising gobs of money from across the country in the process and showing that Democrats might very well have hope in the historically conservative district that was long represented by Republican Tom Price, before he left to join (and quickly leave) the Trump administration.

Watts, for one, is excited. As I wrote before, McBath isn’t the only candidate her group is supporting, but she is one of the most prominent test cases. The Moms Demand Action head thinks it’s a natural step to go from advocating for policy solutions to wanting to make policy itself. “Thirteen of our volunteers and gun violence survivors ran for office this past November,” she said Wednesday. “Nine won, [and] we have dozens more running this coming November for a variety of offices, everything from city council to statehouse to Congress.”

She added, “Our volunteers go to statehouses stop bad bills or support good bills, and what they realize very quickly is that stat representatives aren’t rocket scientists. There’s no secret sauce to doing this. It just takes being intelligent and strategic.”

McBath told me a few months ago that of course her aim is to win, but even if she falls short in July or in November, she says, “the overreaching goal is to make sure that we are forcing our legislatures to do right by the people. I want to be part of that process [and] I know that my voice will have a great deal of impact because this is what I do.”