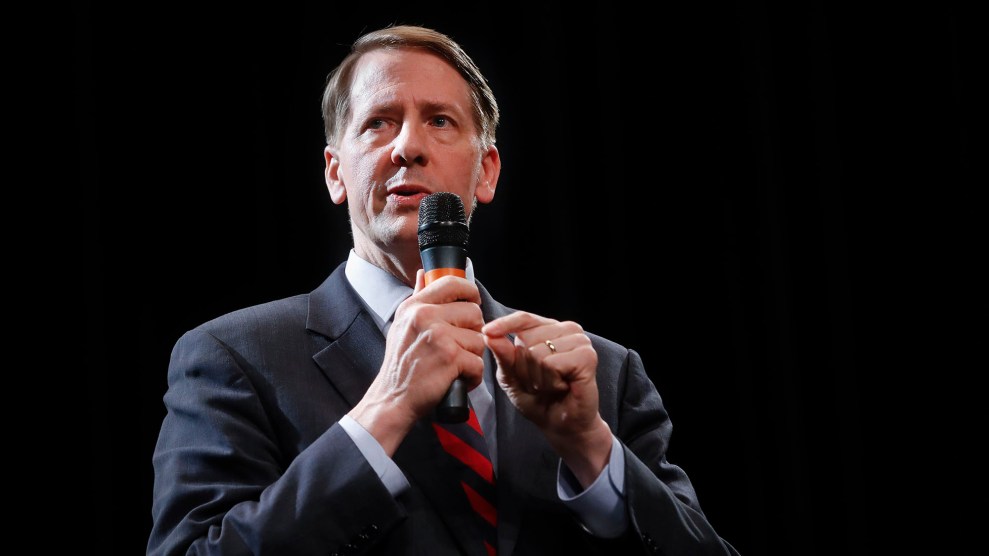 Richard Cordray speaks during the Ohio Democratic Party's fifth debate in the primary race for governor on April 10, 2018, in Middletown, Ohio. John Minchillo/AP

Richard Cordray will be the Democratic nominee for Ohio governor in November, according to the Associated Press, which called the race after Cordray locked in a large lead in early returns Tuesday night. He defeated former Rep. Dennis Kucinich in a closely-watched primary that featured two progressives who, in very different ways, struggled to demonstrate their liberal credentials. Cordray will face Republican Mike DeWine, the state’s current attorney general, in November. Despite signs of a blue wave this fall, it’s expected to be an uphill battle for Cordray. Ohio went for Donald Trump in 2016 by eight points as the purple state trends increasingly red. A March poll found Cordray down 8 points to DeWine.

The fact the Democratic primary featured two economically progressive candidates fits Ohio, where the once-bustling steel plants and manufacturing centers have largely given way to hollowed out cities and rusted out factories. During the presidential campaign, then-candidate Trump’s attacks on free trade deals resonated there. Sherrod Brown, the state’s Democratic senator, has long run as an economic populist, and Cordray is expected to champion a progressive economic agenda. But during the primary, both had pitfalls. Cordray had the policies of a progressive but the exterior of a dispassionate academic, while Kucinich displayed the attitude of a progressive but dabbled in pro-Trump conspiracy theories.

On paper, Cordray has progressive credentials tailor made for the anti-elite sentiment of the Trump era. A former Ohio attorney general, from 2012 to 2017 he ran the Consumer Financial Protection Bureau, the federal agency created at the behest of Sen. Elizabeth Warren (D-Mass.) to protect consumers from unfair and predatory lenders. (In spite of President Trump’s populist rhetoric, his administration is trying to dismantle the agency.) While other politicians take flack for accepting money from Wall Street, Cordray can boast that the CBPB took $12 billion from the financial industry. But boasting doesn’t come easy to the soft-spoken Cordray, who admits that tooting his own horn in something he’s had to learn on the campaign trail. Warren, who endorsed Cordray, has told him to brag more. Cordray’s buttoned up, mild-mannered exterior made him vulnerable to a primary opponent who comes in a more stereotypically firebrand package.

A former US congressman and mayor of Cleveland, Kucinich’s progressivism is well-known—but it wasn’t enough to catapult him past Cordray, who had more money behind him. In long-shot presidential campaigns in 2004 and 2008, Kucinich ran on single-payer health care, marriage equality, tuition-free college, and getting out of the Iraq War—before these positions were cool. Our Revolution, a progressive group formed by supporters of Sen. Bernie Sanders after the 2016 election, endorsed Kucinich. Sanders himself did not support either candidate.

During the campaign, Kucinich also zeroed in on the chink in Cordray’s progressive armor: he once had an “A” rating from the National Rifle Association. Though Cordray supports some beefed up gun control enforcement, such as expanding background checks, he has not signed onto Kucinich’s call for an assault weapons ban in the state.

But Kucinich had tarnished his reputation as a progressive hero in the last year by expressing support in some areas for President Trump, and some progressive groups were wary of his politics this time around. Since leaving Congress in 2012, Kucinich has become a Fox News contributor, made an appearance at the Conservative Political Action Conference, praised Trump’s inauguration address, and told Fox News host Sean Hannity that the deep state is trying to take down Trump. In April, Kucinich came under fire for failing to disclose a $20,000 speaking fee from a group sympathetic to Syrian President Bashar al-Assad. He said he would return the money. Kucinich’s “pro-Trump stances over the past year cast real doubt on his qualifications as a Democratic candidate,” Carolyn Fiddler, the political editor at Daily Kos, told The New Republic in January. Neil Sroka, a spokesman for the progressive group Democracy for America, said in the same article that Kucinich has been “aiding the propaganda they’re pushing about Donald Trump.” (Democracy for America group did not endorse either candidate in the primary.)

The general election will feature a match-up Ohio has seen before. In 2010, Cordray narrowly lost the attorney general’s race to DeWine in a wave year for Republicans. This year, the wave is expected to break in the other direction, giving Cordray a decent shot in a state where Democrats are working to remain competitive.