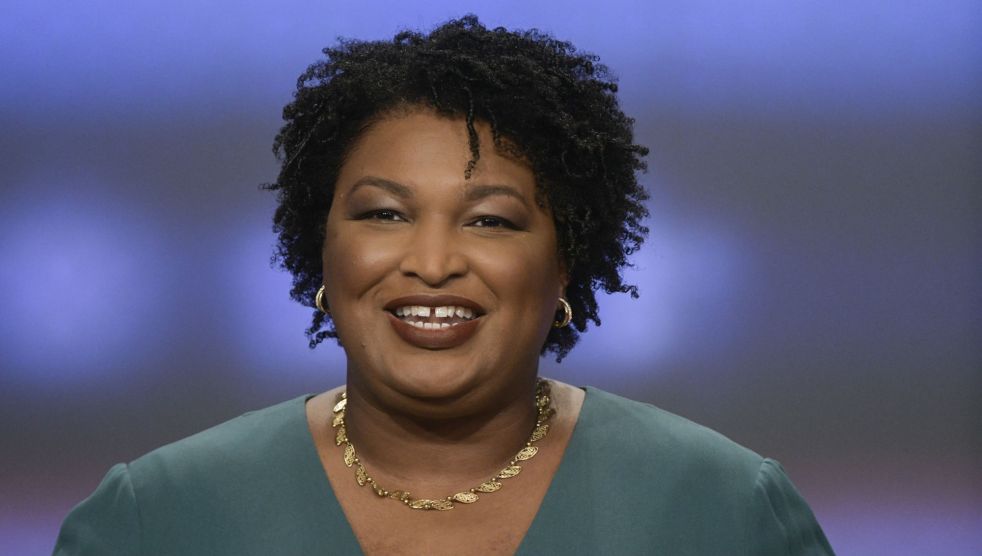 Stacey Abrams became the Democratic nominee in Georgia’s gubernatorial race on Tuesday night, squarely beating rival Stacey Evans with an early and significant lead. Now, after a tough and racially charged primary, Abrams will likely face off this November against Lt. Gov. Casey Cagle, who was leading the Republican field early Tuesday night.

Abrams, the 44-year-old former minority leader of the Georgia Statehouse, would become the first black woman ever elected as governor in the United States. That potential to make history has become the backbone of the narrative for Abrams nationally. When I profiled her back in February, the charismatic politician was trying to build a wide coalition of support but was not shy about playing up the significance of her candidacy. “There are folks who don’t think it’s time for a black woman to be governor of any state, let alone a state in the Deep South,” she said at a fundraiser. “But there’s no wrong time for a black woman to be in charge.”

It certainly won’t be easy for Abrams moving forward. The primary battle was especially bruising, and it’s fair to wonder just how much gas Abrams’ team has left in the tank. The GOP primary was also rough; as my colleague Pema Levy recently noted, the Republican race was filled with outright racist talk about guns and undocumented immigrants.

The Democratic primary race also exposed the deep fissures in Georgia’s Democratic Party. On paper as a candidate, Evans represented a more moderate wing of the party. She’s white and grew up in rural Georgia, and when Abrams and her supporters talked of activating a voting demographic that’s growing more racially diverse, Evans made sure to court disenchanted conservatives who are so turned off by Donald Trump that they might just vote blue. But the liberal-moderate divide between Evans and Abrams—endorsed by Emily’s List, Sen. Bernie Sanders (D-Vt.), and Hillary Clinton—hasn’t been so simple.

In the Deep South, race is always there, just below the surface, but in this primary, race turned into a key issue—and not just because of the historical significance of Abrams’ candidacy. In addition to Sanders and Clinton, Abrams earned the endorsements of high-profile black Democrats like Sen. Kamala Harris (D-Calif.) and Georgia Rep. John Lewis, while Evans was publicly left struggling after some amateurish moves to link herself to Martin Luther King Jr.

But even still, in the small world of monied black Atlanta, Abrams is considered somewhat of an outsider and provokes a certain level of distrust. Born and raised working poor in Mississippi, Abrams entered the political scene in Atlanta as a college activist at Spelman who stood up to the city’s beloved first black mayor, Maynard Jackson, after the 1992 Rodney King verdict and uprisings. After a stint as deputy mayor at 29, Abrams served for years as minority leader and cut controversial deals, making a fair share of enemies among some in the city’s elite—not to mention other prominent local black lawmakers. That includes former Atlanta Mayor Kasim Reid and the city’s current mayor, Keisha Lance Bottoms. Reed broke the color line and publicly endorsed Evans, while Bottoms stopped short of an Evans endorsement but made news just by considering it.

Now comes the real test this November. While Abrams raised more than twice the amount of money as Evans, banking on her burgeoning celebrity and even releasing a pseudo self-help book along the way, likely GOP winner Cagle has already raised triple the amount of money as Abrams. (Cagle also managed to piss off plenty of Georgians by calling for a boycott of Delta—the state’s largest private employer—after it cut National Rifle Association member discounts in the aftermath of the Parkland shooting in February.)

As Abrams told me earlier this year at her campaign headquarters, “Any businessperson will tell you it’s not who has the biggest bank account when you start a business, it’s who gets the most customers.”