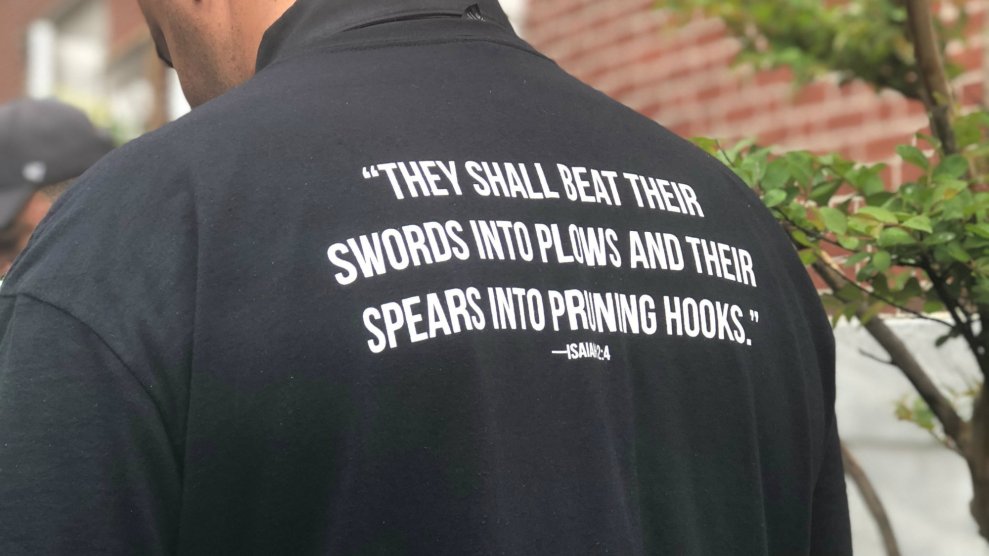 In America, God and guns have gone hand in hand. Prominent white evangelicals like Jerry Falwell Jr., the president of the Liberty University, the largest evangelical university in the country, has bragged about carrying a gun in his back pocket. Robert Jeffress, the pastor of First Baptist church in Dallas, once said that a mass shooting would never happen at his church because many members bring guns to Sunday services.

Several religious groups, such as Catholics and black Protestants, are largely in favor of some restrictions on gun ownership, while white conservative evangelicals have overwhelmingly resisted them. But there is another side to the story: An increasing number of evangelicals are beginning to speak out against the epidemic of gun violence—and using their religion as evidence for controlling lethal weapons.

A few of them were gathered in Philadelphia recently, preaching to a crowd of about 300 who marched from the Old First Reformed United Christ Church to Sen. Pat Toomey’s (R-Pa.) office in Philadelphia to make a statement about guns. As intermittent rain fell on a diverse crowd, protestors stood attentively, ready for the day’s rally. “Violence is the problem,” said Shane Claiborne, an evangelical activist who organized this rally. “We’ve had more people killed [with guns] right here in this country than in 250 years of our foreign wars.”

Claiborne has worked with several other groups to shift the conversation about God and guns. He has brought in RAWtools, a coalition of blacksmiths that accepts donated guns to be repurposed as garden tools. This event is not the first of its kind. For more than a decade, Claiborne and RAWtools have worked together. Last year, Claiborne went to Washington, DC, to repurpose a gun once used to execute inmates to protest the death penalty.

“The real crisis is the moral vacuum left behind when society kicked religion—and with it, morality—out of the public space…We can talk about limiting access to guns, but if we’re truly concerned about violence, let’s also talk about expanding access to God.”

The protesters were not simply going to visit Sen. Toomey’s office; they were going to present him with an AR-15 that had been turned into a garden hoe and ask him to sign a law banning assault weapons. It is the most recent of Claiborne and other Christians’ efforts to put the words of Isaiah 2:4 into action: “They will beat their swords into plowshares and their spears into pruning hooks.”

After a few gun control advocates and faith leaders spoke about how gun violence has affected their communities and shared biblical teachings about weapons, protestors began the half-mile walk to their senator’s office. Some marched with mounted T-shirts that were inscribed with the names, birth dates, and dates of deaths of victims of gun violence. Holding signs with a broken AR-15 incorporated into a peace symbol, they walked while chanting through Philadelphia’s old city neighborhood. Some passersby stood and gawked while others yelled words of encouragement.

Sen. Toomey’s office was chosen because he has shown a willingness to advocate for gun control policies. After a gunman killed 20 children and 6 adults at Sandy Hook Elementary School in 2012, Sen. Toomey and Sen. Joe Manchin (D-W.Va.) co-sponsored legislation that expanded background checks for internet and show sales. In most states, only federally licensed gun shops require background checks.

This sets Toomey apart from many of his fellow Republicans, especially those who identify as evangelical Christians. According to the 2013 Public Religion Research Institute survey, only 38 percent of evangelicals support gun control laws. For decades, Republican politicians wanting to court evangelical voters have tied guns to the Bible, and after every tragedy, they have refused to separate the two. Shortly after the Santa Fe High School shooting, Tony Perkins, president of the conservative lobbying group the Family Research Council, wrote in a blog post, “The real crisis is the moral vacuum left behind when society kicked religion—and with it, morality—out of the public space…We can talk about limiting access to guns, but if we’re truly concerned about violence, let’s also talk about expanding access to God.”

Once the marchers arrived at Sen. Toomey’s office, more speakers got on the stage that had been erected on the street directly outside the building.

“The semi-automatic assault weapon is the weapon of choice of American terrorism,” Movita Johnson-Harrell told the crowd. As she stood on the stage wearing a T-shirt that depicted the face of her child who was killed by gun violence, the Reverend Doug Pagitt, founding pastor of Solomon’s Porch congregation in Minneapolis, Minnesota, held a megaphone for her while she spoke.

In 2011, Johnson-Harrell’s 18-year-old son Charles was murdered by an assault weapon in Philadelphia because of a case of mistaken identity. For the last seven years, she has been an activist and founder of the CHARLES Foundation, a nonprofit dedicated to helping at-risk children in Philadelphia. She is also the vice chair of Heeding God’s Call to End Gun Violence, a faith-based movement to prevent gun violence. Her family had moved from Philadelphia to Landsdowne, a suburb several miles away, because she thought her four children would be safer. “They used a semi-automatic assault weapon, and they put four bullets in my son,” she explained. “And my heart and my brain and my life broke, and nothing has ever been the same.” The crowd stood in silent respect.

Charles was the victim of a gun violence epidemic in Philadelphia. The Philadelphia Inquirer found that between 2006 and 2015, there was one shooting in the city every six hours. According to the latest data available, firearm homicides are the leading cause of death among black boys and men between 15 and 34 years old in Philadelphia. People who live in low-income neighborhoods are the most affected by gun violence. Of all the Philadelphia residents killed by a gun, half of them lived in poor communities; only 2 percent lived in communities with the highest incomes.

“From the time that I did the background check to the time I did the bill of sale, I purchased an AR-15 in 4.5 minutes. It’s disgusting.”

Johnson-Harrell bought the gun to be melted down for the demonstration and found the purchase surprisingly quick and easy. “From the time that I did the background check to the time I did the bill of sale, I purchased an AR-15 in 4.5 minutes,” she said. “It’s disgusting.” The crowd booed loudly.

For Dimitri Kadiev, a native of Los Angeles who has been traveling the world for 25 years, America’s gun culture is fueled by fear of the other. When asked if he ever felt as if he needed a gun when hitchhiking with strangers, he simply said, “God is my protection. Christ liberated me from my fear.”

Outside of Sen. Toomey’s office, the Reverend Rob Schenck, an evangelical clergyman who has ministered to many conservative members of Congress, including Sen. Toomey, held a toy replica of an AR-15. “When we talk about these instruments of death, it is a matter of the sanctity of life,” he said. Schenck is a conservative—he has been staunchly against abortion and, until recently, an opponent of same-sex marriage—but he has been one of the few who have felt the need to tackle the issue of gun violence within this religious community. The documentary Armor of Light is about his attempts to connect questions of gun violence with respect for life to his conservative followers.

“These instruments are designed for a purpose: The mass killings of human beings,” Schenck said, concluding, “Being Christian means to be Christ-like, and there is nothing Christ-like about these.”

When the planned rally was over, a small group of people lined up outside the building in an attempt to get inside and present the repurposed weapon to Sen. Toomey’s office. As the crowd chanted, “Thank you, we love you!” law enforcement told them they wouldn’t be permitted to enter. Claiborne and others sat down in front of the entrance. After nearly two hours, the police began arresting the protesters, including pastor and speaker Doug Pagitt, who refused to stand and had to be carried away.

I must say my pal Doug @pagitt looked like royalty today as the police carried him into custody. #DemandTheBan pic.twitter.com/jE9eIp7KDv

“I was proud to Demand the Ban on Assault Weapons. I was unwilling to support the shutting down of this demand by aiding in my arrest,” Pagitt wrote on Twitter after being released from custody. “I am now free. And I will continue to declare that the impossible is imaginable and one day will seem inevitable.”