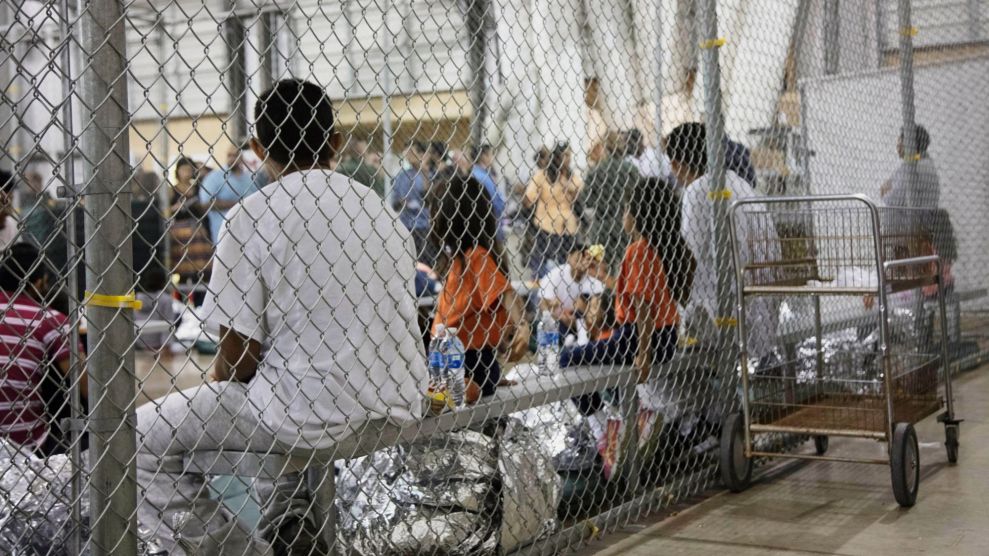 People who have been taken into custody related to cases of illegal entry into the United States sit in one of the cages at a facility in McAllen, Texas, Sunday, June 17U.S. Customs and Border Protection's Rio Grande Valley Sector via AP

Throughout the ongoing family separation crisis, President Donald Trump has acted as though the government has only two options for dealing with migrant families crossing the border: separating them or detaining them together, perhaps indefinitely.

That’s because for months, Trump has been demanding an end to what he calls “catch and release,” or the practice of letting immigrant families go free, often under certain conditions, while they wait for their hearings. According to him, these non-detained immigrants “never show up” to court—an idea that’s become a popular Republican talking point. Just last week, for instance, Sen. Lindsey Graham (R-S.C.) said, “If a family shows up at the border and we let the family go into the country and say, ‘Please come back for your hearing,’ about 80 percent of the time the adults never show up for the hearing.”

Nearly 80 percent of immigrants who are released from immigration detention show up to their court date, contrary to the president’s claims.

But nearly 80 percent of immigrants who are released from immigration detention do show up to their court date, according a report released by Syracuse University’s Transactional Records Access Clearinghouse in 2016, the most recent year for which data is available. And not only has Immigration and Customs Enforcement long used a variety of tools to make sure immigrants appear for their court dates, but they’re also remarkably effective—so much so that just last year, ICE requested $57.4 million more in its budget to fund alternatives to detention.

ICE’s Intensive Supervision Appearance Program, which had nearly 70,000 average daily participants in the most recent fiscal year, has proven to be the agency’s most effective alternative-to-detention program. The program, which is run by a subsidiary of the private prison company GEO Group, uses electronic monitoring devices like GPS ankle bracelets or telephone check-ins with voice recognition software. The program can also include surprise home visits or in-person meetings. More than 99 percent of participants in the full-service version of the program appeared for their court dates in fiscal year 2013, when the Government Accountability Office last conducted a review of the program.

Of course, ISAP isn’t perfect. Though nearly all participants showed up for court, about 21 percent of immigrants who were ordered to be deported in 2013 failed to comply. And immigration advocacy groups have been critical of intensive monitoring devices like ankle bracelets, which they claim can be painful when worn for days on end and can stigmatize immigrants. “It can be very degrading and humiliating to have to wear,” says Katharina Obser, a senior policy adviser at the Women’s Refugee Commission.

A more popular alternative among advocates and Democratic politicians is the Family Case Management Program, which the Trump administration abruptly ended last year. The pilot program, which was started by the Obama administration and was also run by GEO Group, helped connect immigrant families with a variety of case management services.

It costs $318.79 a day to hold an immigrant in family detention. Alternatives to detention cost less than $5 a day.

It was the most recent of several similar case management programs that have been piloted over the past couple decades. Unlike ISAP, these programs didn’t require the use of burdensome tracking devices like ankle monitors, and they focused on connecting immigrants to services in the community while they waited for their court hearings. When the Family Case Management Program went into effect in 2016, social workers helped asylum-seeking families in five metro areas access housing, legal services, education, and medical care. They also reminded families to show up for their court dates and assisted with transportation when necessary. In March 2017, ICE reported that 100 percent of participants appeared at their court hearings, while an average of 99 percent complied with the ICE check-ins required by the program.

At the time the program was cut, ICE cited its high cost: $36 a day per family, compared to an average of less than $5 daily per person using ISAP. Still, that’s significantly less than the $318.79 a day it costs to house each member of a family in immigration detention.

Although the pilot was small, with only 630 families participating just before it was discontinued, some advocates and politicians have argued in recent days for bringing the program back and expanding it. Earlier this month, 109 members of Congress signed a letter that called for replacing family separation with “robust funding for community-based alternatives to detention, such as the Family Case Management Program.”

“It’s really unfortunate that the government never gave it a chance to progress so that we could see where it would have led if it had been allowed to continue,” Obser says. “When the government is currently considering dramatically expanding family detention and the detention of children, it’s an obvious choice that it should try to invest in scaling up alternatives rather than scaling up the incarceration of families.”