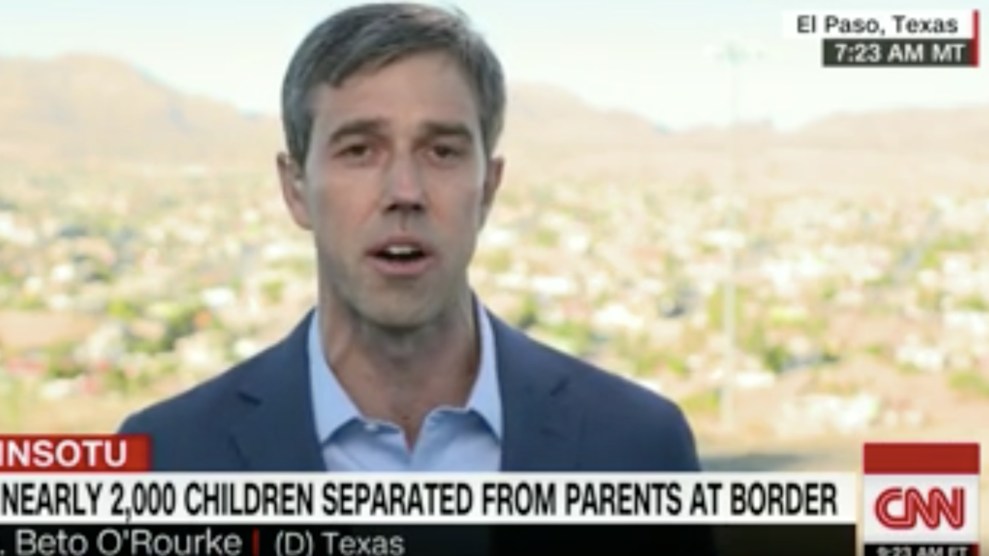 CNN, "State of the Union"

Hundreds of people turned out to protest Sunday in the border town of Tornillo, Texas, where on Thursday the Trump administration announced its plans to house immigrant children in a new detention center—derided by critics as a tent city. The US government has separated nearly 2,000 minors from their parents at the border over a six-week period this spring. By Friday, the first tent shelter was up and running, holding about 200 kids, 20 percent of whom had been forcibly separated from their parents.

The news of the planned tent city, as well as Trump’s family separation policy that has helped create demand for the new detention facilities, has prompted widespread outrage—including from Democrats, Republicans, and even evangelical leaders and the Catholic Church.

The protest in Tornillo was organized by Rep. Beto O’Rourke (D-Texas), who is currently running to unseat Republican Ted Cruz in a bid for the US Senate. (My colleague Tim Murphy profiled the Texas hopeful back in September.) A number of other Democratic candidates from Texas, as well as Rep. Joe Kennedy III (D-Mass.), were at the protest, along with hundreds of ordinary people who were drawn to the border by harrowing stories of children being torn from parents who have traveled thousands of miles seeking safety and asylum in the US.

O’Rourke told CNN’s Jake Tapper that the process of taking children from their parents is “inhumane.” He added, “I’d like to say it’s un-American, but it’s happening right now in America. And it’s on all of us, not just the Trump administration.”

O’Rourke and Kennedy weren’t the only members of Congress spending the weekend protesting and investigating conditions for migrant families. Another group of New York and New Jersey Democrats, led by Rep. Jerrold Nadler (D-NY), spent Sunday morning trying to get access to a family detention center in Elizabeth, New Jersey. Center officials initially said they’d call the police on the visitors, but eventually allowed in the delegation.

Speaking to reporters after the visit, [Rep. Frank] Pallone Jr. said several detainees being held at the facility had been separated from family members, including one whose 7-year-old brother was missing and a father who said that his 5-year-old daughter had been taken from him while he was asleep.

“They came to this country in search of the protection and refuge that the proud inscription on the Statue of Liberty promises to those fleeing terror,” Nadler said. “They are being welcomed by more terror. What could be more terrifying than having your [child] taken from your arms?”

Oregon Senator Jeff Merkley (D) led another group of Democratic lawmakers to the South Texas border near McAllen to tour processing centers run by the Customs and Border Patrol. They planned to investigate the CBP’s practice of referring all immigrants for criminal processing at the border, even if they have valid asylum claims that could legally be made under US law. Earlier this month, Merkley visited another facility in Brownsville, Texas, which holds unaccompanied minors, and was refused entry.

This #FathersDay, I’m thinking of when my kids were young & how impossibly awful the idea of losing them would have been. Ripping children away from parents is cruel. We need a #FathersDayOfAction to #KeepFamiliesTogether – & that’s why I’m headed back to the TX border right now. pic.twitter.com/GPcENnTTwQ

Meanwhile, as the news media and Democrats were focused on the crisis at the border this weekend, Sen. Cruz was spending his time on more athletic pursuits. On Saturday night, Cruz played basketball against late night TV host Jimmy Kimmel, a match up Cruz had been tweeting about for days in advance and exchanging taunts with Kimmel over Twitter:

Left a note for you in your locker room, @jimmykimmel. #KimmelvsCruz pic.twitter.com/N5f0rUgSFt

The contrast between O’Rourke and Cruz wasn’t lost on the Texas House Democratic Caucus:

Today @tedcruz is preparing for a basketball game with @jimmykimmel to boost his popularity, while @BetoORourke is getting ready to march to #Tornillo to protest families being torn apart.

Thanks, Beto, for focusing on real solutions for Texas families. #txlege pic.twitter.com/QTEVus9EJv

Cruz defeated Kimmel 11-9 in the “Blobfish Basketball Classic” in Houston, but Kimmel apparently managed to get a dig at Cruz on the court, asking, “Did you spend more time this week practicing basketball than trying to get those kids out of that detention center?”