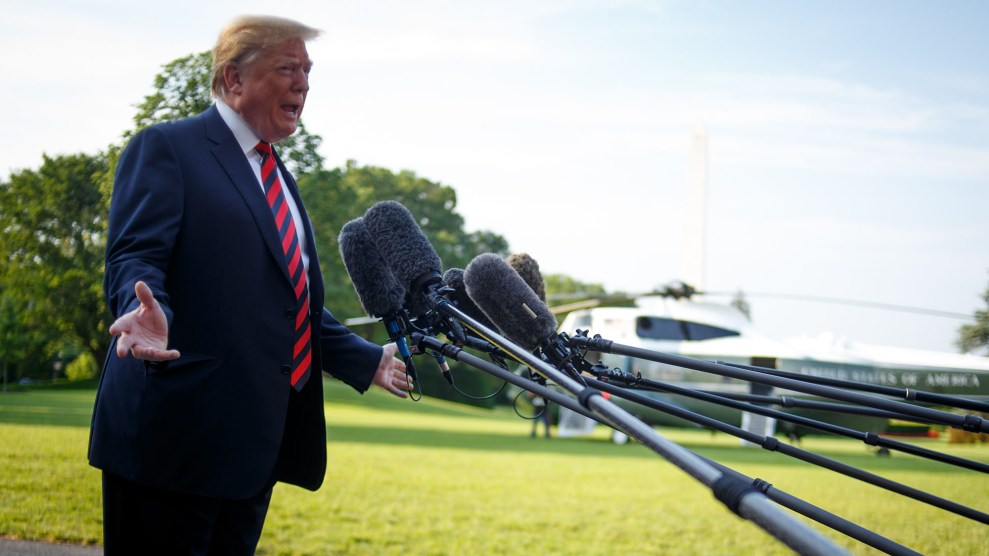 The Trump administration declared Obamacare’s protections for people with preexisting conditions unconstitutional on Thursday—thanks to the tax bill passed by congressional Republicans and signed into law by President Donald Trump in December.

The announcement came in a letter from Attorney General Jeff Sessions and a filing in a federal court in Texas. While it won’t cause any immediate changes in health laws, it represents a major break from repeated promises from Trump and congressional Republicans to preserve the protections for preexisting conditions.

Sessions’ announcement involves some complicated legal reasoning. Republicans slipped a provision into their tax-cut bill that effectively eliminated Obamacare’s individual mandate requiring people to buy insurance. Due to Senate rules, the GOP couldn’t technically erase the mandate without triggering a 60-vote threshold to overcome a filibuster, so instead it just reduced the penalty for failing to buy insurance to zero dollars.

But now, Sessions argues, a 2012 Supreme Court ruling comes into play. The court ruled that the individual mandate was constitutional because it could be considered a tax. But when the penalty is zero dollars, it’s no longer a tax, Sessions claims, so now it’s unconstitutional. And, Sessions says, you can’t separate the mandate from the law’s various consumer protections. So if the mandate is unconstitutional, he argues, the courts need to toss out the law’s regulations on preexisting conditions as well, since Congress determined that the individual mandate was “essential” to the preexisting conditions protections. (Conveniently, the legal filing asks the court to wait until 2019 to strike down these provisions—delaying the full consequences until after vulnerable GOP politicians face midterm elections.)

While Trump and his fellow Republicans have always been eager to describe Obamacare as a horrendous law, they made sure to reassure voters that they intended to keep the Affordable Care Act’s protections that barred insurance companies from charging higher rates to people who have a current or past medical condition. That has always been one of the most popular provisions of the law.

But if the courts side with Sessions and Trump, insurance companies will once again be able to deny people coverage for preexisting medical conditions, charge higher rates to sicker people, and make older Americans pay sky-high premiums. That directly undercuts promises made by Trump and other Republicans over the last two years.

During a presidential debate in the 2016 campaign, Trump was unambiguous. “I want to keep preexisting conditions,” he said. “I think we need it. I think it’s a modern age. And I think we have to have it.” At a campaign event alongside Trump a week before the 2016 election, his running mate, Mike Pence, reaffirmed that the GOP ticket would “protect Americans with preexisting conditions.”

Shortly after he was elected in November 2016, Trump sat down for an interview with 60 Minutes, where he was asked if he would protect people with preexisting conditions. “Yes,” Trump responded, “because it happens to be one of the strongest assets.” (He told the Wall Street Journal the same thing around that time.)

A few days before his inauguration, Trump said in an interview with the Washington Post that he would support health care legislation to provide “insurance for everybody.”

During his first speech to a joint session of Congress in February 2017, Trump explained his goals for a bill to repeal Obamacare. The very first point he made was unequivocal: “First, we should ensure that Americans with preexisting conditions have access to coverage and that we have a stable transition for Americans currently enrolled in the health care exchanges.” (This section of his remarks starts at about the 37-minute mark in the video below.)

Last April, while Congress was debating various measures to repeal the Affordable Care Act, Trump reaffirmed that he didn’t want to sign any bill that ditched Obamacare’s consumer protections. While the versions of the bill at the time did weaken the preexisting conditions ban, Trump declared that he wouldn’t sign a bill that got rid of those provisions. “Preexisting conditions are in the bill,” he insisted. “I mandated it, I said it has to be.”

When Congress took one last stab at a standalone repeal bill of Obamacare last fall, Trump tweeted that he wouldn’t sign it if it got rid of preexisting condition protections.

I would not sign Graham-Cassidy if it did not include coverage of pre-existing conditions. It does! A great Bill. Repeal & Replace.

Trump is far from alone in promising to protect people with preexisting conditions. In January 2017, House Speaker Paul Ryan (R-Wis.) was confronted about his opposition to the health care law by a cancer survivor during a CNN town hall. He went out of his way to say that he didn’t want to ditch Obamacare without finding an alternative way to protect people with preexisting conditions. (State high-risk pools were his preferred route.)

When Republicans introduced their bill to repeal Obamacare last year, Ryan touted that it would protect “patients with preexisting conditions.” Maybe it should have been a tell when the tax bill rollout didn’t include that same promise.