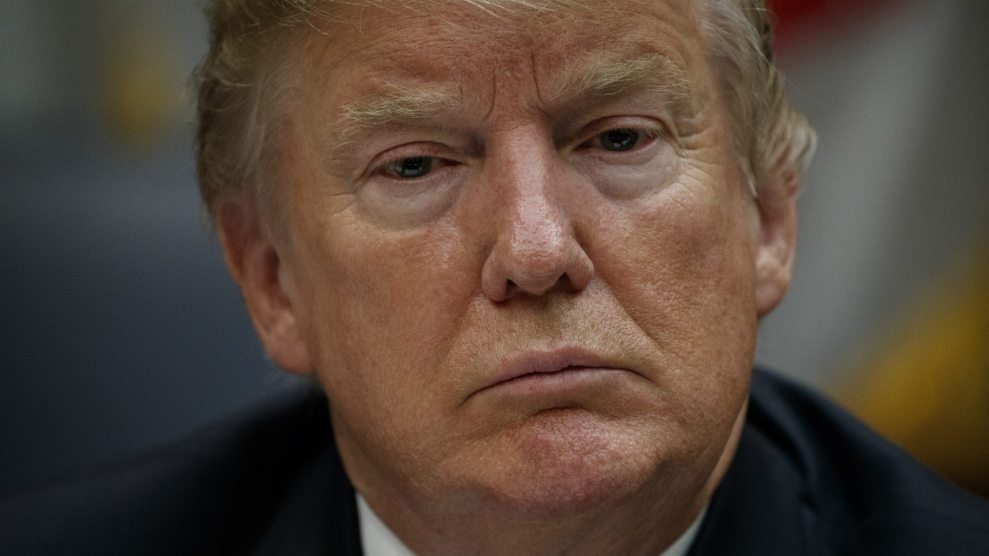 Visits to Donald Trump’s hotels and resorts by the president and people seeking to influence him have been seen as boons for his business empire, but his real estate business seems to be stagnating. Since he took office, there have been few big property sales for the Trump Organization. Now the president’s company appears to have pulled its most luxurious offering off the market, after it lingered unsold for years.

Trump brands himself as a hotel magnate, but according to his personal financial disclosures for the last several years, condo and land sales have accounted for a large chunk of his revenue and provided the cash to pay off his debts and finance new projects. And there’s been trouble in that part of Trump’s empire.

A crown jewel of Trump’s real estate holdings is the penthouse unit at Trump Park Avenue in New York. Trump Tower may be the president’s most iconic New York property, but he sold most of its condo units decades ago and retains ownership only of a few units there. Yet within Trump Park Avenue, the Trump Organization still owns 13 regular units, five penthouse units, and two commercial units, each worth millions—or tens of millions. Of the building’s eight penthouse units, Unit 31/32 is the most magnificent—more than 6,200 square feet on two levels, with another 1,600 square feet of rooftop patio. But it’s not moving.

Trump purchased the Park Avenue building in 2002, renovated it, and sold many of the units in the early 2000s. His former personal attorney, Michael Cohen, has his main residence in the building, and his daughter Ivanka and her husband Jared own two units there. Trump hung onto a number of the pricey penthouse units and has slowly sold them off over the years for hefty prices. In 2015, for instance, he sold a penthouse unit on the 24th floor for $21 million. That year, he reported earning $44.3 million in income from the building, making it the fourth-largest source of revenue for his operations (ahead of his Mar-a-Lago resort and most of his golf courses). Yet Trump’s only major real estate sale since taking office came in late February 2017, when he sold the 28th-floor penthouse unit in Trump Park Avenue for $15.8 million to a Chinese-American businesswoman with ties to powerful members of the Chinese military intelligence community.

The grand top-floor penthouse has languished, unsold, since 2007, when Trump first put it on the market with an asking price of $45 million. The price went up and down a few times, at one point hitting $51 million. In 2015, Trump slashed the price to $35 million. And yet, no buyer.

While Trump maintains he no longer has day-to-day control of his companies, he still owns—and profits from—all of its assets and any deal that might be made. Based on his company’s actions last year, it seemed eager to finally make a deal for the penthouse. It cut the asking price to $29.5 million, which is where it sat—heavily advertised on the Trump International Realty’s Instagram and Facebook accounts—until this spring.

Then the listing was pulled.

Trump Organization executives did not respond to inquiries about the property’s status. It has been missing from Trump International Realty’s website since mid-May, and New York City property records show no sign of a sale. The condo does remain on the Trump International Realty website but is listed under properties to rent—for a cool $85,000 per month—instead of to buy.

Two other condos owned by Trump in the building that were listed for sale—and had their prices slashed after lingering—have also been removed from the Trump International Realty website, with no sign of any sale. Last August, a large estate owned by Trump on the Caribbean island of St. Martin had its price slashed from $28 million to $16.9 million. There have been no takers. But unlike the Trump condos in New York, it appears still to be on the market.