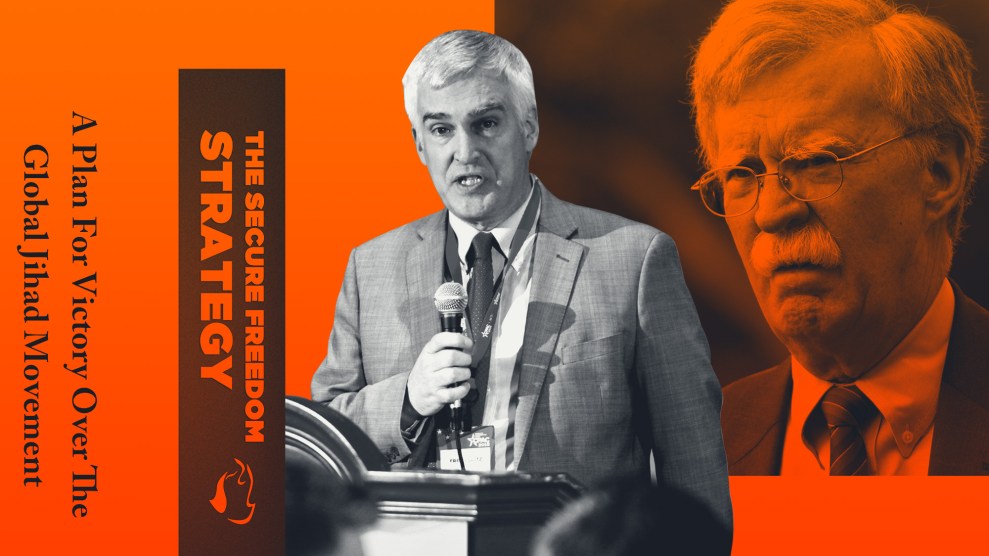 Earlier this month, the Wall Street Journal reported that Fred Fleitz, the chief of staff to national security adviser John Bolton, had previously been associated with anti-Muslim views, most notably as the co-author of a report he wrote with critics of Islam that called for some Muslim Americans to be stripped of their citizenship. Coming under fire for his connection to this report, Fleitz, a former CIA analyst, has tried to distance himself from it and its more extreme co-authors. But a review by Mother Jones shows that Fleitz has repeatedly cozied up to critics who go beyond denouncing radical Islam to assailing Islam overall.

In April 2017, for example, Fleitz retweeted a call to “boycott” Homeland, the Showtime cable drama, after Mandy Patinkin, an actor on the show, said that in the current season white male government officials and the US military establishment were the villains, not the Muslim community. A Fox News story inaccurately claimed that Patinkin had maintained, “White Men in Gov’t, Military Are the Problem.” And conservatives on Twitter urged a boycott of the show. Fleitz joined in and retweeted a post that used the hashtag #IslamCult—a tag generally deployed by critics who contend Islam is not an acceptable religion.

Boycott Homeland! This is beyond stupid. https://t.co/XSuDX8KMcy

That same month, Fleitz appeared on the Breitbart radio show hosted by Curt Schilling, the conservative host and former baseball star. In a discussion about political correctness in education, Schilling called Islam a “very violent religion.” Fleitz replied sympathetically: “We’re just not allowed to talk about radical Islam honestly in this country. Our young people are growing up—they have no idea of the threat that they’re facing from this ideology that’s not going to go away.”

After his selection as Bolton’s chief of staff in May, critics seized on Fleitz’s affiliation with the Center for Security Policy, a right-wing think tank that the Anti-Defamation League once accused of promulgating anti-Muslim conspiracy theories. Fleitz served as senior vice president for policy and programs there between 2013 and 2018. It was for the center that he co-wrote that controversial report in 2015 that urged US officials to remove citizenship from Americans who seek “to insinuate shariah-compliant norms into civil society.”

Fleitz denounced that particular portion of the report in a June 2 tweet. “I do not and have never supported this,” he wrote.

3/ Please dont associate me with the above criticism of mosques or the idea that the US should deport Muslims or strip their citizenship. I do not and have never supported this. The reporters who wrote these articles were told this but wrote it anyway.

A senior Trump administration official told the Wall Street Journal that the report “doesn’t accurately reflect Fleitz’s views.” The official added, ” The report had 16 ‘authors’ and they, including Fred Fleitz, didn’t agree on everything.”

But at the time the report was issued, Fleitz did not publicly object to collaborating with persons who have decried Islam and promoted extreme anti-Islam conspiracy theories. On January 16, 2015, Fleitz attended a National Press Club event pegged to the launch of the report, which was titled “The Secure Freedom Strategy: A Plan for Victory Over the Global Jihad Movement.” Fleitz sat a few seats away from co-author James Lyons, as Lyons claimed Muslim Brotherhood members had infiltrated “every one of our national security agencies.” Lyons even insisted that “our lead intelligence agency” is headed by a “Muslim convert”—a bizarre reference to then-CIA director John Brennan, who is not a Muslim.

“There is no such thing as ‘radical Islam.’ I’d like somebody to give me a definition of moderate Islam. There ain’t any.”

Lyons also said, in remarks first reported by the Journal, “There is no such thing as ‘radical Islam.’ I’d like somebody to give me a definition of moderate Islam. There ain’t any.” Frank Gaffney, another co-author and the founder of the Center for Security Policy, where Fleitz worked, had previously contended that radical Muslims infiltrated the highest levels of the US government. In 2009, Gaffney said there was “mounting evidence” that President Barack Obama “actually may still be” a Muslim and warned of the “extensive personal and family ties” between Hillary Clinton aide Huma Abedin and the Muslim Brotherhood. (There is no evidence of either assertion.) And Gaffney wrote a book in 2014 maintaining the Muslim Brotherhood even held “influence” over conservative anti-tax crusader Grover Norquist. Gaffney said Norquist’s wife, who is Muslim, has “radical Islamic credentials.” (Norquist called Gaffney a “stalker” who “spins conspiracy theories.”)

Two other co-authors of the Center for Security Policy report—retired Gen. Jerry Boykin and Tom Trento—had also publicly blasted Islam before Fleitz worked with them on the report. In 2012, Boykin, who was the undersecretary of defense for intelligence in the George W. Bush administration, said, “Islam is evil.” He also claimed in 2011 that mosques only recognize “a global caliphate, not the sanctity or sovereignty of the United States.” Tom Trento, who runs a group called The United West, railed against Islam during a 9/11 memorial service in 2013, according to a local news report. “I’m not talking about radical Islam or moderate Islam,” he was quoted as saying. “I’m talking about all Islam. Their goal is to get every single one of us to convert to Islam. And they won’t stop until we do.”

In recent weeks, Fleitz’s defenders have rushed to his side. One supporter on Twitter condemned the “disgraceful and shameful smearing” of Fleitz. Another railed against his “character assassination” in the media. Rich Lowry, editor of the National Review, claimed in a May column that Fleitz “has been careful to distinguish between his critiques of radical Islam and all Islam.” Perhaps. But as a leading official of the Center for Security Policy, Fleitz has readily worked and collaborated with colleagues who have not.