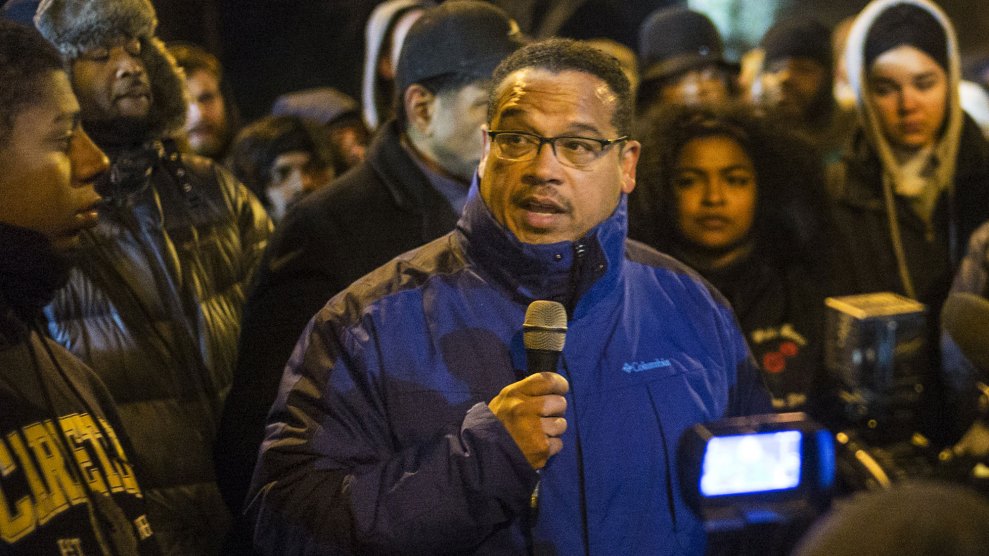 A little more than a year after his bid for chairmanship of the Democratic National Committee came up short, Rep. Keith Ellison said Tuesday he would decline to seek reelection and will instead run for attorney general in his home state of Minnesota. Ellison had flirted with the idea last winter and balked, but a void opened up over the weekend when the Democrat incumbent, Lori Swanson, announced that she was joining the open race to replace Mark Dayton, the state’s outgoing Democratic governor.

Ellison, the first Muslim congressman in American history, is the third ambitious House Democrat since the 2016 election to pursue a state attorney general job, along with former Rep. Xavier Becerra (who is now the attorney general of California), and Rep. Sean Patrick Maloney of New York, who has formed an exploratory committee to run for the post vacated by Eric Schneiderman. It’s a sign of the lack of opportunities for younger members of the minority party in Washington, but it’s also a reflection of the shifting political battlefield in the age of Trump, where—like Republicans during the Obama years—Democratic attorney generals have launched a series of legal battles to tie up key parts of the president’s agenda. As Ellison told reporters at his announcement Tuesday, “it was attorneys general who led the fight against the Muslim ban.” Democratic attorneys general have also sued the administration over immigration enforcement, offshore drilling, marijuana, and health care subsidies.

This is a markedly different place from where Ellison thought he would be last spring, when the DNC chairmanship seemed in reach. (He settled for the title of deputy chair, a job he’s said he’ll keep.) But in many ways attorney general would be a natural fit for a politician of Ellison’s background, experience, and interests.

As I reported in a profile of the congressman last year, his introduction to politics in Minnesota came as an anti-police-brutality activist in the Twin Cities in the late 1980s and throughout the 1990s, filling a role similar to that of Black Lives Matter activists today. Ellison crashed city council meetings, led marches, and started a newspaper, Community Cop Watch, that highlighted perceived injustices in law enforcement and the courts. He ended up as director of a civil rights non-profit, the Legal Rights Center, and got into electoral politics in part because of his frustrations with that job:

After a decade mostly working outside elected politics, Ellison says he decided to run for the state House after testifying at a hearing on sentencing reform and seeing no black legislators. “We oftentimes had these debates and discussions about ‘out of the streets and into the suites’—that was the term that was used to describe the swan song of the civil rights movement,” says August Nimtz, one of the few black professors at the University of Minnesota and a longtime acquaintance of Ellison’s. “He made a decision and thought he could make a difference by being on the inside.”

Attorney general might seem like a detour in the linear world of Washington politics, but it is a logical next step for an activist civil rights lawyer. And it comes as progressives of Ellison’s ilk have placed a renewed emphasis on putting like-minded people in prosecutorial positions. In the last year, activists have flipped district attorney races in Philadelphia and San Antonio, and have set their sights on a slate of races in California and beyond.