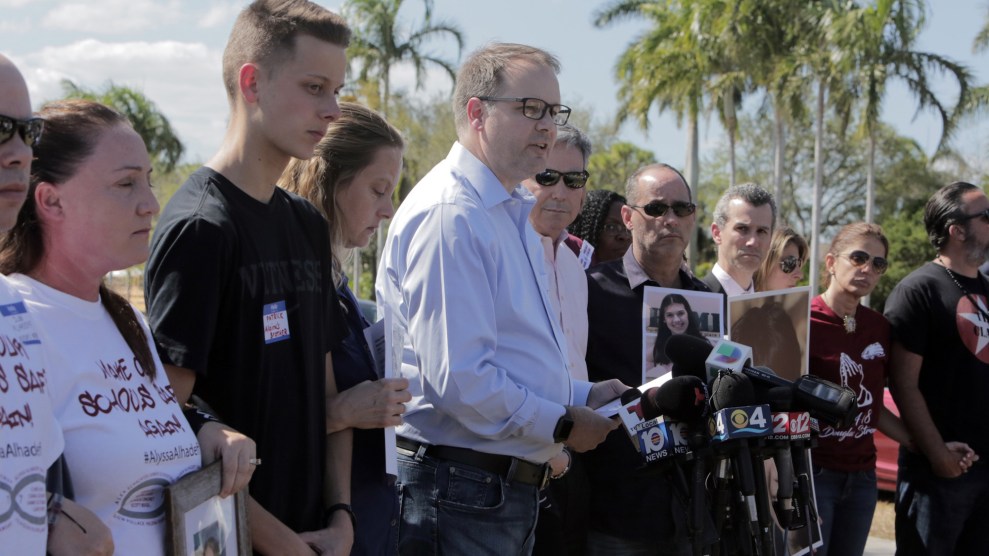 Ryan Petty, center, reads a prepared statement surrounded by other parents of the victims of Stoneman Douglas shooting on March 5, 2018.Jose A. Iglesias/Miami Herald via AP

Families who lost children and spouses in the February 14 school shooting at Stoneman Douglas High School in Parkland, Florida, announced Thursday the creation a new advocacy organization that will seek to address school violence and prevent gun-related massacres.

The group, called Stand With Parkland, promotes three approaches to keep schools safe: school security measures to harden schools’ perimeters; mental health support programs to help identify and treat young people who may pose a risk to themselves or others; and gun control measures such as universal background checks for weapons buyers, which the group refers to as “responsible firearms ownership.” Its goal is to help pass bipartisan legislation at the state and federal level that will stop future school shootings.

This announcement is just the latest initiative by the families of Parkland victims to address the problems that led to their loved ones’ deaths. Much like those other collective efforts, this one is intended to appeal to politicians on both sides of the aisle. While many of the Parkland students and thousands of their “March for Our Lives” supporters have placed their emphasis on gun control laws that draw ire from right, Stand with Parkland has broadened its scope to include mental health and school safety ideas backed by Democrats and Republicans alike in the hopes of attracting bipartisan support. According to Rolling Stone, the group has been working with a DC-based consultant who also advises a centrist Blue Dog Democrats.

It’s an approach these families have been using since shortly after the February shooting. Last month, I wrote about the ways Ryan Petty, who lost his daughter Alaina in the shooting, and Fred Guttenberg, whose daughter Jaime was killed, have worked together, despite their differing views on the gun issue: Petty sees much of the gun debate as a polarizing non-starter, while Guttenberg has become an outspoken gun control advocated. The two have largely set those differences aside and have joined with other Parkland families to push school safety legislation at the state and federal level. Both Petty and Guttenberg are involved in the new Stand With Parkland group, though Guttenberg says that Tony Montalto, who lost his 14-year-old daughter Gina in the shooting, has taken the lead in organizing.

As I explained in my story about Petty and Guttenberg:

[W]here Guttenberg and Petty agree, they work together. They, along with 11 other Parkland families, supported the STOP School Violence Act, a bipartisan bill that provides federal funds to strengthen school security infrastructure and train students and staff how to identify safety threats. The two fathers also threw their support behind the package of reforms Florida lawmakers passed in the wake of the tragedy. That legislation included a new three-day waiting period for all gun purchases, an increase in the minimum age for purchasing rifles and shotguns to 21, a red-flag law, and a ban on bump stocks, the gun accessory used in last year’s Las Vegas massacre that makes semi-automatic weapons behave like machine guns.

Those modest gun control measures fell short of what Guttenberg wanted—he called it “minimally acceptable” and “the best that could happen in Florida.” But it went far beyond anything else the state’s politicians have done recently to restrict gun sales, and it represented a serious defeat for the NRA. Despite his distaste for the gun debate, Petty backed these restrictions, noting that the age provision might have prevented the Parkland shooter from buying a gun. And he’s come to the defense of the GOP legislators who, after backing the bill, received harsh reactions from the NRA. “This legislation was based on the very best ideas for protecting our schools,” he says. “Its core gun control provision gives law enforcement another tool to keep firearms out of the hands of those that pose an imminent risk to themselves or others.”

The group has not yet announced its immediate next steps, but much like their #NeverAgain teen counterparts, it will aim to channel the renewed energy of the gun control movement into measurable political action.