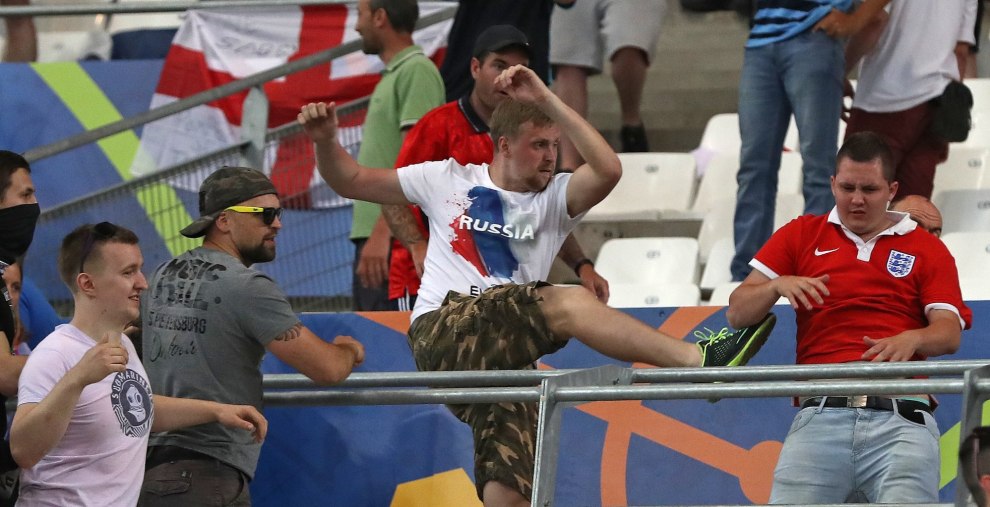 Russia has a serious problem with booze. It’s so bad that Russian men have one of the lowest life expectancies in the world—lower even than their counterparts in famine-plagued North Korea. Male Russian drinkers consume 32 liters of ethanol per year, almost twice as much as American men. That’s the equivalent of a mind-boggling 80 liters of typical Russian vodka. More than one-third of Russian men are estimated to have a drinking problem and fully 16 percent are alcoholics. Some 40,000 Russians die each year from alcohol poisoning.

These statistics have driven Russia to take significant steps in recent years—again—to combat what former president Dmitri A. Medvedev once called a “national disaster.” In 2005, the government banned alcohol sales and ads at sports stadiums, a move that made the Sochi Olympics a mostly dry affair. In 2012, Russia implemented a complete ban on alcohol advertising on TV and radio, online and print media. But soccer fans showing up for World Cup matches this week will be able to drink all the beer they want at the stadiums—as long as they buy it from Budweiser’s parent company, ABInBev.

“Alcoholic drinks are part of the FIFA World Cup, so we’re going to have them. Excuse me if I sound a bit arrogant.”

That’s because the Fédération Internationale de Football Association (FIFA), the scandal-plagued governing body for international soccer, insisted that Russia temporarily repeal its sports-alcohol ban as a condition of hosting the World Cup. Russia complied; in 2013, President Vladimir Putin signed legislation overturning the ban on stadium sales for the month of the games. The law allows FIFA and its sponsors to sell beer at the soccer events, where AbInBev, one of FIFA’s largest sponsors, has exclusive sales rights. Russia also relaxed the ban on beer advertising through 2019 to accommodate World Cup sponsors.

This isn’t the first time FIFA has demanded that a host country relax its alcohol regulations. “Alcoholic drinks are part of the FIFA World Cup, so we’re going to have them. Excuse me if I sound a bit arrogant, but that’s something we won’t negotiate,” FIFA Secretary General Jerome Valcke said in 2012. “The fact that we have the right to sell beer has to be a part of the law.”

That year, FIFA was pushing Brazil to abandon its ban on alcohol sales in soccer stadiums, implemented years earlier to try and curb alcohol-fueled violence. One media outlet calculated that 155 people were killed at Brazilian games from 1988 through 2013. Yet Brazil eventually caved to FIFA’s demands.

Predictably, there were alcohol-fueled fights at soccer stadiums during the 2014 World Cup, prompting FIFA’s Valcke to tell an interviewer, “I was amazed by the number of people who were drunken, and the level of alcohol. Perhaps many people were drunk and, when drinking, violence tends to increase.” He also said alcohol sales during matches was “something we have to look at.”

FIFA nevertheless made beer sales a condition of hosting, both for Russia and Qatar—a Muslim country that places heavy restrictions on the sale of alcohol.

Russia, likewise, has a problem with soccer hooliganism. It is home to mobs of fans who are known to train in mixed martial arts in preparation for violent brawls with supporters of rival teams. In 2016, Russians were involved in one of the worst-ever instances of violence at an international soccer tournament when hundreds of well-trained Russian fans fought hundreds of drunk English fans in the streets of Marseille, France, during the EUFA Euro 2016 championships.

At least 35 people were injured and two English fans were left in comas after being attacked by Russians armed with iron bars and hammers. After Marseille, French authorities banned alcohol and closed bars and liquor stores around the stadium in Lille for the next Russia-England match.

In a 2017 BBC documentary, one Russian fan promised that World Cup 2018 would be a “festival of violence.”

In a 2017 BBC documentary on Russian hooligans, one fan promised on camera that World Cup 2018 would be a “festival of violence.” That’s one reason why, in January, the Russian city of Rostov was still threatening to keep beer out of its stadium. The city had officially classified the stadium as a place of “mass gathering,” which gives it an exemption from the law allowing booze sales. In response, ABInBev threatened to sue the city.

Oraz Durdyev, the corporate affairs director of Sun InBev, the regional subsidiary of ABInBev, complained to a Russian news outlet that, “Regional authorities hosting World Cup matches are introducing initiatives which contradict Russian federal law and restrict the sponsors rights. Beer has always been an inseparable part of Western football culture; that’s why we don’t want to deny football fans from all over the world an opportunity” to drink it. Rostov has reversed course and is now allowing beer sales at World Cup matches.

AbInBev wouldn’t answer my questions about its lawsuit threat or the pressuring of Russian entities to compel alcohol sales. But a spokeswoman seized the opportunity to hype ABInBev’s plan to also offer alcohol-free beer, even though it doesn’t have to. “Despite softening of regulations of alcohol, we decided to sell both BUD and BUD Alcohol Free at stadiums—and BUD, BUD Alcohol Free and Klinskoe (local Russian brand ) at FIFA Fan Fests—to give consumers choice and promote responsible drinking,” she said in an email.

Alcohol sales weren’t always a World Cup prerequisite. As recently as 2004, FIFA safety regulations featured a total ban on “the sale and public distribution of alcohol…within the confines of the stadium before and during the match.” That changed around 2008, when public health experts suspect the alcohol industry pressured the group to rewrite its rules. That’s also the year Anheuser-Busch merged with the Brazilian-based InBev, creating one of the world’s largest beer conglomerates. ABInBev credited its sponsorship of the 2010 World Cup in the UK for a 36 percent increase in sales of Budweiser there—a sign of just how important beer sales and advertising during matches are for the company.

“This is much farther than I’ve even seen a tobacco company go”…We’re talking literally about a security risk.”

Even so, FIFA’s recent arm-twisting on behalf of its top beer sponsor came as a shock to some US public health advocates. “This is much farther than I’ve even seen a tobacco company go,” says Michael Siegel, a professor of public health at Boston University. FIFA and ABInBev, he says, are “egregiously violating the public health laws of sovereign countries in a way that completely undermines these countries’ ability to protect public health.” He notes that the long-term health issues of alcohol consumption—such as liver disease and increased cancer risk—are dwarfed by the more immediate concerns about spectator safety and the potential for alcohol-fueled violence. “We’re talking literally about a security risk.”

“It would be interesting if they came to the United States and tried to force the United States to change the consumption of alcohol beverages in sports stadiums,” says Raul Caetano, a Brazilian native and senior research scientist for the NIH-funded Pacific Institute for Research and Evaluation in Oakland, California. Caetano, who wrote an editorial about Brazil’s World Cup alcohol conflict for the journal Addiction, says that if FIFA tried to get US alcohol laws changed as a condition of hosting the World Cup—for instance, demanding the drinking age be reduced to 18 for the games—the public health establishment would make sure it didn’t happen. But countries like Brazil and Russia, which struggle to regulate alcohol, don’t have nongovernment institutions to fight back against FIFA and its beer sponsor, he adds.

FIFA may control what goes on in and around stadiums, but Russian cities still have the power to regulate alcohol outside of them. At least one Russian city has vowed to crack down in the hope of staving off a Marseille-style fiasco. Russia’s government has banned the sale of vodka on trains carrying fans to matches, and the city of Moscow is banning alcohol sales at restaurants, supermarkets, and even bars and liquor stores on game days and the days before. If anyone in Moscow wants a drink during a World Cup match, it seems they’ll have to either sneak it in from home or buy Budweiser at the concession stands.