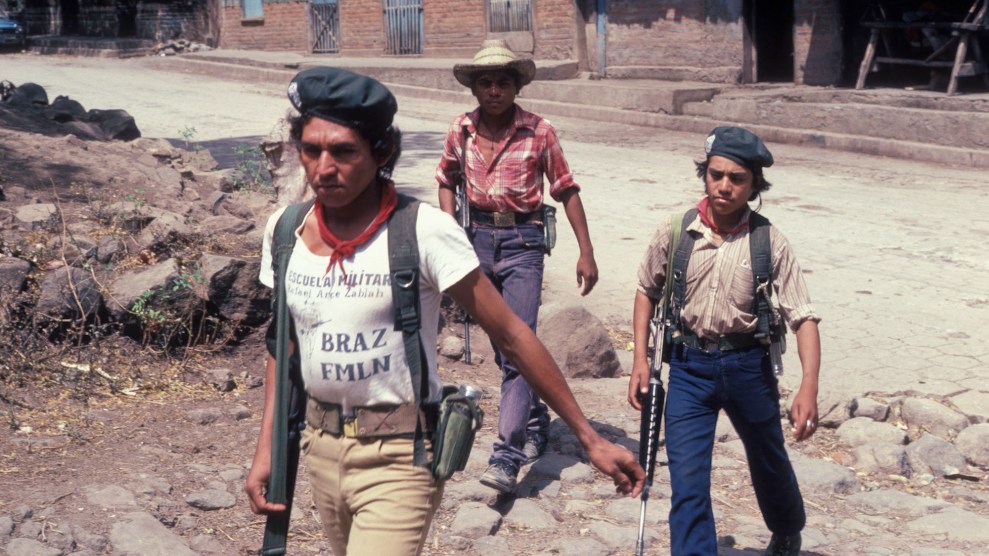 A man wears a shirt with the Spanish initials of the Farabundo Martí National Liberation Front, a left-wing guerrilla group, in San Salvador in 1989.Mario Ruiz/ZUMA

She watched as Salvadoran guerrillas made her husband dig his own grave and then murdered him. She was forced to cook, clean, and wash clothes for the guerrillas under threat of death. But after she fled El Salvador for the United States, she was denied asylum. And on Wednesday, the government upheld that denial because her forced labor constituted “material support” for terrorism.

The problem for the asylum seeker, identified in legal documents by the initials ACM, is that US law prevents anyone who has engaged in “terrorist activity” from receiving protection from persecution. That includes providing material support such as a “safe house” or weapons. The question before the Justice Department’s Board of Immigration Appeals was whether cooking, cleaning, and washing clothes counted as material support. On Wednesday, the board found in a 2-1 ruling that it did.

The ruling comes as the Trump administration pushes to close “loopholes” in the asylum system that it says enable “chronic” fraud, noting that most Central Americans lose their asylum claims. In October, Attorney General Jeff Sessions attacked “dirty immigration lawyers” for their role in promoting “rampant abuse and fraud” in the asylum system. But in reality, many asylum seekers are denied because of court rulings and obscure laws like the one that prevent people like ACM from gaining asylum—people fleeing extreme persecution who would seem to be perfect candidates for asylum.

ACM was pressed into involuntary servitude by Salvadoran guerrillas in 1990, during the country’s brutal civil war. She entered the United States without authorization in 1991 and later applied for asylum. A New York immigration judge, Noel Brennan, denied her asylum claim in 2016 but blocked her from being removed from the United States under the Convention Against Torture, citing her “slavery at the hands of the guerrillas.” The Department of Homeland Security appealed that ruling later the same year, sending the case to the Board of Immigration Appeals. On Wednesday, the board upheld Brennan’s asylum decision and requested that Brennan reconsider the decision to protect her from deportation.

The board found that ACM’s domestic work “aided [guerrillas] in continuing their mission of armed and violent opposition to the Salvadoran Government.” Board members Patricia Cole and Roger Pauley, who joined the board under Presidents Bill Clinton and George W. Bush, respectively, wrote that while her “assistance may have been relatively minimal, if she had not provided the cooking and cleaning services she was forced to perform, another person would have needed to do so.”

The judges ruled that the woman aided terrorists through “the cooking and cleaning services she was forced to perform.”

ACM’s lawyers say they will now appeal the decision to the Second Circuit Court of Appeals in New York. Dawn Pipek Guidone, a Long Island attorney who has worked on the case pro bono since 2004, says the decision “is a travesty of justice.” Nicholas Mundy, a Brooklyn-based lawyer who is working with Guidone pro bono, says that when he first heard about the case, he couldn’t believe that the government was trying to block asylum.

Board Member Linda Wendtland, another Bush-era appointee, dissented from the Pauley and Cole’s view that cooking and cleaning “performed—as a slave—for Salvadoran guerrillas” meets the legal bar for material support. She wrote that the majority’s sweeping definition of aiding terrorists is “without effective limits and would lead to absurd results”:

Brennan said in her 2016 decision that ACM’s distress was “palpable” as she described the “physical and psychological abuse” the guerrillas inflicted. “As she told of the circumstances regarding her husband’s brutal death, she broke down, and when questioned in detail about it had further tears,” Brennan said. She would have granted asylum if ACM had not “cooked and cleaned and washed clothes and otherwise [given] what is ‘material’ support” to her captors. The material support also appeared to include being coerced into shooting at bottles and trees for weapons training. ACM said she found the training repulsive and feigned sickness so she could go back to cooking and cleaning.

The fact that her labor was performed under threat of death was, from a legal perspective, irrelevant. In 2016, the Board of Immigration Appeals ruled in a separate case that there is no exception for assisting terrorists under “duress.” That case centered on Marleny Hernandez, who ran a store and hotel in the 1990s in the small town of El Bordo, Colombia. The Revolutionary Armed Forces of Colombia, the guerrilla group known as FARC after its Spanish initials, repeatedly threatened Hernandez and demanded that she give them food and other goods from her store, according to court documents. Hernandez eventually complied. After she stopped providing assistance and let Colombian police stay in her hotel, the guerrillas attacked her town and burned down her store and hotel. A FARC commander later put a gun to her head and demanded that she stop helping the police. Hernandez fled for the United States soon after but was denied asylum.

One judge dissented from the ruling, arguing that labor “performed—as a slave—for Salvadoran guerrillas” does not meet the legal bar for material support.

Despite the rulings, it is not impossible for people who meet the legal definition of supporting terrorism to receive asylum. The secretaries of state and homeland security can provide a waiver for people who undertook “terrorism-related” actions that make them ineligible for immigration benefits. DHS’s website states that the “definition of terrorism-related activity is relatively broad and may apply to individuals and activities not commonly thought to be associated with terrorism.”

In Hernandez’s case, the appeals board said Congress’ authorization of the waiver is evidence that the law does not include an exception for helping terrorists under duress. Pauley and Cole cited the authority to grant waivers on Wednesday as evidence that there is no “quantitative” limit for what counts as supporting terrorism. Something is either material support or it isn’t, they decided. But to be eligible for the waiver, Guidone says her client would need to concede that she provided material support, a claim that her lawyers strongly dispute.

In February, the Second Circuit in New York denied an appeal from Hernandez. Judge Christopher Droney backed the decision but wrote in a concurring opinion that he had “serious concerns” that the waiver program did not meet US obligations under international law. The 1967 UN refugee protocol, to which the United States is a party, prohibits removing eligible asylum seekers unless they pose a security threat. Droney stated that it is clear that “Congress did not intend to allow DHS to remove otherwise-eligible asylees who do not present genuine security threats to the United States—a description that seems very likely to apply to Hernandez, and perhaps, others like her.”

The Second Circuit may soon have a chance to weigh in on whether forced labor counts as material support for terrorists. Guidone says her client will be vindicated by the appeal. Mundy adds that the case is striking a chord. “The public and the press is realizing how literally crazy that determination is,” he says. “And how unfair and unjust it is.”